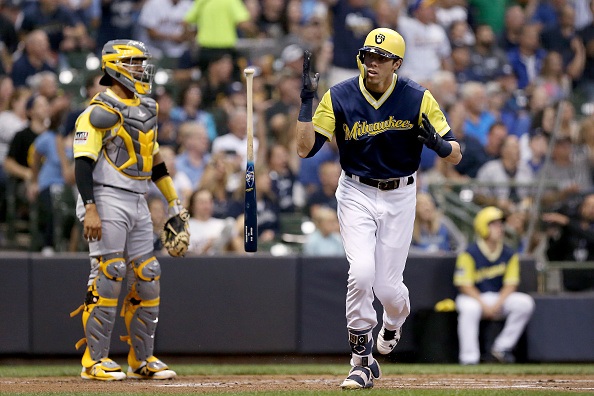 It's time to get back on top! That's the goal for me in Tout Wars. I took part in the 15-team mixed league draft on March 3 for the seventh consecutive year. After finishing fifth in my first season, I took first place the next two seasons. After taking fifth in my quest for a three-peat, I took second place in each of the last two seasons.

This is a 5x5 roto league with on-base percentage instead of average. It's a weekly league with unlimited IL spots. Since I finished second last season, I had the second choice of where to pick. Ray Murphy from Baseball HQ won last season and took the first pick and I then chose the second pick.

Christian Yelich , OF Brewers: Mike Trout went one since it's an on-base percentage league and I decided to go Yelich over Ronald Acuna. It was very close, but Yelich has been one of the best hitters in baseball the last two seasons. I am not sure why he's not in the discussion for the top pick. He contributes in every category and had 22 stolen bases in 147 games in 2018 and 30 in 130 games last season. I know he's coming off a broken kneecap and has endured back issues the last few seasons, but even if he runs less, he should still get 15-20 steals. Yelich gets a slight advantage over Acuna in on-base percentage with a .402 and .429 OBP the last two seasons.

Austin Meadows , OF Rays: I don't like the turn when picking in the front end of the draft in 15-team leagues. A lot of injuries have dropped players down the board, pushing others up. I was set to take Starling Marte and he went right before me. Meadows is one of the few Rays that shouldn't platoon. He fared well against left-handers last season and could do a little of everything. He stole 12 bases but was caught seven times. Meadows has the skill set to return this value and more.

Mike Clevinger , SP Indians: There was no one that stood out to me with this pick. I thought about Ozzie Albies , but I decided to get a pitcher and take the risk with Clevinger. Remember, this draft was before the shutdown of baseball. I play for the entire season and believed Clevinger wasn't going to miss many starts. Worst case, he would be back end of April. In 126 innings last season, Clevinger still finished as a Top 20 SP. He went 13-4 with a 2.71 ERA, 1.06 WHIP, 33.9 percent strikeout rate and 7.4 percent walk rate.

Manny Machado , SS/3B Padres: I was hoping to get Matt Olson or Yoán Moncada and both were gone. Machado has multiple-position eligibility and has played at least 156 games in five straight seasons. While he didn't have a great season last year, it was his first season in San Diego after signing a big contract. There's always an adjustment period. He still had 81 runs, 32 home runs, 85 RBIs, five stolen bases and a .334 OBP.

Eloy Jiménez , OF White Sox: No pitcher stood out and I was a little hesitant to take a third outfielder. I like to take the best players in the first few rounds, so decided not to worry about it. The other player I considered was Bo Bichette , who I took in the TGFBI league. Jimenez is one of the top young hitters in baseball with 69 runs, 31 home runs, 79 RBIs and a .315 OBP in 122 games. It was his rookie season and it's possible the OBP gets better. Jimenez improved in the second half and has a very high ceiling.

Josh Donaldson , 3B Twins: I was set to take Nelson Cruz or Rhys Hoskins , but both went before me. I was surprised Donaldson lasted here. Donaldson played 155 games last season and had a .379 OBP. He has a walk rate of at least 14.2 percent for the last four years and he's in one of the best lineups in baseball. He had 96 runs, 37 home runs and 94 RBIs.

Corey Kluber , SP Rangers: Kluber has moved up my draft board based on the spring. He's healthy and looked sharp. There's been good movement on his pitches and while he struggled last season before injuries ended his season, it was a small sample. It was Kluber or Frankie Montas and it was a close call.

Zac Gallen, SP Diamondbacks: This is where roster construction comes into play. I really wanted Kyle Schwarber , but he would have been my fourth outfielder in eight rounds. When you do this, it can handcuff the options as you go through the rest of the draft. I went with Gallen since he has a good skill set and in the second half last season, he had a 2.51 ERA.

Taylor Rogers , RP Twins: I had a feeling a closer run was about to start. I like to get at least one solid closer in a 15-team league and a ninth-round price is solid. After I took Rogers, the next three picks were closers and two more closers went in the round. Seven more closers went in round 10, so I timed it correctly. Rogers has been excellent the last two seasons and the skills show he will be again in 2020.

Byron Buxton , OF Twins: No, I am not a Twins fan. Yes, there team is excellent for fantasy. I really wanted Franmil Reyes , but Rudy Gamble took him three picks before me. I thought I needed some speed and went with Buxton over David Dahl . Buxton was good last season when he played and yes, injuries and playing time has been a problem for Buxton. In 87 games, Buxton had 48 runs, 10 home runs, 46 RBIs and 14 stolen bases. This is an area of the draft where you take these risks after building a solid foundation.

Julio Urías , SP Dodgers: Urias pitched in several different roles last season coming off shoulder surgery and the velocity was back and had a 13.7 percent swinging strike rate. Urias is one of the top young arms in baseball on a good team. While 150 innings might be tops, I will take it.

Lourdes Gurriel Jr., OF Blue Jays: Gurriel was working on his plate discipline with two strikes in the spring. In 84 games last season, he had 52 runs, 20 home runs, 50 RBIs and six stolen bases. He landed on the IL in August with a left quadriceps strain and struggled when he returned. He has a lot of power and will hit third or fourth in the Blue Jays lineup and get a lot of RBI opportunities with Bichette and Cavan Biggio in front of him.

Scott Kingery , 3B/OF Phillies: Kingery had 19 home runs and 15 stolen bases last season after a disappointing rookie year. He hits a lot of line drives and fly balls and could be 20-20, although the OBP is low.

Ryan McMahon , 1B/2B/3B Rockies: McMahon gets a boost with eligibility at three positions. Tout Wars rules have a player needing 15 games played at the position the prior season. McMahon is expected to play 150 games and has good power.

James Paxton , SP Yankees: I had no plan to take Paxton. As I was looking through potential picks for round 14 and 15, Paxton screamed: “take me!” Since I was picking second, I looked at the roster of Murphy, who had the one pick. He has six pitchers and took five consecutive pitchers. I took a risk and thought he wouldn't take another pitcher and took McMahon with the hopes Paxton would be back to me in round 15 and I was correct. Paxton has a great skill set and injuries are always a factor with him and 160 innings is the expectation. With unlimited IL spots, it was an easy call. It looks better now with baseball being shut down.

Brandon Lowe , 2B Rays: Lowe had 17 home runs and five stolen bases in 82 games last season. He hits a lot of line drives, fly balls and hits the ball hard.

The Rest of the Team

Round 22 - Teoscar Hernández , OF Blue Jays

I am pleased with the team and realize there are a few issues. The on-base percentage looks low, but there are several hitters that are young and can improve the walk rate to help get on base more. I have one solidified closer. Helsley could close for the Cardinals and Magill could close for the Mariners after notching some saves late last season. He was slowed by a back injury in the spring. While Nick Anderson is a dominant arm, Alvarado could get some saves for the Rays.

I like my pitching a lot, especially if Clevinger and Paxton don't miss much time. I expect at least one or two of Houser, Cease, Peralta or Burnes to emerge. The draft is one piece of the puzzle and I will work to make this team a contender.