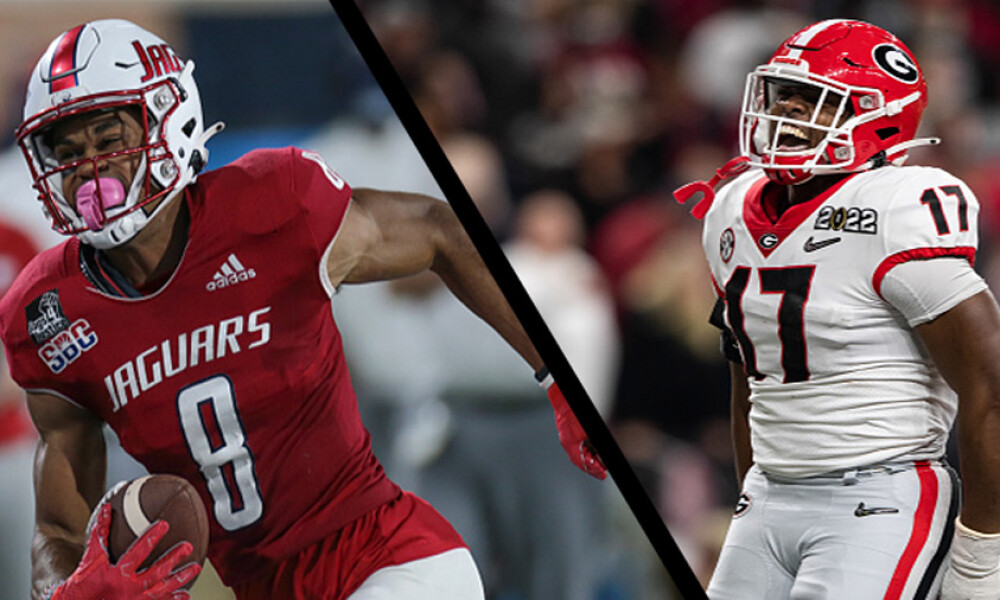 It's time to look toward the upcoming fantasy football season following the 2022 NFL Draft. Let's hand out some draft grades for the NFC East teams. It's important to know the incoming NFL rookie class – whether you're participating in fantasy football mock drafts, preparing for dynasty rookie drafts, or drafting best ball fantasy teams. Before you finalize those fantasy football rankings for the 2022 NFL season, let's take a look at the top offensive and defensive college football players who will make an impact on their new teams. Without further ado, let's dive into the NFC East and hand out draft grades for the Dallas Cowboys, New York Giants, Philadelphia Eagles, and Washington Commanders.

If you're looking for NFL Draft grades for other divisions and teams, check out my other breakdowns here.

Though Dallas fans probably wanted their squad to take a WR in the first round, they should be happy for Jerry Jones’ patience. Snagging Jalen Tolbert in the third could look like a steal in a year or two – much like Michael Gallup, who was also a third-rounder. The Cowboys needed to replace both Amari Cooper and Cedrick Wilson in the receiving corps and Tolbert should be one of Dak Prescott’s top targets right away, especially with Gallup possibly missing the start of the season. Tolbert could’ve gone in the second round, so Dallas was fortunate he was available in the third. The only question is whether he can tear up NFL defenses as he did against lower-level college competition.

Some might give the Cowboys the benefit of the doubt here because of how good the franchise has been at drafting and developing offensive linemen. Still, Tyler Smith was a slight reach at No. 24 overall and he’s very much a boom-or-bust selection in the first round. Ideally, Smith emerges as the next-great Dallas O-lineman and eventually is the team’s starting left or right tackle. Currently, though, his physical tools overshadow his techniques a pro-ready OL and he may be limited to playing guard as a rookie. It’s interesting that the Cowboys took Smith over Tyler Linderbaum (who went a pick later) and/or a defender like Jermaine Johnson, Devin Lloyd, Devonte Wyatt, or George Karlaftis.

The Dallas draft class is your classic boom-or-bust collection of talent with tons of players who could go either way on the development spectrum. We laid out Tyler Smith and Jalen Tolbert, both players with upside to be studs but unproven compared to other top prospects. Second-round edge Sam Williams is another big question mark as he has the first-round ability, but comes into the NFL with off-field legal concerns. Then, five of the Cowboys’ nine total picks came in the fifth and sixth rounds – so it’s wait-and-see on most of them.

Some thought the Giants would trade out of their No. 7 pick, but staying put and grabbing Evan Neal looks like the right decision. Neal can play either left or right tackle right away at the next level with plenty of experience at both spots in Alabama’s offense. He and Andrew Thomas, last year’s first-rounder, will give NYG’s offensive line top-tier bookends for years to come and will help Daniel Jones’ development. Neal is someone who could’ve been selected No. 1 overall in this draft and easily could’ve gone earlier than when the Giants got him.

Unless the Giants trade away Kadarius Toney before the season, this pick of Wan’Dale Robinson is very confusing. Toney and Robinson have very similar skill sets and it’ll be tough to have both on the field at the same time. Even still, Robinson joins an NYG receiving corps that still has Sterling Shepard, Kenny Golladay, Darius Slayton, and Saquon Barkley – not to mention tight ends Ricky Seals-Jones and Jordan Akins coming over in free agency. Did the Giants really need to take another receiver with this second-round pick? Plus, they arguably reached on Robinson over other talented wideout prospects like John Metchie III, Alec Pierce, Skyy Moore, and Tyquan Thornton.

Having two picks in the top 10 helps, but it’s hard not to love how the Giants got both Kayvon Thibodeaux and Evan Neal – both of which could have gone No. 1 overall. Credit the NYG front office for not overthinking it and simply grabbing two of the top talents in this draft class instead of trading down. The rest of the draft class, though, is a bit of a question mark with a few notable reaches. Wan’Dale Robinson and Joshua Ezeudu both went earlier than expected in the second and third rounds, respectively. Overall, though, Neal and Thibodeaux are blue-chip talents and should be core pieces for the Giants for years.

It’s honestly mind-boggling that Nakobe Dean fell all the way into the third round as the 83rd player off the board. This could be one of the biggest steals of the draft as Dean is the reigning Dick Butkus Award winner (given to college football’s best linebacker) as a leader/captain of Georgia’s national title defense. He dropped in the draft because of a slighter frame (5-foot-11, 230 pounds) and pectoral injury concern, but he’ll be a welcome addition to an Eagles defense that’s been longing for more production from the middle linebacker spot. For what it’s worth, GM Howie Roseman doesn’t seem worried about Dean’s health. Plus, check out how excited head coach Nick Sirianni was at the post-draft presser:

Fans who don’t mind their team building for depth in the draft will love this pick. Cam Jurgens is the Eagles’ eventual replacement at center for Jason Kelce, who may be retired this time next year. Until Kelce is gone, which may be longer than just one more season, Jurgens is a backup at center and/or guard and Philly spent a second-round pick on him. The Eagles could’ve used this selection to address a big position of need in the secondary at either corner or safety. Maybe Jurgens looks like a great pick in a couple of years, but there was plenty of talent available in the mid-second that could’ve strengthened the roster in other areas.

Philadelphia’s draft has to be taken with a grain of salt considering they made multiple trades involving 2022 picks. The acquisition of A.J. Brown certainly overshadows an Eagles draft class that only includes five players when all the dust settled – but they got quality players with each selection. The move up to get Jordan Davis at No. 13 overall should strengthen the defense right away and for the long-term as Fletcher Cox’s eventual replacement in the middle of the line. We went over the possible steal and upside of Nakobe Dean in the third. Though Cam Jurgens is a depth pick, it’s tough to knock Philly’s plan to build for the future at center. Sixth-rounders Kyron Johnson and Grant Calcaterra should actually contribute as rookies with athletic upside. In fact, it’s worth noting that Next Gen Stats says the Eagles had this year’s most athletic draft class.

There’s a real scenario where Washington’s fifth-round pick becomes one of Carson Wentz’s top targets as a rookie. Though Terry McLaurin, Curtis Samuel, and first-rounder Jahan Dotson should lead the way, none of them are bigger-bodied pass-catchers that Wentz has favored in the past. He had success with Alshon Jeffery/Zach Ertz/Dallas Goedert in Philadelphia and Michael Pittman Jr./Mo Alie-Cox in Indianapolis and Turner could easily fill that role with his 6-foot-7 frame. Plus, adding Turner will help the Commanders ease Logan Thomas back in following his ACL tear last year.

Washington spent first-round picks on defensive linemen each year from 2017 to 2020, so we know the franchise values building the front seven. Still, this second-round selection of yet another D-lineman seems a tad unnecessary with other positions of need that could’ve been addressed – especially after going WR in the first round. Phidarian Mathis should be a run-stuffing beast in the middle, but he’s currently blocked for significant playing time fellow by Alabama defensive tackles Jonathan Allen and Daron Payne. At least we know the Commanders’ run defense should be formidable, but there were a ton of other talented prospects to be had in the second round.

Though Jahan Dotson is an exciting prospect, you have to wonder why Washington moved down from No. 11 overall and missed out on Kyle Hamilton, Jameson Williams, and Chris Olave. Besides Dotson, who should start right away in the Commanders’ receiving corps, most of the team’s draft choices were for depth. We outlined Phidarian Mathis above. Third-round RB Brian Robinson Jr. is still in a backfield with Antonio Gibson, J.D. McKissic, and Jaret Patterson. Fourth-rounder Percy Butler could emerge as a starting safety but he’s just a backup for now. QB Sam Howell has upside, but he’s stuck behind Carson Wentz and Taylor Heinicke – and there’s a reason he dropped to the fifth round. Overall, there’s some promise to all the selections but there’s nothing flashy to the Washington draft class.