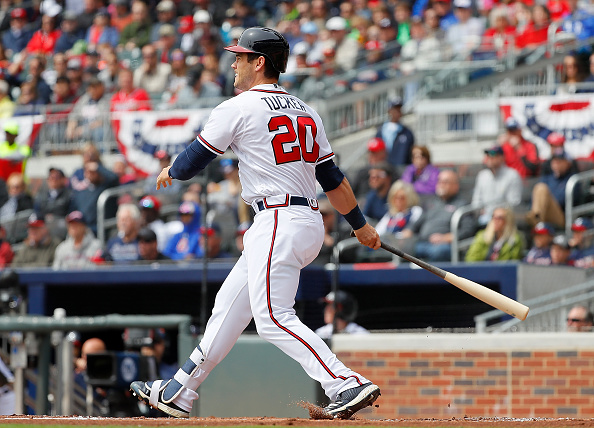 Its baseball season and we are in full swing! It feels amazing to have games going every day and already being fully immersed in the grind that is the fantasy baseball season! If you’re new to the site or just forget how this article works since last week, let me offer a quick refresher.

This week’s featured category is……. HOME RUNS AND RBI!

I’m going to quote Fantasy Alarm’s own Greg Jewett here for some insight on Tucker. This information would have been found in the Draft Guide, so hopefully this is your second time seeing this!

“He endured an injury-riddled season last year but, in 2016 he displayed the ability to hit his fly balls and line drives at an average of 96.3 MPH and reaching the 95 MPH-plus barrier 41.5 percent of the time. His new ballpark in Atlanta will suit his swing well and players in NL-only formats could profit with a cheap investment.”

I know it’s early, but right now, Tucker is useful in far more than NL-only formats. He should be owned in all formats due to his hot start to the year. He’s reached base in every game this season, including multiple times in all but two games. He’s homered in each of last two games, driving in six runs in the process. His OPS stands at 1.264, which is pretty good I believe.

This was talked about in the podcast with Nate Miller yesterday, but just because Tucker was dropped by the Astros doesn’t mean that he’s a bad player. They had such a surplus that Tucker was expendable, even after hitting 24 home runs with 96 RBI at the Triple-A level last season.

Lefties at SunTrust Park get a nice boost in fantasy circles, which fits Tucker quite well. This, along with his current play, is going to shoot him up the most added lists. Oh yeah, his next three games are at the launching pad that is Coors Field. GET HIM NOW!

Anderson’s ownership is on the rise and rightfully so. His three home runs trail only Bryce Harper, Brian Dozier, Charlie Blackmon and Matt Davidson, along with the five other people he’s tied with at his home run total. Of the players with three or more home runs, Anderson is the only one with more than one stolen base. In fact, Anderson is tied for the league-lead with three stolen bases. He’s hitting for power, he’s swiping bags, his OBP is .333 and his batting average of .300 isn’t completely inflated by a sky-high BABIP. His BABIP is average at a modest .300.

To put things in perspective, Anderson’s current batted ball rates are very comparable to Minnesota’s Brian Dozier (via Fangraphs). Sure, it’s a small sample size, but it is worth noting.

This is a player whose ownership is going to skyrocket if he continues this time of performance, so it’s time to get your shares of him now, if you didn’t draft him or scoop him up already. His ownership percentages currently sit at 62 percent on ESPN and 68 percent on ESPN, and in fact, he’s the 13th-most added player in the past few days. Furthermore, he’s the second most-added shortstop.

Alonso is owned in 64 percent of ESPN fantasy baseball leagues, but just 51 percent of Yahoo fantasy leagues. Both of those numbers are too low for a player of Alonso’s caliber. He slugged a career high 28 long balls in 2017, along with an impressive .235 ISO and .501 slugging percentage. Through six games this year, Alonso has swatted two long balls and his current slugging percentage of .545 would be a career high. It’s a small sample size, but he’s noticed a sizable jump in his hard hit percentage this season, up over seven percentage points from last season. However, his soft contact percentage increased by over five percentage points.

Not only was he a power source entering the season, but he has a nice matchup coming up against some vulnerable pitching staffs. After this series with the Kansas City Royals, Alonso gets to face the Tigers, Blue Jays, Twins and Baltimore Orioles, with the last matchup being in the hitter-friendly confines of Camden Yards. It’s time to pounce on him now, because his season total of two home runs is going to jump in the next two weeks with these favorable matchups. 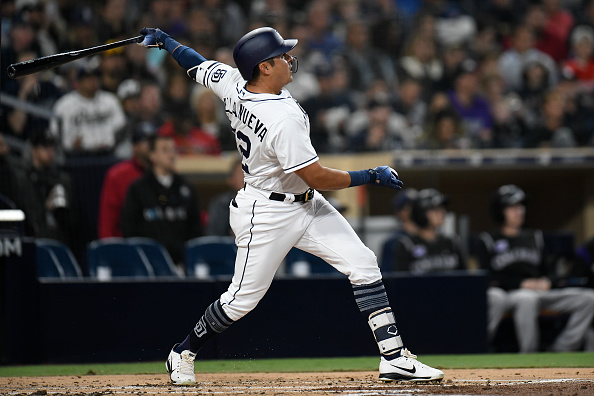 Sure, Villanueva just had a three-homer game, which certainly boosted his appeal for making the cut for this article. However, there’s more to it than just that one game. There’s more than just the four home runs he hit in 32 plate appearances last year with the team. In Triple-A in 2015 in the Cubs’ system, he hit 18 home runs with a .178 ISO in 123 games. After a one-year hiatus, he smacked 20 home runs with a.231 ISO in the San Diego farm system. Strikeouts were a huge problem (31.3% in 12 games with the Padres in 2017), but at Triple-A in 2015 and 2017, he posted strikeouts rates of 15.7 percent and 18.3 percent respectively.

Villanueva posted a total OPS of .750 or higher through every stop in the minors and he seems capable of making a big splash in the power department at the big league level. With regular playing time, he could post a home run total in the low teens, despite playing in a pitcher-friendly park. He’s better suited for NL-only formats at this time, but those in deeper mixed formats can take a chance on the 26-year-old corner infielder.

He’s owned in over 80 percent of leagues on both ESPN and Yahoo, but if you’re a member of a league where he’s in the minority, scoop him up now. Drop whomever it takes, because he’s legit. Hey, he is still available in some leagues, and my excitement for this guy just cannot be contained. Hence his mentioning in this week’s edition of Category Impact.