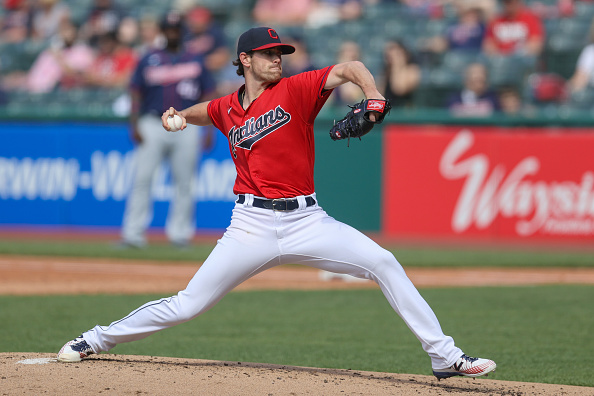 Memorial Day brings fantasy owners a huge slate of 15 top-tier SPs to consider for two-start duty this coming scoring period. On the other end of the pitching spectrum, there are also 15 arms in the bottom group that are not recommended for dual-start work, although a couple-three of those hurlers do have some streaming viability. It is truly a bountiful week with regard to two-start SP options, with an additional handful dwelling in the middle tier for your contemplation, too

This boatload of pitchers consists of those you should be willing to trot out into your lineups for both their scheduled trips to the hill in Week 10. Do not concern yourself with the venue or opponent, simply insert them on their slated day to face the opposition bats and reap the rewards (for the most part).

Kaprielian picked up this first quality start (QS) although to be fair, he has tossed just three games in 2021 to date. He sports a superb 1.53 ERA and 0.91 WHIP through his limited 17.2 IP, and has also racked up 19 Ks over that small sample size. He is on the road for both his Week 10 appearances, the second taking place in Coors Field, so some negative regression with regard to his excellent ratio stats should be expected.

German’s ratios are not as eye-popping as the Oakland SP profiled immediately above, but a 3.06 ERA and 1.08 WHIP are nothing to sneeze at, either. He demonstrates good control, having allowed just 10 walks over his 50.0 IP, while collecting 47 Ks during that stretch. He has a couple of difficult matchups on deck, but both are at Yankee Stadium.

Velasquez, on the other hand, has a pair of great matchups in store this coming scoring period, although he does have to pitch in Cincy for the first contest. The Philly righthander has two QS in his last five appearances, and came within one out of collecting a third such result. He is an excellent source of Ks (11.0 K/9 through 36,2 IP, although the walks are an issue (5.4 BB/9).

The veteran righthander, Morton, is past his earlier struggles these days, having allowed just a single earned run over his past two starts, lowering his season ERA to 3.98 in the process. He is generating a bunch of groundballs while on the mound, as well as missing tons of bats (10.6 K/9 over 52.0 IP this season). He gets an opportunity to improve his home splits with a pair of games at Truist Park this coming week.

McClanahan, the rookie southpaw, has yet to pitch deep enough in a game to qualify for a QS, but he is sitting on a 2-0 record even so. He is also showing off both his command and control with a 10.5 K/9 and 2.3 BB/9 pair of ratios on the season. He has a couple of away games coming up, although the contest at the end of the week in Arlington profiles as the better matchup.

Pivetta has yet to suffer a defeat when toeing the rubber in 2021, featuring an unblemished 6-0 record after defeating the visiting Braves in his most recent outing. The free passes are concerning (4.4 BB/9 through his 10 starts) but he is also missing loads of bats as demonstrated by his 9.9 K/9 over his 53.2 IP. His two starts are on the road, but given his home/road splits since 2019, that is not a huge concern.

Stroman has been an overall dependable arm this season, stumbling only twice in his 11 starts to date. He brings a stellar 2.45 ERA and 1.06 WHIP into the current week’s contests, when he heads west to take on two squads he has yet to face this season, the Diamondbacks and then the Padres. He offers below average strikeout potential, and his underlying metrics indicate that his stats may be due for a negative regression to mean soon.

Strasburg, once a perennial upper tier denizen, suffers from the injury bug too often to be a wind ‘em up and forget ‘em option these days. His control has been spotty over his four starts in 2021, although he does benefit his fantasy owners by striking out nearly a batter per inning (8.9 K/9). In addition to having two road starts this coming week, his team is not exactly playing like world beaters, both of which limit his desirability in Week 10.

Richards was within an out of collecting his third consecutive QS, but that begs the question of whether he could have kept the earned run tally at just three when he was lifted from the game. Both his starts are away from Fenway this week, but that is not necessarily a concern given his home/road splits this season. The below average K rate and inflated walk rate (4.3 BB/9 through 54.0 IP) are of more concern.

Kelly did not figure into the decision in his latest outing, but did twirl his third consecutive QS in that game. He gets to take on the Mets away from Citi Field, a positive for the Arizona righty, and then heads to Milwaukee for a contest against a sub-.500 home team in the Brewers.

Cueto has had a pair of good games in May, and a couple of forgettable outings. He has two home contests, the first against the less than intimidating Angels. His ability to limit the free passes (1.4 BB/9) and the long ball (0.5 HR/9) are positives, even as his K rate is simply pedestrian (7.5 K/0 through 37.1 IP).

These are the dual-start options that are not suggested as being used for one or both of their times atop the bump. Urquidy is just coming off the IL with a shoulder issue, so caution is advised initially with him. Peacock at home against the Mets has limited appeal. The balance are not recommended arms to trust if you value your ratio stats.

Both sides of this matchup have some appeal for streaming purposes. Gant has yet to allow more than three earned runs in a contest, and that took place only once in his nine starts. It is his lack of control that is most worrisome with a 6.2 BB/9 rate over his 44.2 IP, accounting for the inflated 1.57 WHIP. Price was dominant as an opener against the Giants in his most recent appearance, snagging five Ks over his 2.2 IP. The thought is that he will be stretched out into more a regular starter, should these results continue, and he is an intriguing low-owned (22.6% ESPN, 31% Yahoo) SP option.

Over his last seven starts, the BoSox veteran southpaw has posted an attractive 2.68 ERA and 1.19 WHIP with 36 Ks over those 37 IP. The road warrior has a road contest, which makes him even more useful (potentially).

Fleming has been used in long-relief and as a starter for the Rays, and this is developing as one of the latter early on this holiday weekend, but keep an eye on the situation if you plan on employing the 25-year-old lefthander for your fantasy rotation. The K rate is lacking in panache (5.1 K/9) but the ratios shine: 2.88 ERA, 1.06 WHIP through 40.2 IP. Granted, not the best matchup here, facing the Yankee ace on the road.

Poteet had his first stumble against the Red Sox, handing out five earned runs in his last outing. He did collect six Ks over his 4.1 IP, and this matchup has much better potential for the rookie to get back on track, facing the last place Pirates.

Dunn has yet to allow more than three earned runs in an appearance, as evidenced by his useful 3.40 ERA acquired over his 39.2 IP in 2021. He has average K ability (8.4 K/9), but needs to harness his control or the free passes are sure to come back to haunt him at some point (5.7 BB/9). Fortunately, the Angels are last in the majors in walks collected.

A Rockie SP at home does not usually suggest streaming possibility, but the 27-year-old southpaw has been having exceptionally good results taking the hill in Coors Field. Limited sample size, to be sure, and the first-place A’s could throw a monkey wrench into the workings, certainly, but he is a hot hand to exploit currently. He strikes out better than a batter per inning (9.3 K/9) and keeps the ball consistently on the ground, which limits the dingers.

Cobb returned after missing a couple of starts due to a blister issue, and held the visiting Twins to just a single earned tally on four hits and no walks, while collecting four Ks and the victory. He has a home game to close up the week against a less-than-daunting offense in the visiting Mariners.