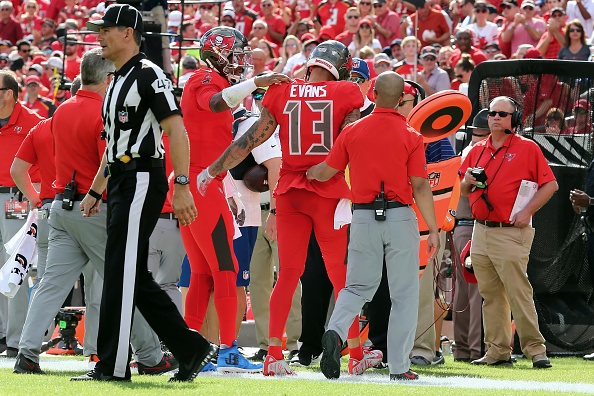 What a wild week 14 it was for NFL injuries! This report is quite a big one, with lots of implications for many teams as they head into week 15. A few major names will top the list, while a few other key names could present some much larger roles for secondary position players. Let’s look at how it shook down for week 14, shall we?

Mike Evans (TB-WR)- Evans went down with a hammy injury in Sunday’s game against the Colts, and never returned. Evans and Godwin are both sitting in the top 5 for the season in PPR formats, and this could lead to a huge surge of targets for not only Chris Godwin , but also for Breshad Perriman . Evans had already caught two of six targets with one going for 61 yards to the house before going down, and being ruled out for the rest of the game, AS WELL AS the rest of the season. Perriman already playing the WR3 for the Buccs, could likely see a much larger up-tick in targets now. He has been quite busy over the last two weeks so far, putting up 13.70 and 16.00 fantasy points with 11 total targets, 157 yards receiving, and a TD. A couple of other beneficiaries of the Evans injury will be Justin Watson , who caught five balls on eight total targets for 59 yards and a score, and OJ Howard who also saw a decent work day with four catches for 73 total yards. Howard has put up back-to-back 11+ point fantasy efforts, while seeing 11 total targets as well over his last two. Interesting pick-ups if need be going into week 15.

Patrick Mahomes (KC-QB)- Mahomes took a shot to his hand during Sunday’s win over the New England Patriots, but it doesn’t seem to be serious. Mahomes was able to stay in the game and play the whole second half, however, the play-calling was tailored a bit more for his hand injury, as no long, deep passes were essentially called. Coach Andy Reid reported that the hand had “quite the bruising,” but at least there was not instance of any break of any fashion. Mahomes looks poised to make a Week 15 start, without any injury designation.

DeVante Parker /Albert Wilson (MIA-WR)- Both Parker and Wilson sustained concussions in the Dolphin’s Week 14 heart-breaking one-point loss to the Jets. Parker was coming off a monster game in Week 13 with seven catches on ten targets for a massive 159 yards and two scores. Wilson was also quite busy, seeing five catches on five targets for a small 32 yards. As we can see, both guys made up quite the majority of the WR targets in Week 13 for the Phins, and were already targeted four times this past Sunday before exiting with head injuries. It is unknown how the concussion protocol will go for this week in terms of status for Week 15, as it was reported that Parker’s looked “serious.” If Parker, and Wilson, or both, happen to be ruled out for Week 15, the WR corp for the Phins would likely turn to Isaiah Ford (nine targets – six catches, 92 yards), and Allen Hurns (eight targets – five catches, 68 yards) to lead the team in terms of receiving. It could also benefit pass-catching back Patrick Laird as well, who saw five targets and caught four balls for 38 yards in the loss.

Calvin Ridley (ATL-WR)- Calvin Ridley was having quite the season for the pass-happy Atlanta Falcons. Ridley had already topped his total yards receiving number from last year at 866 compared to 821 all last season, and was likely going to hit over the 1k yard mark in his second year as a professional. That will not happen now sadly. Ridley went down in Sunday’s drumming of the Panthers with an abdominal injury, and now it has been reported that Ridley will miss the remainder of the season due to the severity of the injury. Ridley had already made a big mark on Sunday’s game, as he had already caught all five targets for 76 yards and a trip to the end zone before sustaining the abdominal injury. As far as who will benefit the most with the absence, likely Julio Jones will obviously become a target monster (once again?), also Russell Gage could look to see a big opportunity, as well as with the return of Austin Hooper , who will look to be an avid target of starting QB Matt Ryan once again. Also, look for both Christian Blake and Olamide Zaccheaus to split extended time in the 3rd WR spot as well. 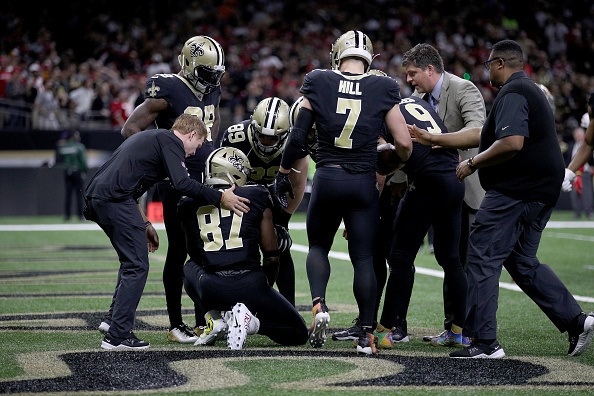 Jared Cook (NO-TE)- Cook also was a victim of the ever-so serious string of concussions that have taken place in the NFL over the course of the season. It was after Cook made a huge impact in Sunday’s show-down with the Niners after catching his second TD of the game, that he sustained the head injury. He only had two catches on the day, but both were huge as they both came in the red zone for TDs. The status is yet to be known, of course Cook will enter the league’s concussion protocol along with many others, and we should have an update on the status for Week 15 later this week. If Cook is not able to give it a go for Week 15’s clash at home with the Colts, look for back-up TE Josh Hill to consume most of the run at the starting TE spot.

Derrius Guice (WAS-RB)- Guice has sustained yet another knee injury for this season. This makes the third knee injury sustained, except this one is not on the severity-scale as his last that side-lined him for most of the season. It was reported that there were no tears in the MCL in this injury, but for cautionary reasons, he has already been ruled out for Sunday’s game against the Eagles. It would not shock anyone one single bit to see the Skins hold Guice out for the remainder of the season, as he is one of their prized draft pieces, and with them out of playoff contention, it just makes a whole ton of sense to do so. Look for both Adrian Peterson , and Chris Thompson to head-line the Skin’s backfield for the remainder of the season, with Wendell Smallwood likely to see a few carries as well.

Rashaad Penny (SEA-RB)- Just as Penny was picking up some steam, and more of the snap-share with starting RB Chris Carson , he hits a spell of bad luck unfortunately. Penny looks to miss the rest of the season with a knee injury that he sustained in the Hawks game last Sunday with the Rams. It was a non-contact injury, which typically turn out to be the worst. Penny had put up 21.9 and 26.7 fantasy points in his two prior games, after Carson had yet another fumbling episode in week 12 leading up to the increased Penny role. Carson will likely be the work horse once again for the Hawks with the injury to Penny, however, C.J. Prosise could potentially see some carries in the Penny role going forward.

D.J. Chark (JAX-WR)- According to Head Coach Doug Marrone, Chark is “day-to-day or week-to-week,” after rolling his ankle in the Jags loss to the Chargers in Week 14. As much as it is being down-played by Marrone, Chark was also spotted strolling around in a walking boot as well, so we can use that as a bit of pre-judgement as well. It doesn’t seem to be very serious, but his status will need to be closely monitored this week heading into Week 15’s clash with the Raiders. Chark has topped 10 fantasy points in all but one road game on the season, and looks to be a continuous point of contact for reverted to starting QB per last week, Gardiner Minshew. They have had a very strong connection since Minshew took over the starting job with Foles out, and now has the job back after Foles soiled himself multiple times in the two weeks prior. If Chark happens to sit, look for increased roles for both Dede Westbrook , as well as Chris Conley . Keelan Cole could also be a potentially under-the-radar sleeper in the event Chark sits as well, as he should see a few snaps in the WR rotation as well.

Alshon Jeffery (PHI-WR)- Awaiting the MRI on Jeffery’s foot/ankle later today, will tell whether Alshon will play this coming week, in two weeks, or maybe not for the rest of the season. Jeffrey was carted off the field after feeling a “pop” in his foot after running a route in last night’s game against the New York Giants. This doesn’t exactly seem to be a good sign per say, feeling “pops” in feet, elbows, legs, etc., never have seemed to be a good thing. However, we will look forward to seeing the results later today, but at this point he is listed as “Out” for Week 15 against the Washington Redskins. If Jeffery is ultimately officially ruled out, then obviously a few options will likely become more relevant. As it is noted that Agholor is still battling his own injury and his status is up in the air as well, look for both Greg Ward and J.J. Arcega-Whiteside to get some extended run, while likely both seeing a nice up-tick in targets as well. Ward was quite busy last night, as he was targeted a hefty nine times after Alshon left the game, while only catching four and missing a few pivotal catches as well. He should likely retain his role, and could be the better option if Alshon misses.

T.Y. Hilton (IND-WR)- Could potentially (hopefully?) return this week after missing his last three games with a calf injury.

Adam Thielen (MIN-WR)- Thelien has now missed five games due to a hammy, but could return this week.

James Conner (PITT-RB)- Conner has now missed his last two games due to shoulder injury, but has already been reported as a “good chance” to play for Week 15.

Josh Jacobs (OAK-RB)- Jacobs fractured his shoulder in the Raiders Week 13 battle with the Chiefs, and ceded way to DeAndre Washington in Week 14. MRI to be conducted this week for more info on future availability.

JuJu Smith-Schuster (PITT-WR)- Ju Ju has missed the Steelers last three games, but is reported that he WILL play in Week 15 against the Bills.

Mark Andrews (BAL-TE)- Andrews was not a participant in Monday’s practice, and with such a quick turn-around playing on Thursday night, Andrew’s leg contusion could ultimately hold him out. Look for Hayden Hurst and Nick Boyle to see added time if he is ruled out.

Gerald Everett (LAR-TE)- Everett has missed the Rams last two games due to a hyper extended knee. He could potentially return this week against DAL, so keep his status monitored.