Howard Bender breaks down both his team and his experience in the 2019 Tout Wars AL-Only Auction Draft. 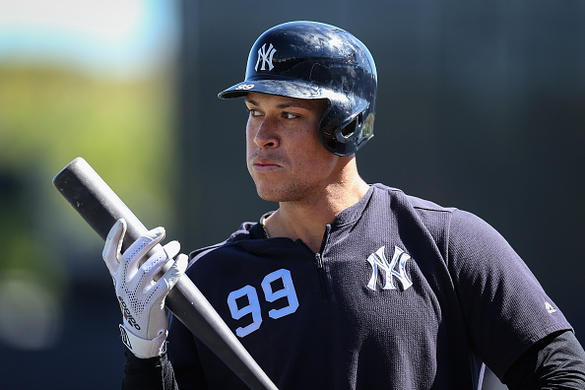 If you have yet to draft your fantasy baseball teams, we believe an inside look into how industry analysts employ their own strategy suggestions can be extremely helpful. Either that or we just like to show you how we’re willing to put our money where our mouths are. There’s nothing worse than reading a series of articles on how to draft from your favorite analysts and then catching them doing something completely different in their own leagues. At Fantasy Alarm, we believe transparency is key to helping you learn to be a stronger player.

The 2019 Tout Wars just took place in New York City this past weekend and you now have a variety of recaps to guide you through a number of different league formats. You’ve got Mixed Leagues with both an auction and a snake-draft from which to learn, a Head-to-Head points league, a new Draft & Hold format, and of course, the traditional AL and NL-only auctions. There is, literally, something for everyone.

The past few seasons, I was in the Head-to-Head Points league, but to my delight, was moved over to the AL-only auction this year. I prefer the straight roto format, but even more exciting was the opportunity to compete against a number of industry analysts who helped me get my start in the industry, including fellow Fantasy Alarm colleagues and defending champions of the AL-only format, Rick Wolf and Glenn Colton. Unseating them will bring me tremendous pleasure, but to do so while also stepping on the throats of Chris Liss, Jeff Erickson, Mike Gianella, Jason Collette and the rest will make it all oh so sweeter.

While I won’t share my thoughts on everyone else’s squads (except maybe Liss’ team), I do think there are certain times where it’s worth mentioning my competitors’ reactions and perceived behavior. Remember, being successful in an auction isn’t just about your own budget and player choices; it’s about reading your opposition and reacting to what their actions are telling you. If you read everyone’s stuff, you know, for the most part, which players they like the most, but body language can go an even longer way.

For example, having recently drafted next to Doug Dennis from Baseball HQ, I learned that, when he wants a player but wants to wait until the bidding slows down so he can come in over the top with his own bid, he transforms into Neil Peart, the drummer for Rush. He taps his fingers and clicks his pen throughout the auction, but once it’s a player he covets, the pace grows much more rapid and I know that, unless I’m willing to go past my budget for the player, I should back off. While I wasn’t sitting next to him in this draft, you know I was listening for the pen-clicking.

Another good one was Nando DiFino from The Athletic. He’s an amazing guy and a fantastic analyst, but unfortunately, he and I were in on a lot of the same players. As he and I went back and forth on a few guys, I realized that, if he was willing to let a player go and maybe just forcing me to spend-up, the eye contact during the bidding (and some good-natured trash talk) was limited. If he wasn’t letting go, it was much more direct and came with that wry smile that, if you know Nando, you know it’s time to back off. It’s how I lost out on Danny Jansen and overpaid for Mallex Smith .

Even more interesting was looking for tells from defending champs Colton and the Wolfman. Obviously, I am very familiar with the SMART System and how they like to draft, but this was just my third auction against them and the first time I was at a disadvantage with bid money, thanks to some early spending on my part. They did an excellent job of maintaining that upper-hand over most of us and until their roster was filled out, very few of us were getting a one-dollar player. Sure, there were some exceptions, but for the most part, every nomination for a dollar was immediately met with a cry of “Two!” from Glenn. He was all business and while the Wolfman and I connected for a few laughs, Glenn was much more stoic and rarely looked up from his worksheets. There was, of course one instance where he cracked a smile and threw out a nice Pitch Perfect reference, but that only came after one of his late “and-one” bids hosed me out of Heath Hembree , a moment he proudly mentions in his own write-up.

So how did I ultimately fare in this auction? Fairly well, I think. It was a tough room with some of the finest fantasy baseball minds at work and while a lot of use came out swinging early, no one went completely over the top. But I’ve got high hopes for this team.

Here’s a look at the Draft Board (just use the tabs at the bottom of the sheet to find the American League) and below are some thoughts on my team.

$45 Aaron Judge – All rise, baby! I told everyone at Foley’s the night before I wasn’t leaving the draft without him, yet no one pushed me to the $50-range. Even paying a buck more for him than Mookie Betts went for didn’t bother me considering I would have paid Mike Trout money for him.

$26 Mike Clevinger – Love his year-to-year growth and should be a dark horse for the AL Cy Young.

$25 Mallex Smith – An overpay, but one of just a few burners Mike Podhorzer didn’t claim for himself.

$19 Jurickson Profar – Heard those dreaded crickets after doing some price-enforcing, but given the cost of guys like Yoan Moncada ($19) and Rougned Odor ($22), Profar and his multi-position eligibility seem like a decent buy.

$18 Ken Giles – A very fair price for one of the few closers with decent job security.

$19 Luis Severino – Bids from $12 to $18 came quickly, I said $19 and then nothing but crickets. If I can get five Severino-like months out of him, then he’s a steal at this price.

$14 Eduardo Rodríguez – Great strikeout potential and if learning the slider from Pedro Martinez gives him a legitimate fourth pitch, look out!

$8 Ronald Guzman – Unpolished, but could be interesting threat if he fixes his plate discipline.

$6 Brandon Lowe – Raw power, decent speed, can play both the infield and outfield and isn’t really being blocked by anyone noteworthy.

Big thanks to the Tout Wars Board – Ron Shandler, Jeff Erickson, Peter Kreutzer, Todd Zola and Brian Walton – for bringing us all together each year. It is both an honor and a privilege to compete with them and the rest of the touts.

And finally, I just want to acknowledge the tremendous, heartfelt words spoken by Ron Shandler in tribute to the late Lawr Michaels who I considered a good friend as well as both a colleague and mentor. The announcement of the new Lawr Michaels Zen & Now Award was great to hear and will surely help keep his memory alive in the industry. When Colton & the Wolfman, clad in A’s gear for Lawr, followed the announcement with a deferment of the opening throw, as Lawr once did himself, we knew the Zenmaster was smiling down at all of us.