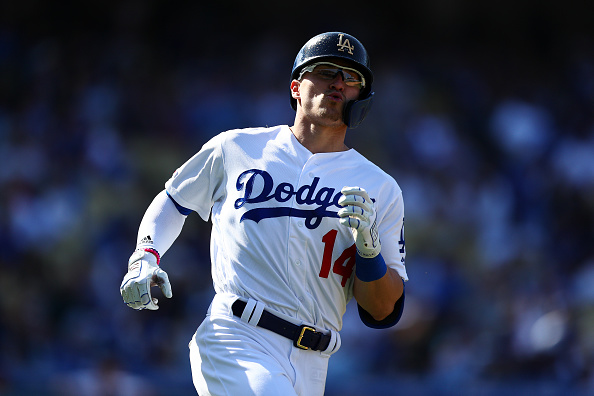 So the season’s in full swing. We’ve gotten past the awkward scheduling of home openers. I’ll never understand why Major League Baseball gives some teams the day off after their home opener, but to each their own. This is a time where unheralded players are off to a hot start. So while it’s exciting to go and grab them you have to temper expectations just a bit. Tim Beckham is swinging a hot bat as of late and the Mariners offense in general looks pretty damn good right now. But it’s a 162-game season and we have a large enough sample size to be skeptic about some hot players based on their performance in previous years. So with this edition of the MLB Waiver Wire you may find some names that might give you pause, but take it with a grain of salt. Let’s dive in to the latest free agent finds to get you through this Hump Day!

Kiké Hernández (Los Angeles Dodgers – Shortstop, Second Base, Outfield) FAAB Bid: 8-12% - If you missed the boat on the previously-mentioned Tim Beckham or Fernando Tatis Jr. then Hernandez is a pretty solid addition if you can get him. Multi-position eligibility is huge in fantasy baseball and Hernandez can give production at a position you may have drafted poorly. In a league as shallow as a ten-team league that may be hard to believe, but it happens. So far he’s started 8-for-24 with three multi-hit games, a pair of home runs, five RBI, and five runs. Here’s the mildly annoying part with Hernandez, he’s hit leadoff (thrice), fifth, and seventh in the batting order. The production likely fluctuates depending on where he’s hitting, but for now he’s a solid addition to any fantasy team.

Adam Jones (Arizona Diamondbacks – Outfield) FAAB Bid: 8% - You don’t necessarily need to spend big for an outfielder, but Adam Jones has looked really good so far at the ripe age of 33. In five games he’s hit three home runs with four multi-hit games. And he’s either hit leadoff or cleanup so he’s in prime spots in the batting order. If playing in a points league just be aware of the fact that he takes a slight hit in this format. He has a 4.4% career walk rate against an 18.5% strikeout rate so to repeat, he gets a downgrade in points leagues.

Trevor Richards (Miami Marlins – Starting Pitcher) FAAB Bid: 4-5% - In his 2019 debut, Richards managed to twirl six innings of one-run ball with four strikeouts. Last year we saw him average nearly a strikeout per inning so don’t be too surprised to see better production than that especially since he had a decent 13.6% swinging strike rate in his first start of the year. He’s got a home start on Wednesday in a pitcher-friendly ballpark so if you can get your hands on him with same day waiver transactions then he’s certainly viable as a streamer.

A.J. Minter (Atlanta Braves – Relief Pitcher) FAAB Bid: 13% - If you’re short on saves you should look to add Minter and don’t hesitate to spend a little to get him. Minter is actually set to return to the Braves bullpen possibly by the end of the Cubs series (Thursday night). Vizcaino may still get a majority of the saves to start off. However, Minter could unseat him and don’t forget Minter was able to get plenty of save opportunities down the stretch last season and Atlanta could easily give him the full-time responsibility if he’s healthy and up to the task. Minter is around 46% owned on Yahoo!, but just 20.2% owned on ESPN so he’s even there in deeper leagues on the latter site.

Austin Barnes (Catcher – Los Angeles Dodgers) FAAB Bid: 10-12% - I’m willing to spend a little more on Barnes because Yasmani Grandal departed in the offseason which opened the door for Barnes to get full-time catching duties and he’s off to a nice start. The downside? He’s hitting eighth in the lineup, often times right in front of the pitcher. But so far he’s 5-for-13 with a pair of home runs and he’s yet to get rung up on strikes. Catcher is probably the position with the most scarcity so if you need help at catcher don’t hesitate to pull the trigger on acquiring Barnes.

Nick Senzel (Cincinnati Reds – Second Base, Outfield) FAAB Bid: 5-6% - Senzel’s stock took a bit of a hit not just when he was sent to Triple-A to start the year, but when he suffered an ankle injury in one of the first games of the season. So that delayed his MLB debut in addition to hurting his fantasy baseball prospects. Recently Senzel’s ownership dipped below 50% in both Yahoo! and ESPN leagues. If he’s available he might be worth a claim especially if his ownership keeps dropping. This could simply be an overreaction on the part of most fantasy baseball players who are desperate to add a player that can contribute immediately. 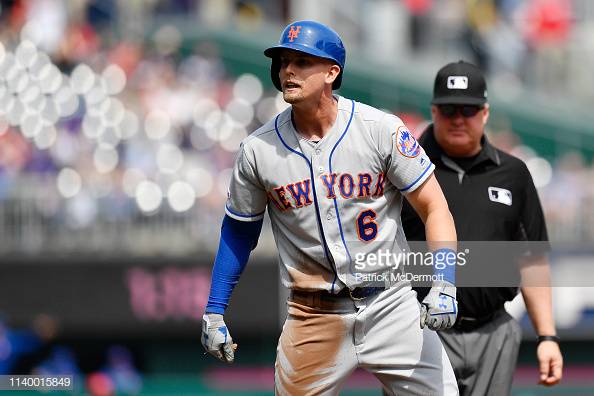 Jeff McNeil (New York Mets – Second Base) FAAB Bid: 5-6% - McNeil has been an everyday player for the Mets so far, which shouldn’t come off as too much of a surprise, but the good news is that he already has second base eligibility but he could register outfield and third base eligibility as well. For the first few games he was hitting either sixth or seventh in the lineup, but on Tuesday he managed to hit in the two-hole and if he can find his way to the top of the order a little more often that will help his fantasy value. So far he’s 6-for-17 with two doubles and a triple so he does possess some pop.

Domingo Germán (New York Yankees – Starting Pitcher) FAAB Bid: 6-7% - You don’t need to go overboard bidding on German because his position in the rotation could be in jeopardy if/when Luis Severino is healthy enough to return. Additionally he may rarely go past five innings of work, which coincidentally is how much he worked on Monday. But he only needed 79 pitches so perhaps he could have gone deeper, but at the same time he did allow five walks. Never fret because he did have seven strikeouts, and again, that’s always been his thing: high strikeout upside with a lot of walks as well. His next start comes against Baltimore who have been a thorn in the Yankees’ side over the past calendar year, but he’s still worth starting for his next outing.

Ryon Healy (Seattle Mariners – First Base, Third Base) FAAB Bid: 5% and Jay Bruce (Seattle Mariners – First Base) FAAB Bid: 5-6% - Both of these Mariners hitters are gaining fantasy consideration. Healy started the year with a RBI in five straight games and a run scored in six straight games. The downside with Healy is that he’s mostly been hitting towards the bottom of the order and he’s gone 0-for-7 over Seattle’s last two games. If the mini-hot streak from the first few games was an apparition, then you don’t need to go too wild spending for him. If you’re in need of power you can take a look at Jay Bruce who is coming off a streak of three straight games with a home run, but he comes with the caveat that he’s just 5-for-35 to start the year, but four of those hits were for extra bases. You likely won’t find yourself starting him every day, but if you can get either of these guys for free then they could be worth a stash.

Caleb Smith (Miami Marlins – Starting Pitcher) FAAB Bid: 2-4% - In the event you’re in a deeper categories league Smith can help out with strikeouts and any ratio categories like K/9 and/or K:BB. Last season we saw him tout a 10.24 K/9 in 77.1 innings of work and in his first start against the Mets this past Monday he collected eight strikeouts to one walk in five innings of work. And that’ll be the downside with Smith. He’s not a big innings eater. In 16 starts last season he only managed to last six innings just five times. But in deeper leagues he’s a good source of strikeouts and won’t cost you much, if anything at all.

Brandon Lowe (Tampa Bay Rays – Second Base, Outfield) FAAB Bid: 1% - Lowe shouldn’t cost you very much because it’s unlikely the casual fantasy baseball player knows anything about him. And to be honest, I’m not crazy about the guy because he still strikes me as a bit of a raw prospect. He struck out 22.9% of the time across the minors last season and 25.7% in the majors, and it wasn’t the greatest start for him in 2019 with five strikeouts in his first nine plate appearances. However, with the injury to Joey Wendle there are more opportunities for Lowe to get some starts. Lowe didn’t get the start on Tuesday night, but Lowe did pinch hit for Daniel Robertson and ultimately finished 2-for-3. Injuries are certainly paving the way to playing time for Lowe so he should be looked at for middle infield help in deeper leagues.

Ryan McMahon (Colorado Rockies – First Base, Second Base, Third Base) FAAB Bid: 1-2% - McMahon, again, had a fantastic Spring for the second year in a row and made the roster coming out of camp and to be fair, he’s had a decent start. But with Daniel Murphy out a month with a fractured finger playing time should be secure for McMahon at first base. The numbers so far have been okay, but you’re picking up McMahon based on the opportunity for the next month, not necessarily what he’s done so far. He’s hit fifth for three straight games and that’s a good spot for him to be slotted in with Murphy out until May.