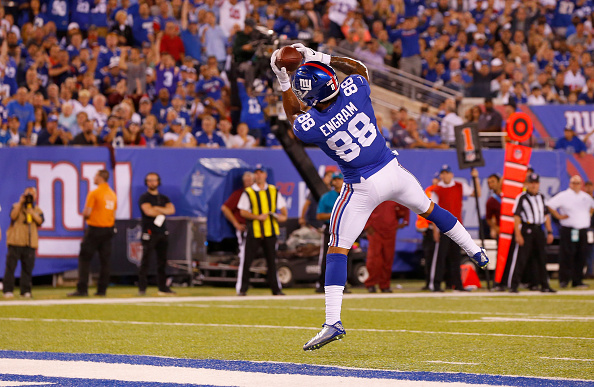 Trading is fun. There’s no doubt about it. Live sport, in my opinion, is the most exciting and unpredictable spectacle in the world. Fantasy sports is an added layer of excitement on top of that. And trading players is yet another layer on top of that. Unless you are some kind of real estate mogul or day trader, where else can you feel like a captain of industry negotiating his opponent into submission for a fleeting moment before the reality of football randomness comes crashing down on your dreams?

One of the beautiful aspects of dynasty is that it facilitates trading. Unlike redraft where the players are evenly distributed via the draft and everyone has the same goal of winning that year, dynasty teams are going to be at different stages of the cycle. Some teams may be tanking, some rebuilding, some going for the ship, and some in decline. And, unlike redraft trades, there doesn’t need to be an immediate “winner” and a “loser”. In fact, if one team sells a young asset to go all in and wins then the rebuilding team wins down the road, both teams can win the trade. And that’s not even getting into how rookie draft picks can help balance the scales and push even the most stubborn of owners towards a deal. If you are a fan of trading and fun and friendship and football, you absolutely need to be in a dynasty league. Or in my case like seven.

So, with that said, let’s talk about tight ends to “buy” in dynasty. We just finished two dynasty “sell” articles: the first covered players to sell regardless of situation and the second got into some situation specific dynasty sells (for instance, guys to sell if you are in “win now” mode versus guys to sell if you are rebuilding and won’t be competing for a year or two). We’ll do the same here with two guys we think are great buys regardless of where your team is and then next week we’ll get a little more specific based on where you are in the cycle. 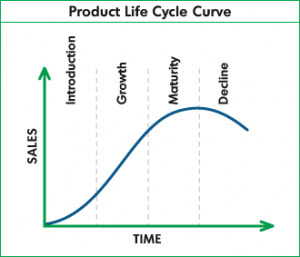 In dynasty there are essentially three reasons to buy. Because you are “win now” and you want the best possible starting players. Because you are rebuilding and you want upside guys to stash. And because you believe there is a market inefficiency between the player’s cost and their value. This player falls squarely into the third category.

First, let’s get into the obvious reason his value has taken a hit – his well-documented injury history. In three years he’s yet to complete a season. Here’s how PlayerProfiler.com depicts his list of ailments. 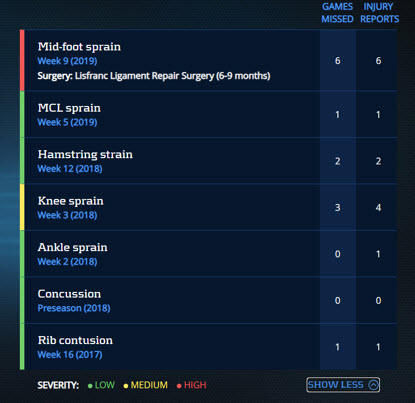 For the most part, things like “rib contusion” or “concussion” are not overly concerning as contact injuries don’t typically lead to future contact injuries unless you have a pattern of them like Jordan Reed with concussions. Despite the red label, even the Lisfranc injury isn’t overly concerning as the University of Pennsylvania School of Medicine conducted a study on injuries to the tarsometatarsal joint and found that, though the recovery can last six to twelve months, most players showed a non-statistically significant decline in performance following their return. Julio Jones , Le’Veon Bell, and Brian Westbrook for instance all had their best career seasons after Lisfranc injuries. No, the concern is obviously related to the pattern of soft tissue injuries in the form of foot, ankle, knee, and hamstring strains. Pretty much the whole damn leg. And though the science on it is inconclusive, there have certainly been players who struggled with consistent soft tissue injuries that derailed their career, notably Arian Foster and arguably Odell Beckham Jr. to a certain degree as well.

Here’s the thing though – I’m not a doctor and I’m not a fortune teller. All I can do is google these injuries or ask someone like David Chao or Jene Bramel . So I’m not necessarily going to discount a guy unless he is actively hurt. With a guy like Engram, I’ll keep an eye on his rehab to see where he’s at and, if it looks good, I’ll look to capitalize. Here is a tweet about Engram from late April.

Evan Engram (and Jabrill Peppers) await word of whether the Giants will pick up their 5th year options (as I've noted, makes absolute sense to pick up both).

Good sign from Engram's IG story: video of the NYG TE running on a treadmill, continuing his rehab from foot surgery.

Shortly after that the team picked up his fifth-year option. That’s all I need to see to put the injury stuff on the backburner. If you honestly know that Evan Engram is going to get hurt, then you should reach out and tell him the future – it’s kind of rude of you not to. For me, I don’t know which guys are going to get hurt or not so, if they aren’t hurt, that’s how I’ll treat them. And once you take that out of the equation you are left with a 6’3” 234-pound monster who was drafted in the first round with the following workout metrics, also courtesy of PlayerProfiler.com 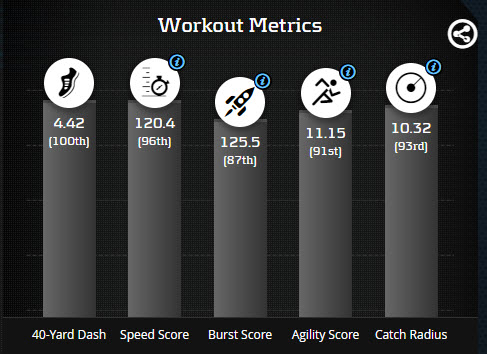 You read that right, one hundredth percentile speed for tight ends. This is a wide receiver that you can start at tight end in fantasy, like Marques Colston his rookie year when Yahoo screwed up and made him tight end eligible. Because he was drafted so young and has made headlines both with his abilities and injuries, many might not realize that he’s only 25. He’s younger than George Kittle , Hayden Hurst , Darren Waller , Tyler Higbee , and just slightly older than Hunter Henry , Dallas Goedert , and Austin Hooper . Since he’s come into the league three years ago, here are the players with the most fantasy points per game per ProFootballReference.com (minimum 20 games).

Pretty interesting names on that list. And this is a guy who has dealt with injuries playing multiple games where he was either banged up or left the game entirely after one catch (based on his game logs, the “injured on the first catch” thing happened at least twice). You aren’t going to find a young upside player out there at the discount he currently has. In my estimation, there are two potential buy windows for him. Right now in the offseason. And early season if Golden Tate siphons off some slot snaps like he did last season. Tate is 32 and this is dynasty. Plus, when Engram gets back to doing stuff like this, it will be hard not to force feed him the ball.

Imagine picking Jared Cook or Tyler Higbee over this 25 year old WR that lines up at tight end sometimes?

In our segment on how offensive scheme affects tight ends, we laid out why Adam Gase was holding Mike Gesicki back and how Brian Flores dramatically changed his usage for the better. The short and sweet of it was Gase basically said “you’re a tight end right? Go block someone” while Flores saw a dynamic piece for the passing game and had him line up in the slot on 71.8% of his pass plays. Not only did he lead the Dolphins in slot snap AND lead tight ends, but it was actually the 11th most slot snaps of ANY player. His 374 slot snaps was one less than Cooper Kupp and more than Jarvis Landry , Golden Tate , Anthony Miller , and Cole Beasley , to name a few.

Why is this important? Well a popular knock on Gesicki is that Dolphins new offensive coordinator Chan Gailey is bad for tight ends. Here’s a tweet giving you some scary surface info. This is the tweet you retweet hoping your league mate that owns Gesicki sees it.

Since 2000, Chan Gailey has coached eight teams. Here are his team TE targets ranking for each year:

There you have it – Jeff Cumberland and Scott Chandler were not superstars with Gailey so it’s an open and shut case. And we can just rule out Tony Gonzalez because he’s Tony Gonzalez right?  Wrong. Rather than looking at the tight end position itself, what you need to be looking at is how Chan Gailey uses “big slot”. Here are some examples from his coaching history (keep in mind, he didn’t coach in 2009, 2013, 2014, 2017, 2018, and 2019 so these aren’t cherry picked but are actually three of his last six seasons).

Kansas City Chiefs: In 2008 Tony Gonzalez played 459 slot snaps, the second most in the league. He finished as the overall TE1.

Buffalo Bills: In 2011 with the Bills the 6’5” 217-pound David Nelson played the most slot snaps of any player in the league and got 97 targets.

See why it matters that Mike Gesicki just played 374 slot snaps at 6’6” 250 pounds?  Oh yeah and here are his workout metrics from PlayerProfiler.com just for fun. 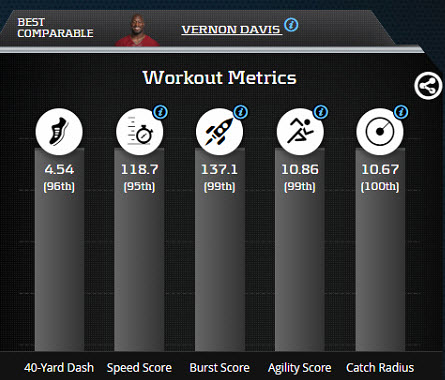 See that comparable player? Vernon Davis ? He had arguably the best combine for any tight end ever. Pretty much all the percentiles are based on him.

The one issue with Gesicki is The Target Conundrum. If you have not read that section of that article you should because it’s the backbone of a lot of our philosophy but it basically says you need to be a top two target on your team to have top half tight end one upside. I know there are a lot of Preston Williams truthers out there but it’s actually not him that scares me. People love “P-Will” in dynasty because they got him for free and it makes them feel all warm and fuzzy inside to find this hidden gem but the reality is he only got the opportunity he did because they drafted no one and traded away Kenny Stills . Basically, he was able to capitalize on a ton of inefficient targets because they were trying to lose. When you take a step back, he’s still an undrafted free agent with ball control issues (counting preseason he was top 5 in drop % and that doesn’t count the plays where he stepped out of bounds against the Bucs or had the ball stripped from him in the end zone against the Cowboys). I mean, he also muffed a punt and he literally fumbled the game away against the Bills. He caught two of his three touchdowns when he was completely uncovered either because the defender fell down (Ravens) or because they simply blew the coverage (Jets). And despite all the targets he only caught 53.3% of his passes. Oh, and he tore his ACL for the second time.

I could go on but let’s just put it this way – if you are concerned about “the target conundrum” would you rather have Mike Gesicki vs. DeVante Parker /Preston Williams/Jordan Howard /Patrick Laird or Austin Hooper /Odell Beckham Jr./Jarvis Landry /Kareem Hunt /Nick Chubb ?  So no, the concern for me in dynasty is not undrafted free agent wide receivers, it’s that the Dolphins decide to go out and sign JuJu Smith-Schuster or Keenan Allen with all their extra cap space next year. That’s a legitimate concern but they already decided not to bring someone on for 2020 so Gesicki is locked and loaded. You could even buy him at his low price then trade him away in the offseason before free agency at his new, high price if you are that worried. Go full Boiler Room or Jordan Beflort with the ole pump and dump. As always, we’ll keep you updated on how we feel along the way but right now he feels like an easy buy. So, go get him.

Statistics for this article were provided by the author, Andrew Cooper, with help from ProFootballFocus.com, PlayerProfiler.com, ProFootballRefence.com, AirYards.com, and SharpFootballStats.com. Follow Coop on Twitter @CoopAFiasco.