Understanding the Importance of Targets In Fantasy Football 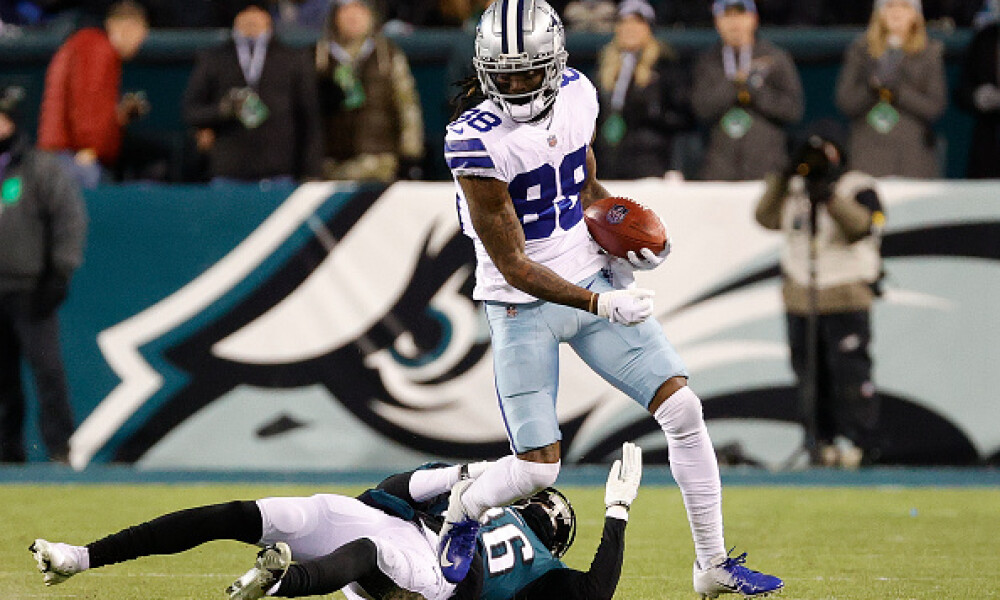 Targets are paramount when it comes to evaluating pass-catchers for fantasy football. There are no receiving yards, no receiving touchdowns, and of course, no receptions without a target.

We want the players on our rosters in fantasy football who will earn these targets because targets are the most important thing to look at when trying to separate one receiver from another on a base level. Sure, the player that earned 160 targets may be a better fantasy option than the player who earned 110, but that doesn’t take into account the offenses these players are in, the target share percentages on their particular team, how deep down the field these targets were earned, and so on.

This season, we’ll take a weekly team-by-team look into these target earners and separate the wheat from the chaff. To properly lead into what we’ll be looking at this season, we’ll have to establish a baseline of the most important things to look at with targets. Everything we’ll be talking about here and this season in my Target Report will be some of the best statistics and metrics that correlate with fantasy football production. Think of targets as a page in a coloring book that’s just the outline yet to be colored. Coloring on that page adds context and flavor to that page. That’s what we’ll be doing with targets — adding more context than just some target totals and saying “go add this player,” which doesn’t help anybody.

We’re better than that.

Let’s color in that page and take a look to see what we’ll be working with this season with the number one goal — to help you all bring home those fantasy football championships!

Targets are pretty self-explanatory — it’s the number of opportunities earned by a pass-catcher. The more opportunities, the better for fantasy football. It’s the highest correlation to fantasy points for wide receivers, one of the highest for tight ends, and a key factor for running backs.

Your best players on offense command the ball and thus, command and earn targets. The offense establishing intent to target a player ends with either a completion or an incompletion. How important are they to fantasy production? Only Mike Evans and Tyler Lockett had less than 115 targets and still finished in the top 20 wide receivers. Volume is the name of the game.

Target share can get a bit more muddied with different offenses and how much they pass skewing these numbers. All target shares are not created equal. Last season, DeVonta Smith had a 22.2% target share on 107 targets as a rookie for the Eagles  Pretty good I’d say, right?

I mean, it’s not bad! But the Eagles had the lowest pass play percentage in the NFL last season at 50.1%.

In contrast, Chris Godwin played 14 games on the offense that passed at the highest percentage in the league (66.4%), had more targets overall in three fewer games, and had a 17.7% target share. The context that separates these two players is the offense they play in.

It’s hard to get targets if you’re not on the field. Not exactly a novel concept here!

The wide receivers and tight ends we’re drafting at the top of fantasy drafts are the ones you’d expect to be running elite route shares and thus, earning a huge amount of targets. Some situations can be a bit tricky.

CeeDee Lamb was being drafted on average at the Round 2-3 turn last season, but only ran 76% of routes last season as he was coming off of the field in two wide receiver sets in favor of Amari Cooper, Michael Gallup, and sometimes Cedrick Wilson. Truly puzzling usage. 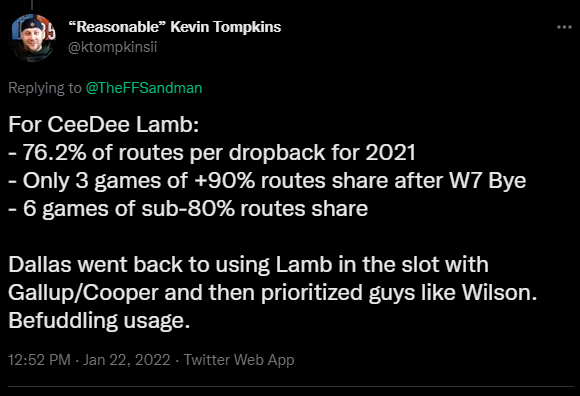 This season, with Cooper off to Cleveland, Wilson off to Miami, and Gallup potentially injured to start 2022, Lamb should run elite routes share this season for the Cowboys. The increased routes and unquestioned top-target status is being reflected in Lamb’s ADP (average draft position) as an end Round 1/beginning of Round 2 pick.

We’ll also dive into yards per route run (YPRR) and targets per route run (TPRR) as they are metrics branching off of routes run that further provide context to find the receivers we should be drafting and rostering this season.

Air yards are the distance between where the pass is thrown from a quarterback to where the intended receiver either catches or doesn’t catch the ball. It doesn’t matter if the player catches the ball, the air yards are recorded regardless.

The path to air yards is:

The purpose of air yards is to provide another way to establish intent of the offense. Quarterbacking and coaching help to provide the opportunity to the pass-catcher and by targeting players, it shows that intent.

The Broncos may not have been good at throwing the ball downfield in 2021 with Teddy Bridgewater under center for the majority of the season, but Courtland Sutton was one of the main beneficiaries of repeated attempts to get the ball downfield, pacing the team with over 1500 air yards and a 33% air yards share.

In addition to Air Yards, there are a couple of other metrics used in conjunction with Air Yards that further flesh everything out: WOPR and RACR.

aDOT is an abbreviation for Average Depth of Target. Simply, it’s how deep down the field a player is earning their targets. It goes from one extreme to the other, with Rondale Moore’s 1.4-yard aDOT to Courtland Sutton’s 15.4 yards. aDOT over a long stretch of targets can be good for defining what receivers’ roles are in their respective offenses.

Take Arizona. We already saw Moore’s 1.4 aDOT, but his targets were very sporadic over his 2021 rookie season, but he was being schemed touches to find space at the line of scrimmage.

On the flip side, DeAndre Hopkins runs routes at all levels of the field, including deep down the field. His 12.3-yard aDOT reflects this even if he didn’t play all of 2021.

At the tight end position, Zach Ertz’s 7.3-yard aDOT reflects a shorter, underneath workload. That’s perfectly fine for somebody who earns targets consistently. Players like JuJu Smith-Schuster and Jarvis Landry fit this mold as target earners who rely on shorter passes closer to the line of scrimmage.

We clearly want deeper targets down the field from our fantasy wide receivers and tight ends, but not to the point where they are ONLY receiving deep targets. DeSean Jackson is the best example of this and he was so good for so long in his career at earning deep targets. Players like Marquez Valdes-Scantling’s 9% target share, 17.9-yard aDOT, and WR66 finish in fantasy points per game? Not great, Bob.

We’ll be winning a lot of championships together, #FANation. We can dive a bit further into pass-catchers to find the ones worth targeting, the ones that quarterbacks are targeting, and the league-winners from the roster-cloggers.