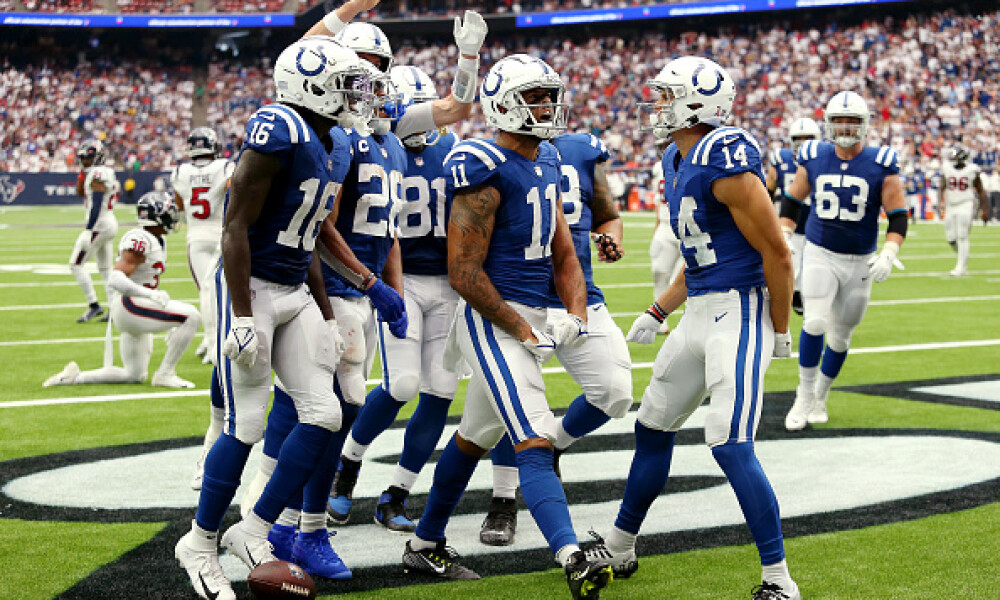 As we look ahead to Week 4, there’s quite a few notable storylines at the wide receiver position that could come into play this week when setting our daily fantasy football lineups. Can rookie sensations Chris Olave, Garrett Wilson, and Drake London continue their strong starts to the season? Does Romeo Doubs solidify himself as the WR1 in Green Bay, and can Zay Jones build on last week’s strong effort? So many questions, but fortunately, there are a ton of great options on this slate for us to look at, and perhaps none better than Michael Pittman Jr. in an AFC South showdown against the Tennessee Titans. Just because you were eager to get someone as a waiver wire add this week does not mean you have to play them in your NFL DFS lineups! If the value is right, then go for it, but be careful getting sucked into that potential trap. Here are my favorite DFS options at wide receiver for your Week 4 NFL DFS lineups, including my top receivers, best value plays, and receiver to fade.

Michael Pittman Jr., IND - There’s not many sure things with this Indianapolis offense through three weeks, but one guarantee is that Michael Pittman Jr. is going to be the alpha in this passing attack. He has at least eight receptions and nine targets in each of the games he has played in this season, and the Titans have allowed the fifth-most fantasy points to opposing receivers this season, including being tied for the league lead in touchdowns allowed with six. The Titans have been one of the worst teams against the opposition’s WR1 this season, and I expect that trend to continue in and through Week 4.

Stefon Diggs, BUF - Buffalo will be fine with throwing it a ton in this matchup. The Ravens have allowed the most fantasy points per game to opposing receivers, and the Ravens rank in the bottom-third in the league in DVOA against the opposition’s WR1. Diggs is averaging 13 targets per game over the last two weeks, and while he didn’t find the end zone last week, the team should have more success through the air this week against the Ravens. Baltimore will be able to put up points, so why not look towards the WR1 in a shootout?

CeeDee Lamb, DAL - Dak Prescott’s absence hasn’t really affected Lamb much if we’re being honest. He has at least 11 targets and 75 yards in both games with Cooper Rush, not to mention a massive 37.1 percent target share. Only the Ravens and Rams have allowed more receiving yards to wideouts this season, and Dallas will move Lamb all around the offense to allow him to thrive in the most advantageous spots against this Washington secondary. The Commanders rank 25th in DVOA against the opposition’s WR1.

Courtland Sutton, DEN - Vegas’ best corner, Nate Hobbs, stays on one side of the field, so Sutton will get away from Hobbs during this contest. In those matchups, he will thrive, as Rock Ya-Sin and Amik Robertson haven’t graded out well by Pro Football Focus’ standards. Sutton has at least seven targets in every game this season, and over the last two in particular, he has at least seven grabs on 10 targets for 97 yards in each game. He’s this team’s WR1, he’s Russell Wilson’s go-to guy, and Sutton has a 26.4 percent target share through the first three games of the season.

Gabriel Davis, BUF - Davis will see more than six targets this week, and I’m confident in that. In such a good matchup, Davis’ upside at his price point is nearly unparalleled, so why wouldn’t we consider him this week? If Buffalo is going to sling it all around the yard, and you want to zig where others zag, take the savings from Diggs and look to Gabriel Davis. Listen, Buffalo is as pass-heavy as they come, and the Ravens have allowed the most yards to wideouts this season, not to mention five touchdowns through three games.

Update: Davis seems like he's going to play, but the ankle concerns may have me only considering him in GPPs.

DeVonta Smith, PHI - I was all in on for a big day from Smith last week, but even I can’t say that I was expecting that type of performance. This matchup against Jacksonville is a bit tougher than last week, but Smith should thrive when he gets into the slot.  He doesn’t go in there all that often, but when he does, good things happen. Out of the slot, Smith has a 3.96 YRR, per Pro Football Focus, and Darious Williams, Jacksonville’s slot corner, has allowed over 17 yards per reception in slot coverage this season. Jacksonville’s outside corners have played well to their credit, but they are vulnerable inside, and Jacksonville has been far better, in terms of DVOA against WR1’s (4th) compared to WR2’s (17th).

Tyler Lockett, SEA - Jeff Okudah has played quite well this season, but the same cannot be said for Mike Hughes and Armani Oruwariye, as those two have really struggled. DK Metcalf will see the most of Okudah in this matchup, which will allow Lockett to thrive against Detroit’s two weaker corners. Geno Smith and the Seahawks have been throwing it more than I would have expected, and Lockett has nine receptions and 11 targets in back-to-back games. Game script should be in his favor, the Lions have allowed the eighth-most fantasy points per game to receivers this season, and Detroit ranks 24th in DVOA against the opposing WR2.

Chase Claypool, PIT - If there were ever a Claypool week, it’s this matchup right here. Rather than attack Sauce Gardner and the Jets on the perimeter, look within, as slot corner Michael Carter II has allowed just under 80 percent of his targets to be caught, not to mention one touchdown and a 153.2 passer rating when targeted, per PFF. Through three games this season, Claypool has 18 targets (11 receptions) and seven rushing attempts, while playing over 90 percent of the snaps in each game. This is his chance for his biggest game of the year and should garner some appeal in GPPs.

Elijah Moore, NYJ - His breakout week is coming, and I’m not going to miss it when it does happen. The Steelers have allowed the seventh-most fantasy points to wide receivers this season, and the Jets are comfortable throwing the ball a ton with Joe Flacco. However, Zach Wilson has been cleared to start, and his willingness to push the ball downfield should allow Moore to thrive. Remember, the last two games that Moore played Wilson in 2021, Moore caught 10 balls for 123 yards and a touchdown across those two games. The two will continue to develop their rapport with one another, and if teams start shading towards Garrett Wilson, Moore is going to break out sooner rather than later. It’s coming, ladies and gentlemen, it’s coming.

Josh Reynolds. DET - The Seahawks rank 31st in DVOA against the pass this year, and Reynolds seems to be the WR2 for this team. He’s coming off a big game where he caught six of 10 targets for 96 yards, and he played at least 70 percent of the snaps for the third straight game. Amon-Ra St. Brown has been ruled out, as has D.J. Chark, further increasing the target share that Reynolds should see in this matchup. He's going to be quite chalky, but the value is plentiful with Reynolds.

Fade Brandin Cooks, HOU - Davis Mills has been bad this year, and while he’s been better at home than on the road, it’s hard to trust any Houston receiver at this point in time. Outside of Dameon Pierce, this offense has been abysmal, and while Cooks has been getting the targets, he has just six catches for 76 yards on 17 targets over his last two games. He dropped a would-be touchdown in Week 2, and a would-be 15+ yard gain last week, but this offense is off as a whole. Until we get a big game from Cooks or Mills once again looks like the guy he was down the stretch last season, we can’t trust Cooks at this price point.