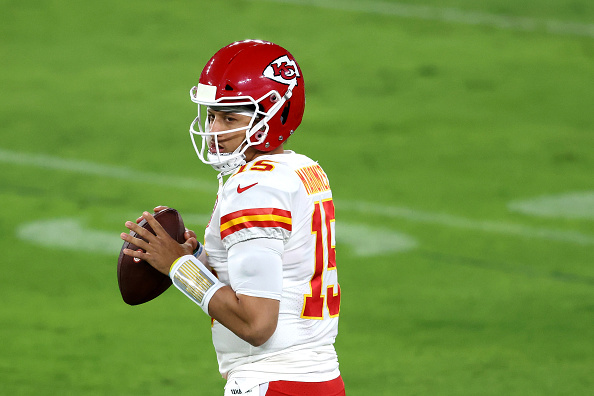 Time to take a look at some Monday DFS with a two game slate!

As always, I encourage you to check out Ryan Hallam’s Weekly Previews to get a deeper look into tonight’s action. In the meantime, here’s a snapshot of each game. Take a read and go build some lineups – remember, I only play GPP tournaments for short slates – then come back and compare to the ones I am leaving here as examples. As always, these are meant to serve as a comparison tool for your own lineups. These aren’t to be taken and submitted into contests as your own.

Here's a breakdown of the two games involved:

What more do you need to know about Patrick Mahomes ? Through three games this season he looks to be back in his MVP form, throwing for 898 yards with nine touchdowns and zero interceptions while completing 67.8-percent of his passes. He is coming off a very impressive thrashing of the Baltimore Ravens whom many considered to have the leagues top defense but Mahomes shredded them for 385 yards and four scores through the air while adding a fifth score on the ground. The Chiefs offense is fully healthy going into this one and I suspect the Chiefs defense will be putting Mahomes in some friendly positions to score today.

On the other side of the football you get Cam…errr…Brian Hoyer . Yep, Cam Newton is on the Covid-IR after testing positive and instead of Jarred Stidham we are getting the veteran Brian Hoyer tonight. What does this mean? Likely not much to be honest. The Patriots obviously will not be running the same RPO-style offense they had with Newton but I still expect a lot of running of the football to control the clock. For his career Hoyer has a 59.1-percent completion percentage with 52 touchdowns and 34 interceptions.

For the Chiefs the answer is pretty straight forward. This backfield is Clyde Edwards-Helaire and no one else’s. Sure, Darrell Williams and Darwin Thompson may get a few snaps but CEH is going to be heavily involved in both the ground and passing attack tonight. On the season he has rushed for 240 yards and a score while adding 11 catches on 16 targets for 102 yards.

With New England the backfield is much more up in the air. Let’s start with the news that Sony Michel has landed on IR and Damien Harris will be active for the first time this season. Harris got all the hype during training camp and figures to be involved in the early down and goal line work. His counter will be James White who is the team’s third-down back. I expect White, who is playing his first game since his fathers tragic passing, to be used often in this one with the likelihood that the Patriots are playing from behind. Between Harris and White is Rex Burkhead who had the monster game last week with three total TDs. Burkhead has the ability to spell both. Lastly, J.J. Taylor. The undrafted rookie has been solid in his limited playing time and figures more to spell James White than the others.

The Chiefs passing attack runs through two primary points and that is Tyreek Hill and Travis Kelce . Hill has scored a touchdown in each game this season as he and Patrick Mahomes are in sync early. Kelce has two touchdowns this season while catching 21 passes for 227 yards. The Patriots are pretty strong against the tight end position and just recently shutdown Darren Waller . Kelce could be in for a tough night if Bill Belichick decides to take him out of the game plan today. For Hill, New England has also done a good job with him in the past, using speed corners and tonight that is going to be J.C. Jackson ’s job most likely. Sammy Watkins is going to draw Stephon Gilmore which means you can likely cross him off the lost. The wild card is going to be Mecole Hardman who has seen increased snaps over the past two weeks and even found the end zone in Week 3.

The lone benefit for the Patriots receivers tonight is that the team figures to be down two scores for most of this one and the team will have to throw the football. Defensively the Chiefs have been solid this season so it’s going to be interesting to see exactly what type of production we can count on here. Julian Edelman and N’Keal Harry are the obvious choices here with Damiere Byrd being worth a dart throw.

Can’t really blame Matt Ryan for the Falcons implosions on the year as he has completed 62.5-percent of his passes for 961 yards with seven touchdowns and two interceptions. He has only had a healthy Julio Jones for one of these games and against the Bears not only did he not have Jones but Russell Gage also was injured. His connection with Calvin Ridley has been great for fantasy owners but outside of that he hasn’t had much help. The Packers defense has been good, allowing just 247 passing yards per game which ranks 15th in the league. With a healthy Julio Jones and Russell Gage returning to the lineup tonight I do expect a bounce back game here from Ryan.

For the Packers Aaron Rodgers is playing out of his mind through three games but the lack of receiver depth in Green Bay is going to make its impact as Davante Adams has again been ruled out and last week’s top receiver in Allen Lazard is on IR after having core surgery. This leaves Marquez Valdes-Scantling as the top receiver tonight. Now, the match up for Rodgers is elite as the Falcons defense has been awful this year but at some point the lack of talent could be too much for Rodgers to carry on his own.

The Falcons rushing attack has been uninspiring to say the least. Todd Gurley has been good, not great, and the backup situation with Brian Hill and Ito Smith leave much to be desired. Gurley is averaging 65 yards per game on the ground while averaging 4.0 yards per carry. In the passing game Gurley has just three catches on seven targets for a total of one yard…..yikes.

Aaron Jones is the show to watch tonight in my opinion. Through three games he has rushed for 303 yards and four scores while adding 10 catches on 18 targets for 95 yards and another touchdown. Those who expected touchdown regression from Jones in 2020 are off to a bad start as he finds himself on pace for MORE touchdowns this year than his 19 total scores of 2019.

Julio Jones and Calvin Ridley are the names to know in Atlanta. Jones is coming off a hamstring injury that effectively cost him the last two games even if he was active for Week 2. Now healthy we should see if he can repeat his Week 1 performance which saw him catch nine passes on 12 targets for 157 yards. Opposite of Jones is Ridley who many projected a breakout season and they have been correct so far as the third-year receiver has caught 21 passes on 35 targets for 349 yards and four touchdowns through three weeks. He has 100+ yards and 10+ targets in every game this season. Russell Gage and tight end Hayden Hurst are secondary options in the teams passing attack. Gage saw a whopping 21 targets through the first two games but was slowed by an injury in Week 3. Hurst had just one catch in Week 3 but it went for a score. Overall on the year Hurst has nine catches for 111 yards and two touchdowns.

Uhh, remember when everyone was upset the Packers did not draft any receivers or sign anyone to get Aaron Rodgers some help? Yeah, well, they really could use some extra receivers tonight. Davante Adams and Allen Lazard are both out which leaves Marquez Valdes-Scantling , Darrius Shepherd, Malik Taylor, Robert Tonyan and Jace Sternberger as his top targets....Do any of those names outside of MVS ring a bell? Probably not...now here is the kicker, the Falcons have given up a lot of yards through the air and a lot of points. Someone from this group is going to be in for a big night more than likely.