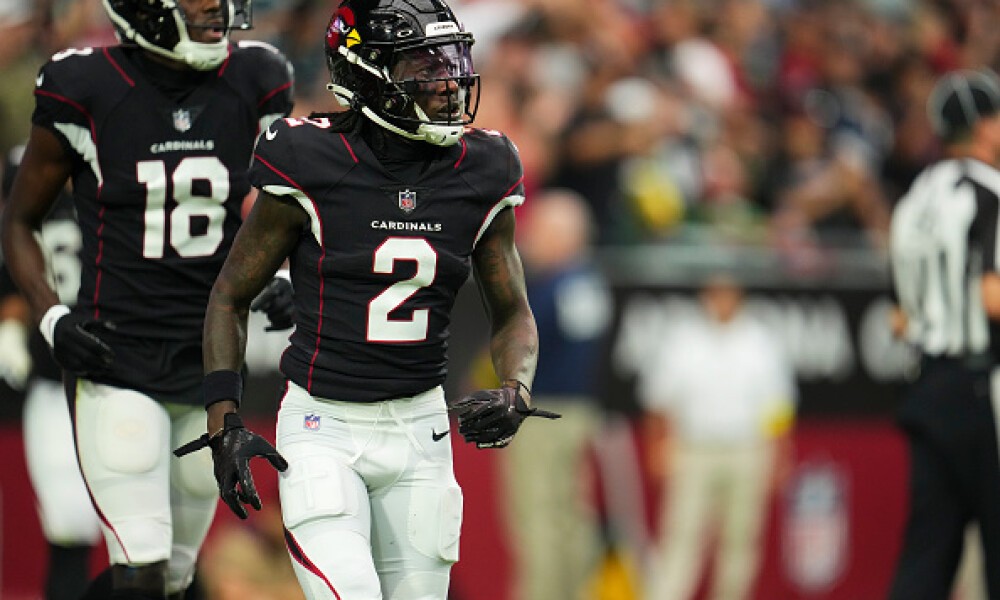 Week 7 in the NFL is a big week because we have three of the best teams in the league on bye weeks in the Buffalo Bills, Philadelphia Eagles, and Minnesota Vikings. That means some crucial players are not going to be in our lineups this week and we have a boatload of injuries in Week 6 as well, so our fantasy football rosters could really be reeling, especially if you roster Carson Wentz, Marquise Brown, and J.K. Dobbins. Let’s dive into the full injury report as we turn the page to NFL Week 7.

After Dallas’ loss to the Philadelphia Eagles, Dak Prescott was asked by ESPN’s Ed Werder about his Week 7 status and his quote was “Yeah, for sure. That’s my plan.” Prescott is scheduled to return in Week 7 and he’s thrown at practice for a week or so, so it shouldn’t surprise anyone hearing him say this. He’s been cleared to return to practice on Wednesday.

It was evident during their Week 6 Thursday night game that Carson Wentz was dealing with some type of hand injury and we’ve since found out it’s a fractured finger, which Ian Rapoport first reported. Wentz underwent successful surgery on Monday and will begin to rehab and is going to make a full recovery. Went is expected to miss four-to-six weeks of time, which in that case you wonder if he’ll even return as the starting quarterback if Washington continues to lose games.

This past Thursday, it seemed like Justin Fields was under pressure all night and was getting hit on every drop back. Well, because he was hit so much, he re-aggravated his left shoulder that has previously been dislocated. He doesn’t seem worried about the injury heading into the Bears Week 7 match-up against the Patriots. He does have extra time to recover considering they played on Thursday night and then Week 7 it’s a Monday night game.

After leaving the Steelers Week 6 game with a concussion, Kenny Pickett will enter Week 7 in concussion protocol and with how things have taken place lately, it’ll be hard for him to get out on the field considering how honed on on concussions the league has been. As we’ve seen just looking at trends at the position, basically everyone that has suffered a concussion has missed the following game; Tua Tagovailoa, Teddy Bridgewater, Chris Olave, and many more.

After leaving Carolina’s game in Week 6 against the Rams with a potential concussion, P.J. Walker ended up suffering a neck injury after clearing concussion protocol. If Walker can’t get back onto the field, who knows what’s going to happen at the quarterback spot for Carolina. Baker Mayfield is also hurt and Jacob Eason has thrown 10 passes since being drafted in the fourth round of the 2020 NFL draft.

It was very unfortunate to see Skylar Thompson’s first career start end the way it did as he left with a finger injury and did not return. It looked like he was available to return in an emergency because he returned to the sideline after his trip to the locker room and had his helmet on, but the Dolphins turned to Teddy Bridgewater. With Tua Tagovailoa expected to return in Week 7, Thompson will revert back to the Dolphins third QB for the remainder of the year if he’s healthy.

Following the Broncos Week 6 loss to the Chargers head coach Nathaniel Hackett revealed that Wilson suffered a hamstring injury during the game. The injury was not severe enough to keep Wilson out of the game but this is yet another injury to monitor when it comes to the Broncos QB.

After practicing on a limited basis to end the last week, it felt like Jonathan Taylor was trending towards playing until he wasn’t and was ultimately ruled out. Because he practiced last week there’s optimism at this point that he’ll suit up in Week 7. If he can’t, a combination of Deon Jackson, Nyheim Hines, and Phillip Lindsay could be used, barring the first two listed are healthy enough to go to.

There was nothing really reported during Sunday’s game about why Kenyan Drake emerged as the Ravens RB1 and J.K. Dobbins didn’t play in the second half but head coach John Harbaugh said “his knee tightened up. It just didn’t respond, probably to the turf maybe, I don’t know.” That sounds horrible considering Dobbins’ tore his ACL last season. This is a monitor we must watch moving forward.

The Cardinals, coming off a loss against Seattle, are playing Week 7 on a short week as they take on the New Orleans Saints on Thursday. James Conner has been dealing with a ribs injury and wasn’t able to practice or play last week. He started Week 7 off with a DNP on the Cardinals estimated practice report, so not a great start to the week. Head Coach Kliff Kingsbury has deemed Conner “day-to-day.”

It’s a little surprising to see Eno Benjamin pop up on the injury report after handling 87% of the snaps for Arizona running backs, but maybe it’s a workload-related foot injury. All that being said, he was estimated as limited and if he’s active, he could handle the lion's share of the opportunities. James Conner is listed as day-to-day and Darrel Williams is doubtful to play for Week 7.

After the initial report that Damien Harris would miss multiple games, it was surprising to see how active he was throughout the week. He practiced in a limited capacity on Thursday and Friday and even worked out before the game with the hope that his hamstring would feel good enough to give it a go. This is a good sign, even though he didn’t play, that he could be back sooner rather than later.

After a dominant three quarters of play on Sunday, Deon Jackson left the game and did not return due to a quad injury. The Colts went on and won their game without the top three running backs on their depth chart. Jackson tweeted out after the game that he was fine and if Jonathan Taylor and Nyheim Hines continue to miss time, Jackson could continue to be a workhorse for the Colts as long as he himself gets through this quad issue.

Initial reports from ESPN’s Adam Schefter were that Marquise Brown’s foot injury was potentially season-ending, but since then NFL Network’s Ian Rapoport said the small fracture in his foot will keep him out for just six weeks. He’s getting a second opinion on it, but as of now, that’s the thought and why the Cardinals went out and traded for Robbie Anderson.

We haven’t seen the oft-injured Michael Thomas since Week 3 and it doesn’t look like his return in coming in Week 7. He was a DNP on the Saints estimated practice report and with a Thursday night game in the cards for New Orleans, this will give him three extra days to return for the teams Week 8 game.

The loss of Keenan Allen continues to rear it’s ugly head week in, week out, and the Chargers were able to squeak out a victory in Week 6 without him, but they need him back. He was inactive in Week 6 for the fifth straight game, but the Chargers expect him to be ready for Week 7. We’ll see how this week of practice goes.

Foot injury is what we kept hearing, but nothing specific about the injury. Ravens head coach John Harbaugh claimed it was a foot sprain on Monday and “he’s close” to returning to action. The Ravens have lacked the big play ability the last two weeks without him. It sounds like we’ll know more about Bateman come Thursday.

Randall Cobb was very emotional after leaving Sunday’s game because he thought he was being carted off with a broken ankle. Turns out it’s not broken, but he will miss some time. Green Bay said it’s not going to be a one week injury and it’s not season-ending.

Green Bay needs good news at the wide receiver position, especially with Randall Cobb going down, and it sounds like they’re getting it as Sammy Watkins could be coming off IR in Week 7. He was seen running routes before the Packers Week 6 match-up against the Jets, which is a great sign for Watkins’ status moving forward. He was moving well.

It seems like Jarvis Landry should not have pushed his ankle in Week 4, doesn’t it? He’s been inactive in the two games since and the Saints have all but ruled him out in Week 7 as well. In the Saints estimated practice on Monday he was a DNP and hasn’t practiced since Week 4. The Saints play on Thursday.

After missing each of the last couple of games, Panthers head coach Steve Wilks said Laviska Shenault should be back this week, which is perfect timing considering the Panthers just dealt Robbie Anderson to Arizona. We’ll see if it’s coach speak or if Shenault does actually return.

It didn’t take long for Kendrick Bourne to come down with an injury in the Patriots Week 6 game as he left in the first quarter due to a toe injury and didn’t return. In his absence Tyquan Thornton came on and scored two touchdowns. We will have to see how serious this injury is, but not returning for the final three quarters doesn’t bode well for Bourne.

On a day we could have potentially seen Jamal Agnew extended due to the Marvin Jones absence, he was only able to play five snaps before exiting the game with a knee strain. He’s listed as day-to-day, according to head coach Doug Pederson, so it sounds as if Agnew dodged a bullet.

It was VERY strange to see Dalton Schultz inactive on Sunday night after not being listed on the final injury report, but a report came out on Monday from Cowboys EVP, Stephen Jones, that Schultz tweaked his knee during Saturday’s “ramp-up” practice. This is the third time this year he’s injured the same knee.

We’ll learn more how Pat Freiermuth is responding in the concussion protocol this week, but nobody has returned the next game after returning from a concussion since the league implemented it’s new rules.

We haven’t seen much of Logan Thomas over the last two weeks, but the short week did not help his case to get back on the field. Given Thomas’ injury history, the Commanders had no reason to rush him back on the short week. We’ll see how the practice reports unfold when Washington takes the field.

It was extremely concerning to see Adam Trautman just fall to the ground on a non-contact injury in which he was simply motioning from one side of the formation to another. The Saints are saying they dodged a bullet and his ankle injury is not viewed as serious. That said, he’s not going to play on the Saints short week, playing Thursday night against the Cardinals.

This was not a good looking injury for Cameron Brate as that’s the second time he’s suffered an injury near his head over the last two games he’s played. This time it’s a neck injury, but he was stretchered off the field. He’s in good spirits and was released from the hospital, but the head injuries are racking up for Brate this year. Scary stuff. Tampa Bay could be without him for some time.