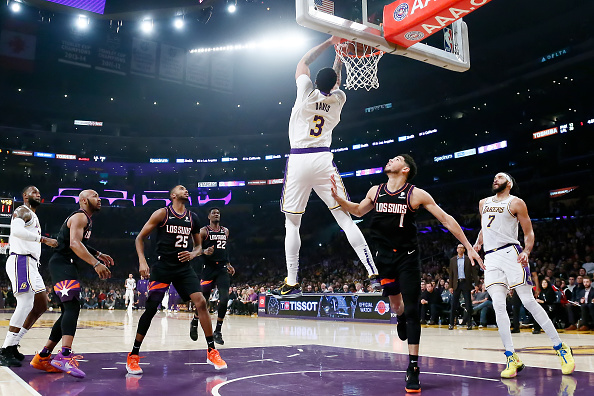 Devin Booker and the Suns take on Anthony Davis and the Lakers in a late-night showdown!

Davis’ price hasn’t changed since Friday night, and all he did then was go nuts. It was perhaps the best game of the season from Davis who made 12 of 23 shots form the field while also adding 10 points from the free throw line to give him a double-double with 36 points and 12 rebounds to go along with five assists. Nothing should change from then for Davis as James and Schroder are still out and the Lakers are likely going to be without Kuzma so the offense will rely on him and he certainly appears to be up to the task as well. It’s costly, but for me this is the way to go tonight unless you are looking to throw a dart or be contrarian.

A large part of why Phoenix is favored tonight and, in the position, they are heading into the playoffs is due to Paul. Beyond the leadership provided, Paul has been a consistent producer averaging 16 points and nine assists per game and generally staying pretty close to those marks. There are some nights where he is more involved offensively than others, but there is some upside here.

Booker’s offensive upside can’t be matched tonight, but there is some risk and volatility as well. After hitting the 30-point mark for four straight games and six of seven, Booker dropped down to 16 points in his last game on just three of 12 shooting. We could write that up as an aberration, but we have seen similar performances from him thus far this season, and the majority of his volume comes from his scoring.

Could we just bottle up what we saw from Ayton on Friday? We know it’s in there, and he showed it off on Friday, now if only he could do it with more consistency. Too often, the center puts up a boring, but consistent, stat line of about 30 DFS points, but on Friday, Ayton went off for 26 points and 15 rebounds against the Knicks. Let’s see if he can keep it going tonight.

A solid contributor all around, Bridges has picked things up offensively averaging 18.2 points per game in his last five, while chipping in a few rebounds. It’s nothing that especially stands out, but there is occasional upside, and given the options that dependability has real value tonight.

Caruso hasn’t missed a game despite the injury designation, so I’m operating under the assumption that he will remain in the starting lineup tonight. In fact, he played 35 minutes on Friday against Portland and showed off some offensive ability with 18 points while also grabbing six rebounds. Caruso picked up seven assists in his previous game, so it would be nice if he could combine the two efforts, but there’s no reason why he shouldn’t wind up with between 20 and 30 DFS points tonight.

After missing the last two games, Horton-Tucker is slated to return tonight, and quite possibly be in the starting lineup with Kuzma out. That means there will be some offensive opportunity available for the swingman who did average 12 points and four rebounds in his last two games.

Craig is back in the starting lineup tonight after getting 29 minutes of playing time on Friday. He took 10 shots, but made just three of them, although he did grab six rebounds which left him with 19.25 DK points. A few games ago, Craig did have 40 DK points so the upside is there, but in this case, we are chasing the minutes more than anything else.

Payne is averaging 20 minutes and 22 DK points per game over his last five and he is coming off a 15-point performance on Friday against the Knicks as one of the first options off the bench for Phoenix. He fits nicely in at the back end of your roster tonight.