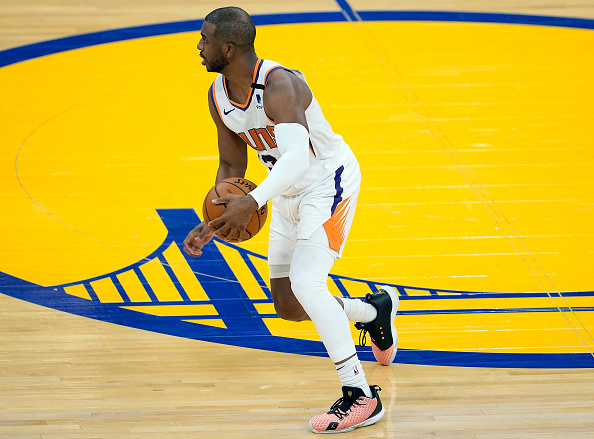 Playoff LBJ was activated against the Warriors as he had triple-vision, literally and figuratively as he dropped a triple-double. He played against PHX once this year and he scored 38 actual and 59 DKP. It’s a tough match-up and will see a lot of Jae Crowder and Mikal Bridges , two elite defenders, but that won’t stop him if he’s playing the way he did against GSW.

Davis was off to a SLOW start in the Warriors game but when they shifted him to center, taking Andre Drummond off the floor, Davis was really able to get going and ended up with 25 & 10. He TORCHED PHX the last time they met, putting up 42 actual and 77 DKP. Jae Crowder is good, but too small to guard Davis. If they shift him to center, Deandre Ayton stands no chance.

I love CP3 on today’s slate. Dennis Schroder is an awful defender and Chris Paul is a great postseason player, whether or not he’s won a championship, that’s besides the point. The Lakers, as a team, rank 17th in DvP against point-guards. In 19 career playoff series, Paul has averaged 20.9 points, 8.3 assists and 5.2 rebounds per game.

I mean, we know he can score with the best of them. When he’s hot, he’s sometimes unstoppable. He will have a tough match-up against the likes of KCP, Wes Matthews and possibly even LeBron James .

Bridges is going to play 40 minutes here. The Suns run him out for as many minutes he can handle and he’s going to be guarding LeBron James and likely Anthony Davis at times. He’s not going to guard anybody else. Bridges, when his shot is falling, has massive upside because we know the defensive metrics will be there.

Over KCP’s last four games, he averaged 30 minutes and 22.6 DKP/game. He’s been a fairly solid contributor lately putting up 20+ FP in seven straight and in nine-of-10. He’s sometimes the fourth, even fifth offensive option, but he can be a lethal shooter and provides really solid defense.

The Lakers seem content with using Alex Caruso as their primary bench player. He’s a great defender and contributes in a multitude of categories. He played 30 minutes against the Warriors, putting up 28 DKP. He’s put up 21+ DKP in six-of-seven games. Nice value.

I’m not sure we see a TON of Saric here, but he’s a FP/min gawd. He’s been a regular in this rotation, so he’ll likely see minutes backing up both Deandre Ayton and Jae Crowder . If Saric sees 20 minutes, at this price, on this one game slate, he’s worth it and more.