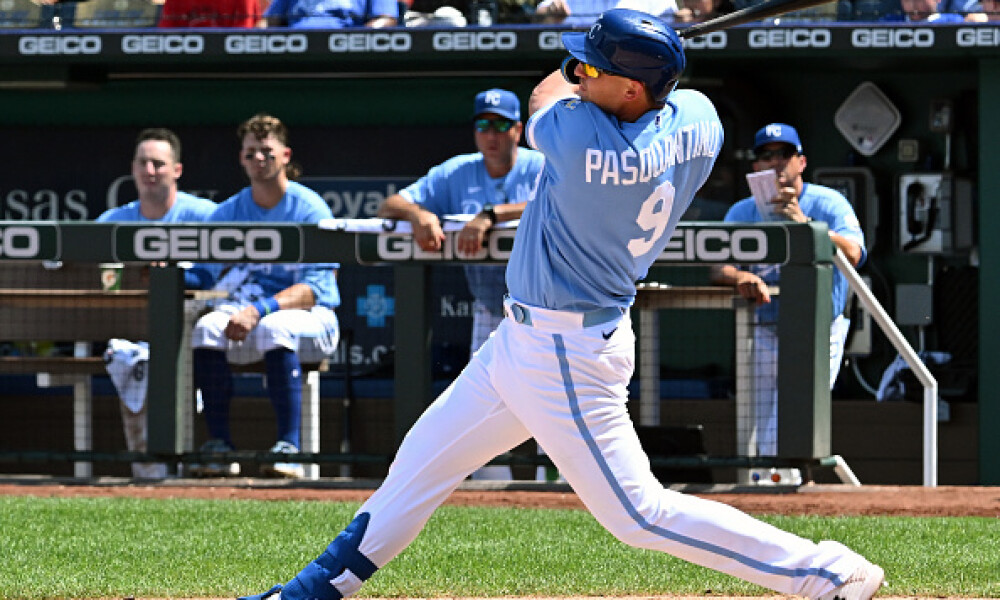 We have 13 games on the MLB DFS main slate today to build daily fantasy baseball lineups on DraftKings, FanDuel, and Yahoo Fantasy. Amidst star power on the mound with the likes of Justin Verlander, Dylan Cease, and Robbie Ray, there is plenty of value to be found on the slate for your MLB daily fantasy lineups. Getting quality returns on investment leads to being in the green, and I’ve uncovered some hidden gems to help round out your MLB DFS lineups tonight. In particular, two MLB top prospects really stood out and the price points are incredibly affordable. Those two MLB top prospects are Vinnie Pasquantino of the Kansas City Royals and Vaughn Grissom of the Atlanta Braves could be MLB DFS top plays tonight. For even more daily fantasy baseball content to help your MLB DFS lineups, check out our MLB daily projections, the MLB DFS Quick Pitch podcast, and MLB weather report for all things MLB daily fantasy. Plus, keep an eye on confirmed MLB lineups and today's MLB Vegas Odds. Now, here are my favorite MLB DFS top picks and value plays for the main slate on Tuesday, August 16.

Over the last month versus right-handed pitchers, the Detroit Tigers have the league’s highest strikeout rate at 29.7%. The next-closest is Boston at 26%. Yes, that’s nearly a four-percentage point gap between the Tigers and the next-worst team! Furthermore, the Tigers are hitting just .208 with a .095 ISO in the aforementioned time period, and the team’s 60 wRC+ is by far the lowest in the league. Meanwhile, Plesac is coming off a seven-strikeout performance in his last outing against the Tigers and he has 10 strikeouts in 12.1 innings against Detroit this season. The Cleveland Guardians righty also has a 3.49 ERA at home this year. While there are some weather concerns with this contest, Plesac is in a great spot to produce a quality return on investment.

I mentioned it above, but other than Detroit, Boston has been the MLB's most strikeout-prone team against right-handed pitchers. This play is not for the faint of heart, though, as Keller is prone to a blow up on a moment’s notice. To his credit, however, he has been solid of late. The Pittsburgh Pirates' right-hander has allowed three or fewer earned runs in six straight starts, posting a 2.23 ERA and 0.50 HR/9 in that stretch. Still, we’ll need the Red Sox to play up his strikeout numbers tonight. Keller has just a 6.19 K/9 in this recent six-start stretch and he has five or more strikeouts in just three of the six contests. For Keller to give us what we need at this price point, we’ll need five or six solid innings and ideally a strikeout per inning at least.

What does Pasquantino have to do to get his price tag bumped up? Back on July 31st, the Kansas City Royals rookie was priced at $2,100 on DraftKings when he was hitting .225 with an 88 wRC+ coming into that game. Well, fast forward to today, where he’s priced at the same $2,100 price tag, but he’s hitting .354 with a 218 wRC+ over his last 13 games – not to mention five home runs and four doubles in that stretch. How does this make any sense? What am I missing here? I don’t know, but we’ll take the value and run with it! Pasquantino has an .802 OPS against righties this season, and he gets to face Sonny Gray, who has a 3.50 ERA and 1.33 WHIP at home – both of which are worse than his road numbers.

After being run out of Cleveland, Reyes has been quite good for the Chicago Cubs. In five games with the Cubs, Reyes is hitting .333 with a .619 slugging percentage, one home run, one triple, one double, four RBI, and one run scored. For Reyes’ career, he’s hit lefties at a .268 clip with an .821 OPS, and now he gets to face Patrick Corbin tonight. The Washington Nationals' southpaw has allowed a .328 average and .397 wOBA to right-handed hitters and in his home park, he’s served up a 5.17 ERA and 1.61 WHIP. This play may not be for the faint of heart, but we have to attack Corbin, given how putrid he’s been this season. GPP-only play here.

DeJong is too expensive on Yahoo, and maybe a tad high on DraftKings for the sake of the Value Vault. Still, he is hitting .385 with a .731 slugging percentage over his last seven games. DeJong is only hitting .192 on the season, but he’s hitting .280 with an .880 OPS against southpaws. Meanwhile, Colorado’s Kyle Freeland has allowed righties to hit .271 on the season. The Rockies lefty has a 6.00 ERA over his last seven starts and he’s allowed at least six hits in four of his last five road starts. Fire up DeJong tonight.

What is Yahoo doing? I like Grissom as much as the next guy, but he's sub-$3K on FanDuel and DraftKings while being Yahoo's highest-priced second baseman – and is in the same pricing tier as Paul Goldschmidt and Nolan Arenado. However, the Atlanta Braves' top prospect is incredibly affordable on the other sites and is hitting .429 with two home runs, eight runs scored, four RBI, and one stolen base through his first six big league games. Grissom has hit righties at a .385 clip this season and New York Mets starter Taijuan Walker was pummeled by this Braves team earlier this month. The higher in the lineup Grissom hits, the better, but he’s been so productive it’s hard to ignore him. That's especially true on DraftKings, where he is at minimum price. How does that happen – being the highest-priced player at the position on one site and minimum price on another?

I know I already mentioned Pasquantino at the first base position, but I’d be remiss to not include Walker here given his recent production and price points on FanDuel and Yahoo. Since returning from injury, Jakob Junis has a 7.16 ERA and .429 BABIP across five appearances (four starts). He’s been unlucky, sure, but being unlucky isn’t going to get better when you have to face Christian Walker lately. In August, Walker is hitting .360 with a 1.191 OPS, and when you look at his numbers specifically against righties, he’s hitting .375 with five home runs, 16 RBI and a 1.238 OPS. For the season as a whole, his numbers may look better against lefties, but he’s hitting everything of late, and warrants consideration this evening.