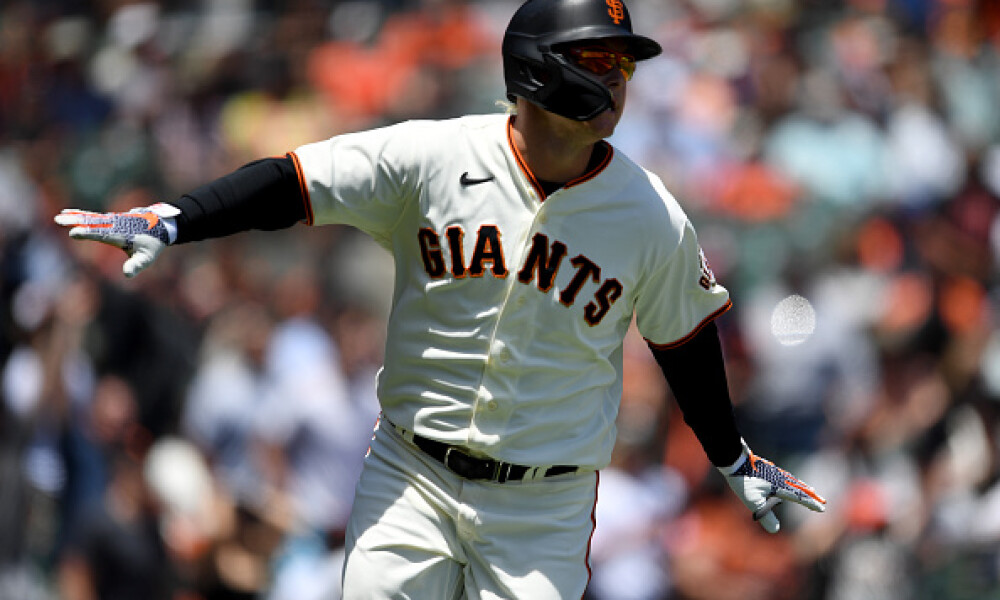 You already know what Saturdays mean here at Fantasy Alarm! It’s time to take a look at some current hit streaks across Major League Baseball, as well as some hot and cold hitters over the last week or so. This 2022 fantasy baseball season has been awesome thus far, and while the game features a wealth of superstars, we have free agent pickups in fantasy baseball like Luis Arraez and Harold Ramírez ranking in the top-five of batting average and expected batting average respectively. Los Angeles’ Trea Turner has the longest active hit streak at the moment, while prospects Bobby Witt Jr. and Julio Rodríguez are gaining traction at the game’s highest levels. Without further ado, let’s dive into some of the stat leaders in Major League Baseball, and those that command attention in your fantasy baseball leagues.

He’s BAAACK! Over the last week, Joc Pederson is hitting .471 with a 1.806 OPS, thanks largely to four home runs, including three in one contest. He’s struck out just once in his last 17 at-bats, and during this stretch, he has the fourth-highest average exit velocity. After a rough start to the month of May — hitting just .051 through his first 46 May plate appearances — he’s turned it around of late and a dearth of strikeouts will certainly help. For fantasy purposes, temper expectations as he won’t keep this up and he doesn’t face lefties, but on heavy right-handed weeks, Pederson is a near must-start.

We’ve seen Luis Arraez do it before, and he’s doing it again, hitting .481 over his last 27 at-bats. Outside of that, he hasn’t done much for fantasy managers, but if your fantasy baseball team is hurting in batting average, look to see if Arraez is still hanging around in free agency. In deeper formats, he’s likely not available, but those in shallower leagues could stand to benefit from Arraez’s multi-positional eligibility and ability to hit for a high batting average.

Coming into the year, Nathaniel Lowe was a guy I loved in drafts. A rough month of May had hurt him, but things look like they are turning around, making him a must-add if available. He’s hitting .375 over the last week with two home runs, five RBI, four runs scored and one stolen base. He’s hit safely in seven of his last eight, and take a look at his rolling stats separated into increments of 25 batted balls, and tell me you don’t like what you’re seeing coming out of this slump: 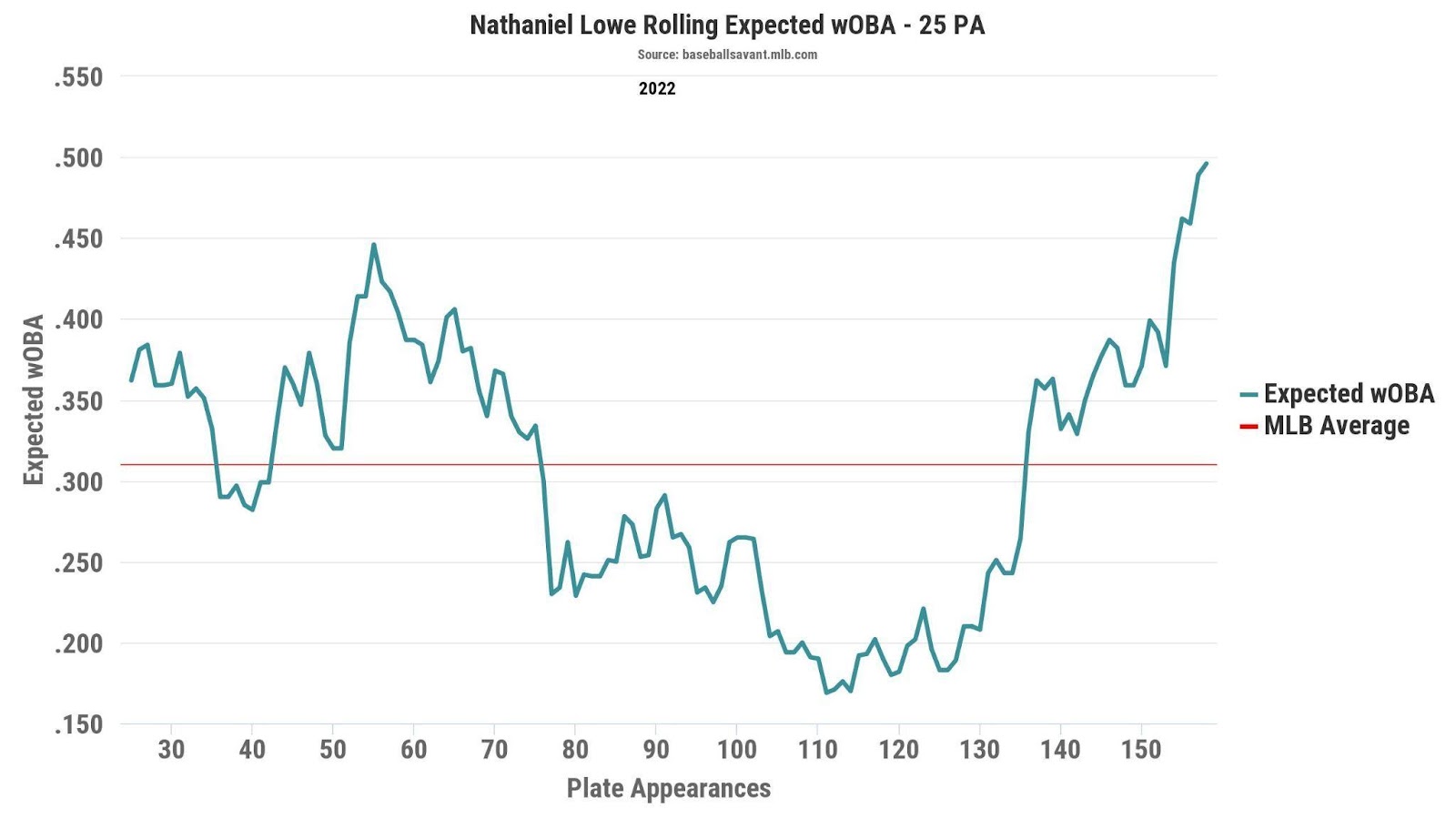 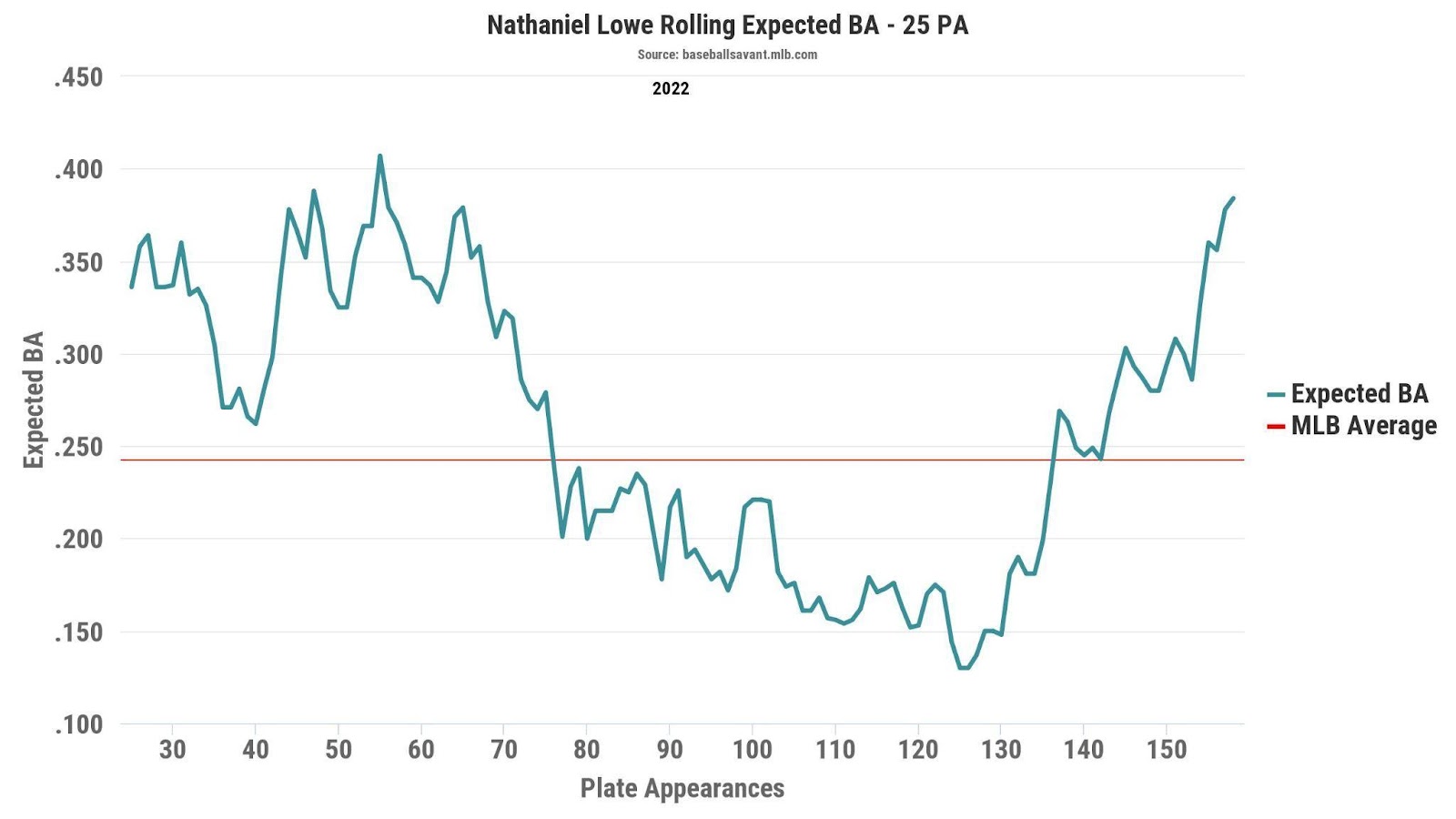 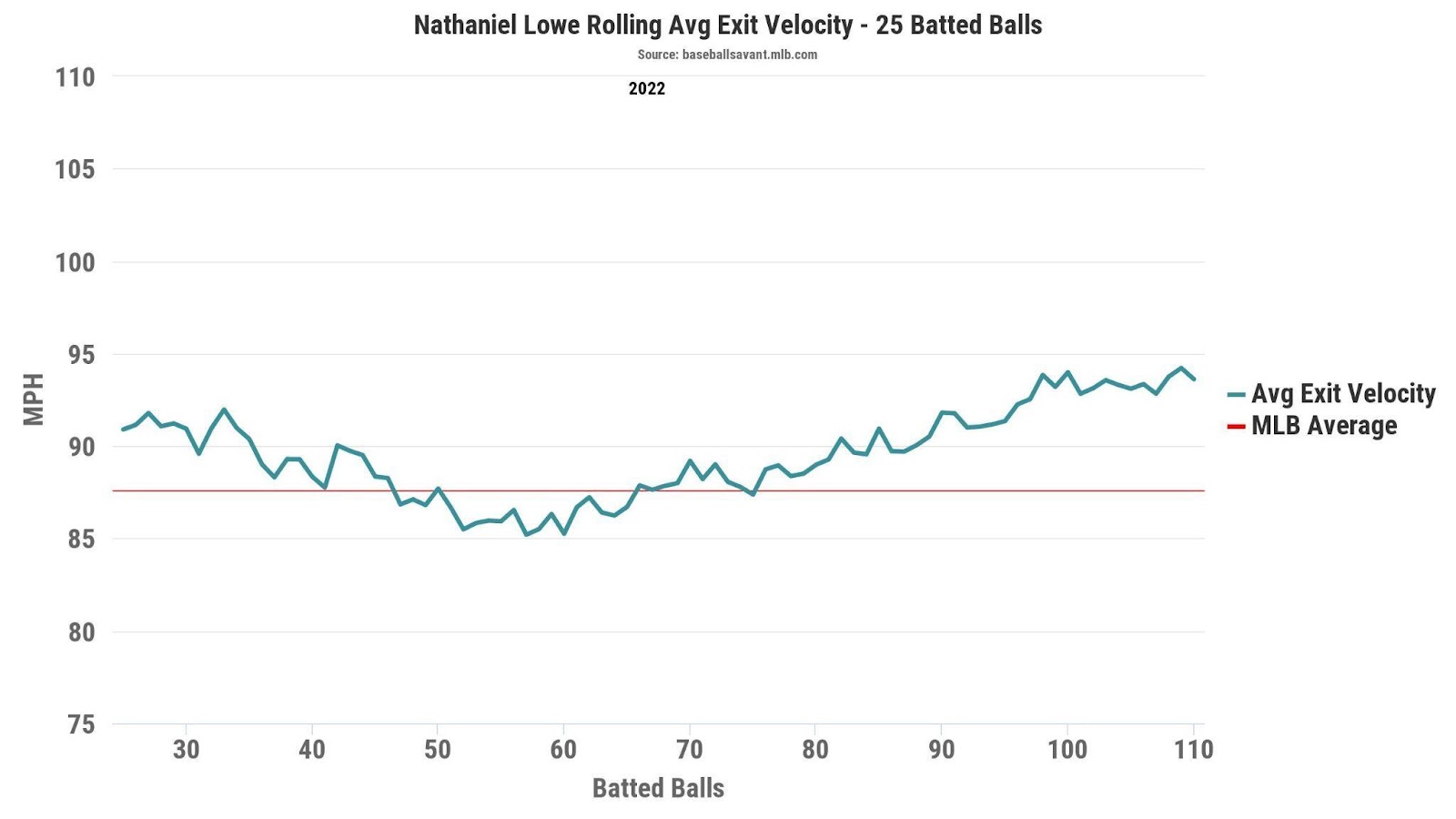 Juan Soto is mired in a bit of a slump, hitting just .125 over the last week, .176 over his last 15 games and just .224 for the month of May. He’s not striking out a ton, and he’s putting the ball in play, but a .221 BABIP in the month of May isn’t going to do you any favors. He is being shifted more this year than in years past, which is something to note, but most of his batted ball metrics and peripherals are in line overall with years past. His average exit velocity is down a bit, sure, but look where it’s at of late compared to years past, and you’ll see that this is merely an outlier. 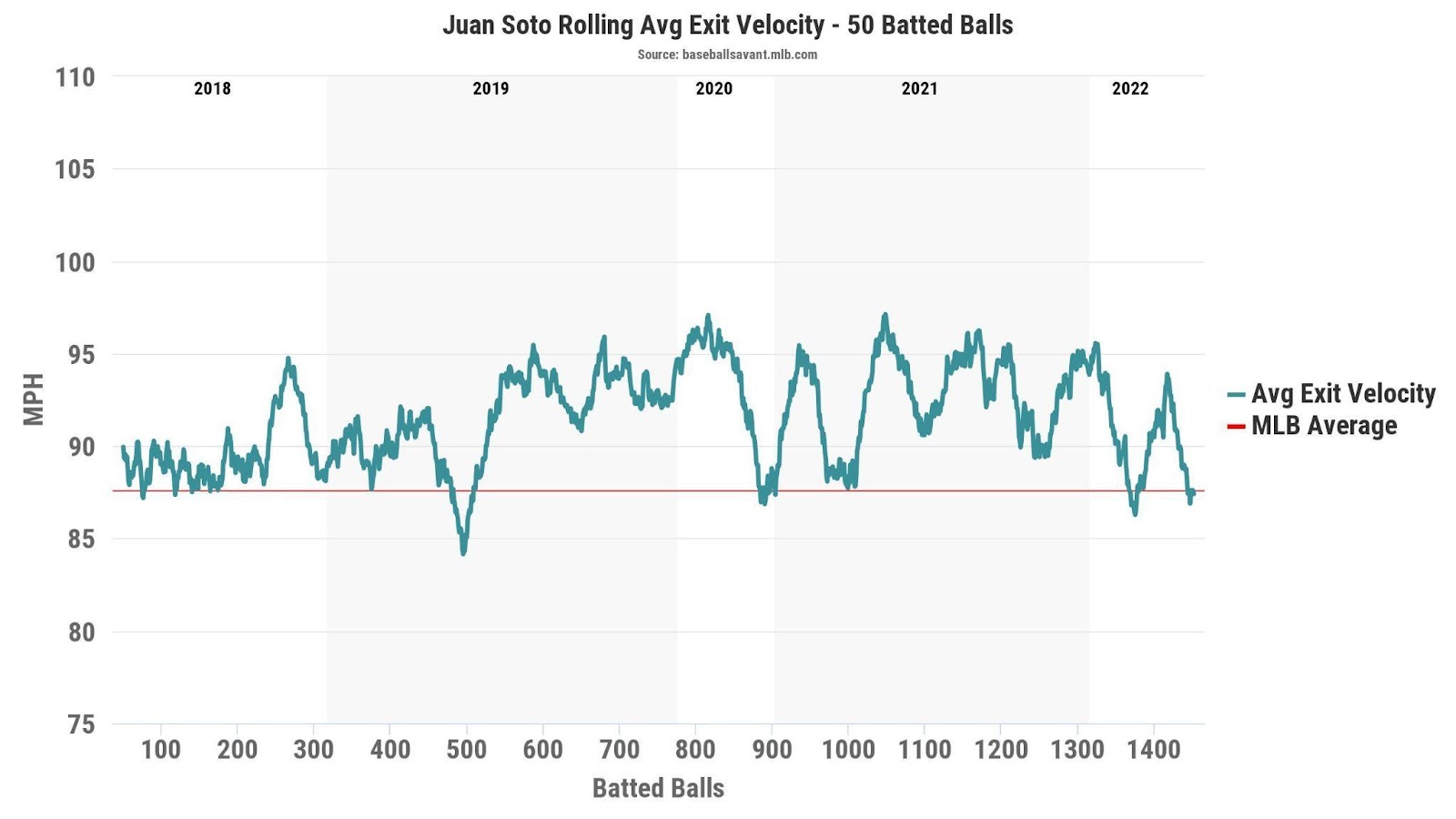 Eli White can run, sure, but this isn’t Banana Ball where you can steal first base. He has just one hit in his last 17 at-bats with a whopping 10 strikeouts, and through 28 games this year, he has a massive 38.5 percent strikeout rate! If he gets on base, fine, he can help your fantasy team as he is a perfect 8-for-8 in stolen base attempts on the year, but for the season, he has just a .282 OBP, and over the last week, that OBP is at .111. He hasn’t stolen a base since May 16th, folks.

Another Texas Ranger finds themselves in the wrong part of this article. Of qualified hitters in Major League Baseball, no one has a lower OBP over the last seven days than Corey Seager. His .115 OBP is magnified by going just 3-for-26 during this cold stretch without a single walk. During this rough seven game stretch, take a look at some of his plate discipline metrics for the year compared to during this slump:

Things should turn around for Seager, but he appears to be pressing a little bit to get out of this slump.