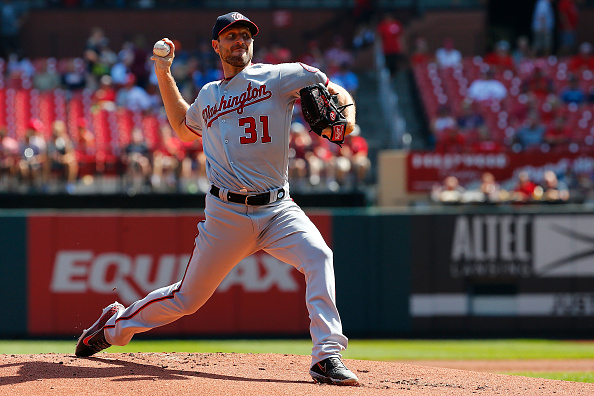 As the season heads into its final week, it would be great to be able to trust the rotation schedules, but alas, no such luck. While the bottom two starting pitchers in the top tier are scheduled to take the mound twice, even if both Cole and Scherzer open their second contests, do not expect them to pitch deep into those games. Such is tune up baseball, as the playoff approach.

It has been an absolute joy to profile two-start pitchers again this season, and this writer is looking forward to 2020 and the dual-appearance discussion to begin again…already. Keep reading our other fantasy output as those other sports continue or begin.

As noted above, Cole and Scherzer are longshots to pitch two six inning or more starts this coming week. The other four are better bets to go long enough to rack up a victory or two for their owners, and of course, anytime Cole or Mad Max take the ball, you need to plug them into your fantasy lineups. As was the case last week, though, the pickings at the top of the food chain are extremely limited this week.

Matz is coming off a tough outing where he gave up seven earned runs over just three complete innings, but it happened at Coors Field and that can happen to anyone, right? Prior to that, he compiled a useful stat line for fantasy purposes: 2.39 ERA, 1.08 WHIP, 8.8 K/9, 2.2 BB/9, 0.6 HR/9 over 60.1 IP since July 21st. He gets to take on the Marlins in his first Week Twenty-Seven start, and then the Braves who may not be playing for anything at the end of the scoring period, both home contests where he has excelled this season.

Civale has six QS in his nine starts as a major leaguer in his rookie campaign, and has yet to yield more than two earned runs any of those contests. He has two road games, but has not truly struggled no matter the venue where he has plied his trade in the big leagues. With a set of stellar ratios (1.82 ERA and 0.99 WHIP through 54.1 IP), he is truly a late-season pitching star for those fantasy players who had the vision to snag him off the free agent market.

Wainwright had not shown much to commend him for fantasy purposes over the past three seasons, but has leapt back into the spotlight with four consecutive excellent starts in the month of September: 4-0, 0.33 ERA, 0.93 WHIP, 0 HR. Not a bad time to crank up the pitching production, heading into the playoffs, eh?

Snell’s first outing since returning to action after being sidelined due to his elbow issues was limited to two innings, albeit perfect frames. He is scheduled to toe the rubber on Monday against the visiting BoSox then head off north of the border to take on the Blue Jays and former Red Sox hurler, Clay Matthews. He is still a great source of Ks, assuming he is fully recovered and with the Rays still having an outside shot at the playoffs, they will be hoping and wishing for the 26-year old Cy Young recipient to give them a push forward.

Samardzija bounced back after a trio of less than stellar efforts, holding the host Red Sox to just a single earned run (on a homer) in Boston. He does offer a tempting 3.64 ERA and 1.11 WHIP despite the recent struggles on the hill, and is pitching at home for both his scheduled Week Twenty-Seven trips to the bump.

Smith, on the other hand, is away from Miami for both his coming appearances, which diminishes his luster somewhat, as he has been much more effective at Marlins Park this season. He is an excellent source of Ks (10.2 K/9 through 144.1 IP), although both his upcoming opponents are middle of the pack in terms of missing pitches.

Young has to be impressing the Diamondback management team, as the rookie southpaw has been on a tear of late, posting excellent ratios over his last four outings: 2.30 ERA, 1.21 WHIP, 9.2 K/9 and going 3-1 over that stretch of contests. He is pitching at home for both his scheduled starts, which based on his home/road splits is something of a mild concern, but he handled both the Rockies and Dodgers well in recent outings at Chase Field.

Alcantara has two road games on the calendar, but has been a better road arm this season for his fantasy owners. He will have to rely on his tendency to keep the ball in the yard (1.0 HR/9 over 184.1 IP in 2019), which is often a difficult feat in Philadelphia, where he winds up the final week of the season, so think upon using him for both his starts if you absolutely need the victory or ratios to prevail in your league.

Eflin has his moments, such as holding the Braves to a single tally over seven innings in his last start, but also has the propensity to get pulled early when he struggles. He is nothing more than an average strikeout producer (7.2 K/9 over 150.2 IP) but does demonstrate good control (2.5 BB/9 through 30 appearances, 26 starts). A 4.00 ERA is not eyepopping, but can be useful in the right circumstances.

Anderson has collected three QS since the beginning of August, and could have doubled that figure had he been able to go another frame in three of those contests (assuming he did not get too generous in allowing opposition hitters to circle the bases, it being understood). He has been more of a road warrior this season, so two road games play into his strength, and both matchups are favorable against the bottom-dwelling teams in the division.

Stripling is scheduled as of now to start two contests in Week Twenty-Seven, but will move to the bullpen once the playoffs start and the Dodgers only need three SPs in the postseason. For fantasy purposes, though, enjoy his dominance and command on the mound this final week of the regular season (8.8 K/9, 2.0 BB/9 through 86.2 IP).

Norris has struggled in his career with the Tigers, battling injury and ineffectiveness, and the team is taking a kid glove approach in his return to action, limiting his innings drastically. He has been limited to just three innings in his eight recent starts beginning with August 11 against the Royals. Obviously, do not expect to tally any victories or even QS when he gets the nod as the Tiger SP, but he can provide good ratios despite the limited time toeing the rubber: 3.75 ERA, 1.04 WHIP and 8.2 K/9 (although do not count on those Ks to be anything more than relief pitcher totals).

Lester has struggled on the road in 2019, and with two away games on the slate, he drops in value even with a couple of starts in line. He is still a good source of whiffs, no matter the venue (8.7 K/9 through 165.2 IP), although neither opponent is a great matchup for K production.

Syndergaard drops to the bottom of the middle tier based on his recent travails on the mound: 7.52 ERA, 1.52 WHIP over his last five starts. Granted, he is striking out better than a batter per inning despite the struggles (10.5 K/9 over those 25.2 IP) and is still exhibiting great control as well (2.1 BB/9). Add in his lack of success at Citi Field, and even with the Marlins on deck Tuesday, it is difficult to fully trust Thor right now.

In the event you are competing to finish atop your league, do not be swayed by the dual start nature of any of these SPs. Now is not the time to take a huge risk on a shaky starting pitcher, just because of the vagaries of the calendar. Stick with the two-start options in the middle tier if you are seeking innings as the season wraps, and avoid damaging your ratio stats with any of the bottom group immediately above.