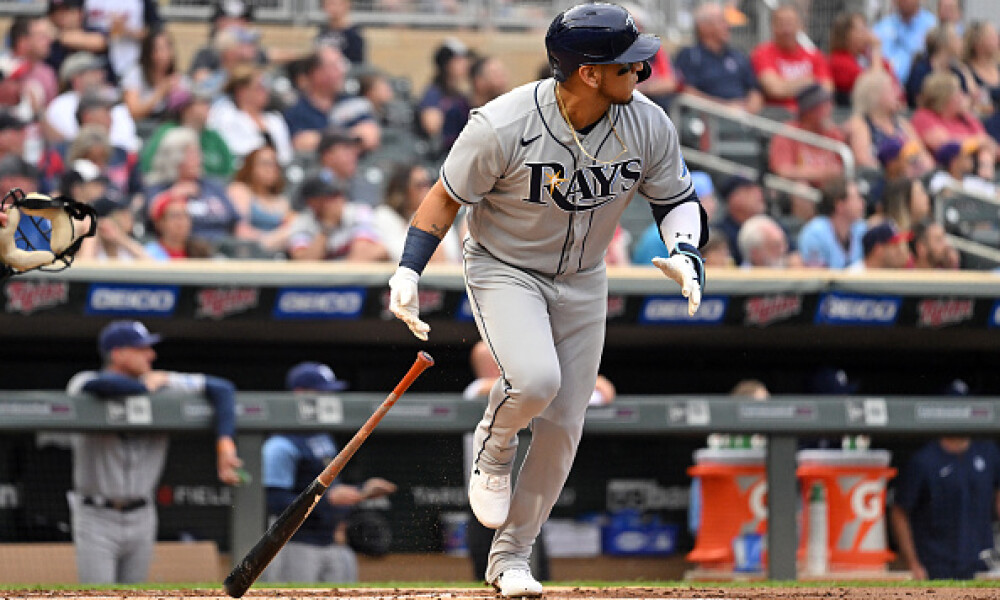 Tuesday’s Major League Baseball action was highlighted by players I guarantee you didn’t draft on your fantasy teams back in the offseason. No matter how different your own ranks compared to ADP, players like Isaac Paredes, Tony Gonsolin, and Martín Pérez were likely not on your radar. We also had some usual suspects like Pete Alonso and Kyle Tucker go off in a head-to-head matchup. Nolan Gorman went deep twice. But we unfortunately also saw injuries to fantasy mainstays George Springer, Salvador Perez, and Dany Jiménez as well.

When you saw that Isaac Paredes hit three home runs on Tuesday, I know you thought one thing. “Does he even have three home runs in his entire career?” The answer is, yes. Barely. Paredes just bumped his career home run total from seven to 10 in one massive game on Tuesday and did something no Rays player had ever done before.

While we can never expect three home runs again, Paredes does have a little bit of pop and should have ample playing time with Manuel Margot and Kevin Keirmaier now hurt. He might be worth a look in very deep and AL-only leagues.

Martín Pérez and Tony Gonsolin’s Deal With the Devil Extended

Someday, Martín Pérez will have an ERA above 2.00 and someday, Tony Gonsolin will lose a game. But Tuesday was not that day as both were electric again in their respective starts.

Perez shut down a potent Philadelphia Phillies offense, allowing only three hits to the top five batters in the lineup. He continues to somehow shut down opponents, which has led to his 1.96 ERA, bested only bey Shane McClanahan in the American League.

Tony Gonsolin ran his record to 9-0 with a 1.58 ERA after allowing just two runs in a win against the Reds. Both of those marks are best in the National League and it may be time to start taking the Cy Young case for Gonsolin seriously. Books still only have him around +2000 to win.

Shohei Ohtani Drives In Everyone

Shohei Ohtani had a pair of three-run jacks, a pair of sacrifice flies, and three total hits en route to eight RBI against the Kansas City Royals on Tuesday. This was a game Ohtani desperately needed as he had not hit a homer or driven in a run in 10 days.

The Angels may have still lost and have fallen out of contention in the AL West, but Ohtani remains perhaps the most undeniably entertaining player in Major League Baseball. Those who have him in leagues where he can be either hitter or pitcher simply are in possession of a cheat code.

Just when fantasy managers were beginning to wonder where the power had gone for Nolan Gorman, he gifts us with a two home-run night against the Milwaukee Brewers on Tuesday. It was a welcome sight for those who roster Gorman as he only had two extra-base hits since June 3rd before the power outburst.

Granted, this was against Chi Chi González, who hasn’t had an effective outing since the Obama administration, but the two homers, four hits, and four RBI will hopefully jump-start what had become a prolonged slump for the talented rookie.

On a night when the New York Mets otherwise looked putrid, Alonso still smashed. He went 3-for-3 with a home run, an RBI, and a walk against the Houston Astros. He is up to 20 home runs on the season, which puts him in pretty exclusive company in 2022.

While Oneil Cruz is getting the headlines the past couple days (another hit, walk, and stolen base tonight), Roansy Contreras is here to remind us that Cruz is not the only Pittsburgh prospect who is seeing their stock on the rise.

Contreras shut down the Cubs except for a Patrick Wisdom home run, and now has a pristine 2.89 ERA. He needs to get the K/9 back up to the 10 level after the last couple of starts, but this looks like a useful fantasy asset no matter what kind of league you are in.

Dany Jiménez Lands on the IL

Athletics closer Dany Jiménez avoided structural damage, but still winds up on the IL with a shoulder injury. He had become a solid source of saves this year, but now the closer role will likely be spilt between A.J. Puk and Zach Jackson.

While we don’t know the extent of the injury at this point, George Springer left Tuesday’s game with an elbow injury of some kind. If he is to miss extended time, Cavan Biggio, who replaced Springer, would be in line for more secure playing time and would likely move up in the batting order.

In what is quickly becoming a lost season for Sal Perez after his monster 2021, the Royals’ catcher reaggravated his left thumb injury on Tuesday and was forced to leave the game in the third inning. He already missed a significant amount of time with the injury last month and it has certainly sapped his power this year after 48 homers last season. It’s worth running to your waiver wire today to see if MJ Melendez is still available in your league.