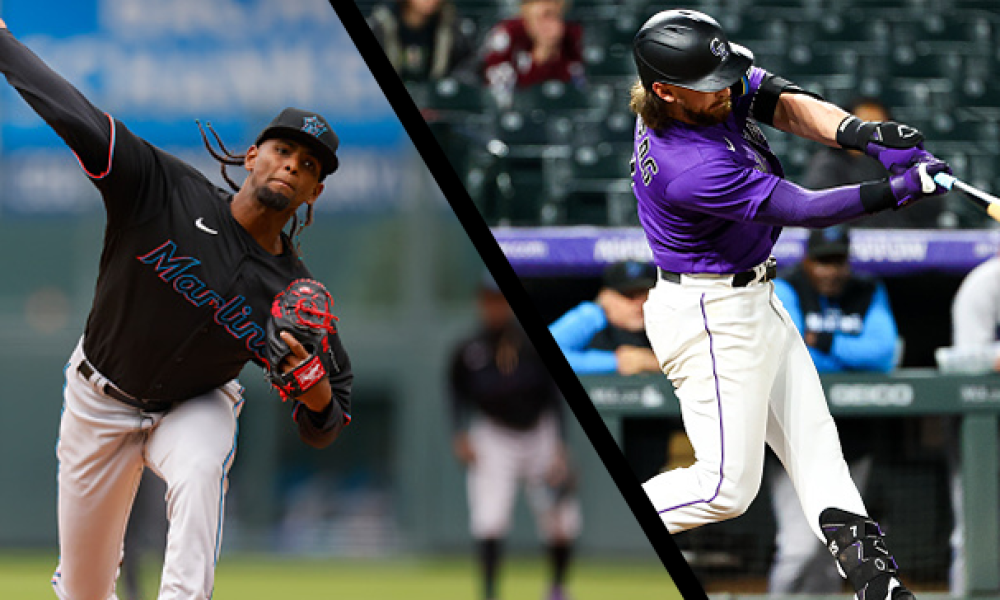 While Major League Baseball has a bevy of established veterans, there are numerous fantasy baseball rookies and top MLB prospects that are shining at the game’s highest level. Chicago Cubs’ Christopher Morel has been quite the fantasy baseball waiver wire pick up over the last couple of weeks, and Miami’s Edward Cabrera has a record-breaking changeup that made a strong case for another turn in the rotation. On the other hand, Marlins pitcher Trevor Rogers is trending towards being a fantasy baseball bust as his struggles have continued, Meanwhile, Baltimore’s top pitching prospect Grayson Rodriguez may see his MLB debut delayed due to a lat issue. Lastly, we’ll take a look at some of my MLB best bets and favorite player props for Thursday, all of which are over on DraftKings Sportsbook. Before setting your daily fantasy baseball lineups or making MLB bets today, be sure to check out the latest MLB weather report and MLB lineups page. Now let's review all of the MLB top performers, injuries to know, and everything in between for today's fantasy baseball daily round-up!

I wrote about Christopher Morel earlier this week in a fantasy baseball player spotlight highlighting his impressive start at the Major League level. He’s hitting .268 on the year with two home runs and six stolen bases. He’s moved his way to the top of the Chicago lineup, and injuries to Seiya Suzuki and Jonathan Villar solidify his role on this team for the foreseeable future. Fantasy baseball managers that do not play on Yahoo should be thrilled that second base eligibility is only a handful of games away, and with time, could even add third base to his resume. In the month of May, there were only seven players with at least two home runs, five stolen bases and a .283 or higher batting average, but Morel was the only one to do it in less than 20 games played.

Prior to joining the Marlins, Edward Cabrera had posted a 3.90 ERA and 1.30 WHIP across six starts. His first 2022 start with the Marlins was phenomenal. Aside from the four walks, he allowed just one hit, and struck out nine Rockies over six shutout innings. Cabrera boasts above-average fastball velocity and his changeup was unhittable yesterday, as it generated 10 whiffs on 22 swings.

Oh, did I mention that his changeup hangs out in the low-to-mid-90s? Absolute filth. He’ll need to harness his command and find the zone more frequently, but it would behoove the Marlins to give the youngster another start, as he is electric on the mound.

Not only did he homer three times, but one of them was a walk-off homer to give Colorado the win. Brendan Rodgers hit just .078 in the month of April with a whopping -28 wRC+, but since the calendar flipped to May, everything has flipped upside down. Colorado stuck with him and has reaped the rewards to say the least. Since the start of May, Rodgers is hitting .359 with a 162 wRC+, a .223 ISO and his strikeout rate is down at just 14.5 percent. He’s hit safely in 24 of his last 26 games, and he currently has the third-longest active hit streak in Major League Baseball at 19 games. Furthermore, since May 1st, he ranks top-10 in batting average and wOBA amongst all qualified hitters in Major League Baseball.

What’s Going on with Trevor Rogers?

A whole lot of bad luck hasn’t helped Trevor Rogers. His barrel rate is higher, which isn’t ideal, but a 9.5 percent jump in his HR/FB rate has led to home runs being a problem for Rogers this year, and the strikeouts are down. He’s generated less swings out of the zone, allowed more contact across the board, and his whiff rate is way down from last year’s 14-percent mark. Things have to improve moving forward for Rogers, but I’m not sure I’m actively trying to get him at the moment. For what its worth, in 10 starts this year, Rogers has allowed five or more earned runs in four of them, and he’s allowed eight home runs in his last six starts.

Jon Gray hadn’t quite lived up to the hype for the Rangers thus far, but he was dominant last night against the Rays, allowing just one earned run on three hits while striking out 12 over seven innings of work. It was just the second start this season where Gray allowed one or less earned runs, and his first outing with nine or more strikeouts. His fastball velocity was up a tick, and his four-seamer generated seven whiffs on 19 swings. Gray’s xERA (4.36), FIP (3.75), and xFIP (3.51) all indicate a turnaround should be happening, and perhaps this is the start of it. His next start will come against the Cleveland Guardians early next week.

The hope is that Bryce Harper can be available for Friday’s contest, but that’s still to be determined. Harper hasn’t seen the outfield since the middle of April due to his UCL issue, and he’ll be the team’s primary DH for the foreseeable future. The injury hasn’t slowed him down all that much as he’s hitting .303 with 10 home runs and six stolen bases this season, but this is something that is going to be around all year for the perennial MVP candidate.

I hate to be pessimistic, but it seems like Hyun Jin Ryu’s left arm is hanging on by a thread. This “soreness” word has been thrown around a lot with Ryu this year, and he’s already missed nearly a month earlier this year with left forearm soreness. When he has been on the mound, he’s struggled for Toronto, posting a 5.33 ERA and 1.30 WHIP across six starts, spanning just 27 innings.

It was rumored to be cramps, but it sounds like right lat discomfort is the culprit here. Rodriguez is nearing the big league club, but that appears to be set back a bit while the Baltimore Orioles evaluate the severity of this issue. In 11 starts at Triple-A this year, Rodriguez was 5-1 with a 2.09 ERA, 0.84 WHIP and had a sparkling 80:14 K/BB ratio. The talented right-hander had allowed two or fewer earned runs in six straight starts while striking out eight or more batters in four of those six outings.

C.J. Cron is 1-for-2 with a home run against Ian Anderson in his career, and while we typically love Cron against southpaws, he’s been excellent against righties this year, hitting .322 with a .404 wOBA and .934 OPS. This game is at Coors, so Cron is obviously in play because of that alone, as he’s hit a cool .385 with a 1.135 OPS at home this year. Anderson has been better on the road than at home this year, but Coors Field is a different beast, and his lone start in his career at Coors was underwhelming (4 ER, 2 HR in 3 IP in 2021)

In typical Colby Conway fashion, we need something with a plus sign here, so let’s look to Christopher Morel. He has five stolen bases in his last seven games and he’s getting on a ton thus far in 2022. His 13.4 percent walk rate and .268 average have his OBP up to .373 on the year and he has a .357 OBP against southpaws. I’ll chase the +500 here with Morel’s speed.