Fantasy Baseball May 13 Round Up: Bryce Harper Homers in Spite of Partially Torn UCL 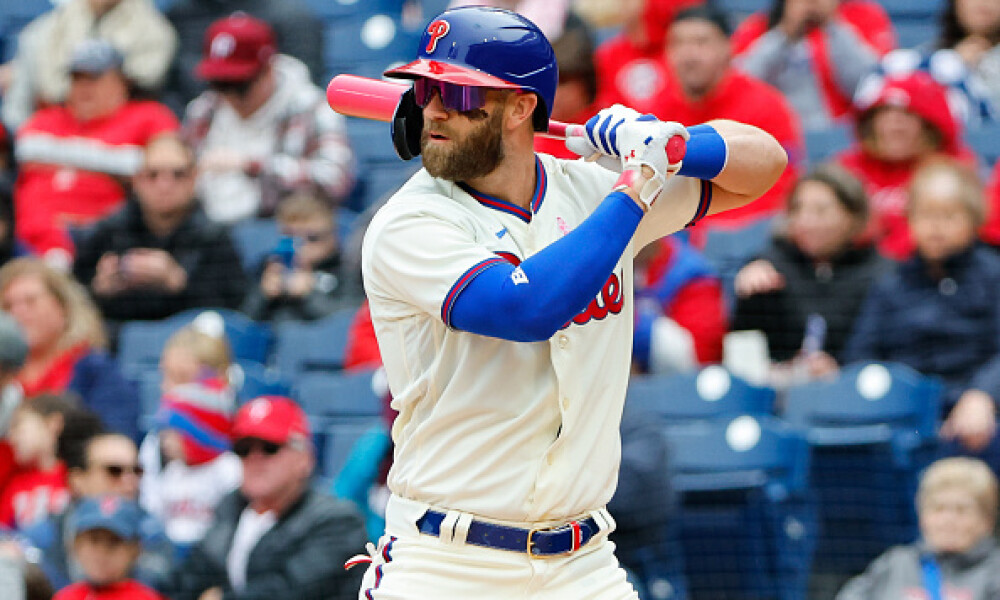 Thursday was a relatively quiet day for fantasy baseball as the MLB schedule left us with just three night-games following a short run of just five games during the day. But that doesn’t mean we don’t have some intriguing fantasy baseball news to sit and mull over the weekend. Most, if not all, of you have some fantasy baseball waiver wire work to do on Sunday and whether it’s FAAB bidding or simple waiver wire priority, some tough decisions may need to be made as you maintain your roster and hopefully improve you place in the fantasy baseball standings.

Let’s just get right to it and since it’s Friday the 13th, let’s start with the bad news, shall we?

This is obviously the biggest news as concerns developed regarding Harper’s arm; his elbow to be more specific. Turns out the fantasy baseball first-round pick is suffering from a partially-torn ulnar collateral ligament (UCL) in his elbow and while it’s not the same for position players as it is for pitchers, it’s a pretty big deal. Not if you watched Harper last night at the plate, but we’ll have to see how long that actually lasts. Apparently, with just the partial tear, Harper is still able to swing a bat, so the Phillies are going to DH him for the next month or so while the healing process gets underway. He went 2-for-4 with a double and a home run last night so it doesn’t look like it’s bothering him, but you should always pay attention to how he looks at the plate because if he starts to feel discomfort while hitting, it could raise questions as to whether surgery is going to be necessary. We won’t send you into any sort of a panic with him, but just keep in mind that, with this injury now common knowledge, you’re stuck with Harper on your roster. You’ll never be able to trade him for full value. Offers that are pennies on the dollar will come in, but you’ll need to be carful of those and you aren’t going to be able to shop him because, technically, he's “damaged goods.” Unless someone is will to pay full price, you’re stuck. But that’s not even the fantasy impact that should keep you up at night.

The issue for many fantasy baseball players out there comes in the form of the Philadelphia Phillies pitchers. We’ve already discussed how sketchy the infield defense has been, but now the focus turns to the outfield. With Harper locked in as the team’s DH, Nick Castellanos and Kyle Schwarber are going to be locked into the corner outfield spots. Neither are strong defenders and eventually, the poor defense is going to hinder the outings of Aaron Nola, Zack Wheeler, Ranger Suárez and the others. We’re not talking blooper highlight reel sort of stuff, but over time, the poor angles these guys take or the bad jump they get on the ball will affect things. More balls are going to drop in for base-hits, more balls are going to fly over their heads, and neither Schwarber nor Castellanos are much of a threat to throw out runners trying to advance. It will be slow and methodical and likely sneak up on you, but if you are seeing issues develop with your starters, they might be the ones to jettison in a deal. Stick that in your fantasy baseball trade analyzer.

We are still awaiting test results and a full diagnosis, so for now, consider Pena day-to-day. He left the game with what the team is simply calling knee discomfort, but they say he is likely to miss at least the Friday series-opener against the Nationals. Expect a decision at some point today as to whether a stint on the injured list is necessary. It sounds like Niko Goodrum is the healthiest body the Astros have right now, so look for him to potentially see some extra at-bats against a weak Washington team this weekend.

Not that you were expecting much in the way of saves coming out of Cincinnati, but Sims has landed back on the injured list, the 15-day IL this time, with what the team is calling a bulging disc in his lower back. Reds manager David Bell does not know exactly how long Sims will be on the shelf but is already assessing his bullpen committee of Art Warren, Tony Santillan and Hunter Strickland. None are worth picking up right now, not just because of the closer-by-committee, but because the Reds absolutely stink.

If you can make weekend roster moves before the MLB games start Friday, then you’re going to want to remove Austin Hays. Baltimore Orioles manager Brandon Hyde says there is a “pretty bad” laceration Hays took on the hand after getting hit with a cleat. With Hays expected to miss a game or two, look for Chris Owings and Tyler Nevin to see a few extra plate appearances.

Is Dany Jiménez the New Closer for the Oakland A’s?

It sure looks like it, doesn’t it? When Lou Trivino landed on the COVID-19 injured list, the A’s turned to Jimenez who saw some decent work and notched three saves towards the end of April. When Trivino finally returned in early May, manager Mark Kotsay has seemed reluctant to turn the ball back over to Trivino in the ninth. Maybe he doesn’t think the reliever is 100-percent back, but in the meantime, Jimenez continues to get the work and should be rostered in all formats right now. And let this serve as a lesson to everyone moving forward – if your closer gets hurt or misses some time and the guy who fills in behind him is a solid replacement, don’t just drop the guy when the incumbent returns to action. Sometimes they re-injure themselves, sometimes they need a week or so to get back into the flow or sometimes, the manager just likes the replacement better and wants to see how long it lasts. Always hold onto the guy for at least a week and see what happens. Those who dropped Jimenez upon Trivino’s return are super-bummed right now.

As expected, we got back to the business of winning yesterday and all is right with the universe once again. The Astros did us proud in their game as both pitchers also helped keep the scoring down and the Rangers managed to pull through in a rather unexciting game against the Royals. Let’s keep that momentum rolling.

We’ll start in Colorado as the hapless Kansas City Royals head to Colorado to take on a Rockies team that is looking to end a four-game losing streak after being on the road for their last six. They had the day off yesterday which keeps them resting in their beds at home while the Royals had to travel from Arlington. On top of that, the Royals are facing lefty Kyle Freeland. We picked on them against a southpaw yesterday and their current .268 wOBA against lefties is allowing us to do it again. There’s a little juice here, but not enough to push us away.

Despite the Brewers offensive output against the likes of the Cincinnati Reds or the recent missteps by their bullpen (and that of the Marlins as well), we’re going to look at today’s pitching duel between Corbin Burnes and Pablo López and get ourselves amped up. Both hurlers are capable of keeping the runs off the board – Burnes with his 1.86 ERA and 50 strikeouts over 38.2 innings and Lopez with his 1.00 ERA and 35 strikeouts in 36 innings – and we’re going to throw our Captain Obvious capes on and invest. There is some risk given both bullpens, but neither offense has proven to be scary enough to chase me away here.

The Blue Jays have lost four-straight and everyone is showing concern for their lackluster offense right now. For me, there’s not much in the way of concern as things will easily fall back into place for this group. The pitching match-up is solid as Kevin Gausman squares up against Drew Rasmussen, but I will lean on the Jays to right the ship here and head into the weekend looking to re-establish themselves as a dominant force in the AL East. Going up against the Rays can be tricky, but with the way Gausman is throwing right now, it’s tough to bet against them.