Greg Jewett takes an in-depth look at Tom Murphy and lets fantasy baseball owners know what to expect from the Seattle Mariners catcher during the 2020 MLB season. 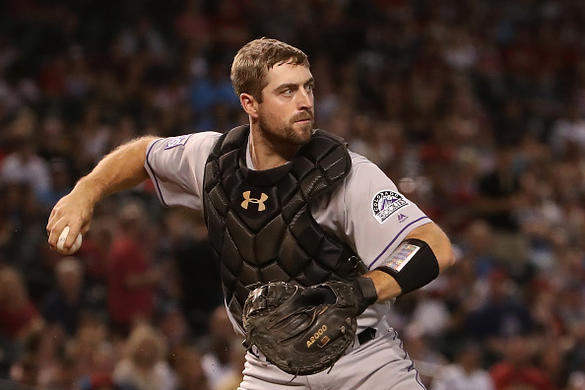 Representing a power part of a productive catcher platoon for Seattle last year, many overlook that Tom Murphy launched 18 home runs in only 260 at-bats (one every 14.44) last season. Could a player breakout after leaving Colorado? It remains to be seen but Murphy showed some signs of growth in 2019. He appeared in 76 games with 32 runs, 40 RBI, two stolen bases and a respectable .273/.324/.535 slash line. Murphy recorded a 6.8 walk percentage with a 31 percent strikeout rate and the third best isolated power (.262) among catchers with at least 250 plate appearances. It’s strange to see Murphy fueled by a .340 batting average on balls in play (BABIP) but this almost aligns with his career .331 BABIP.

Trying to discern how much of the gains displayed by Murphy will carry over to 2020 will determine his ceiling for fantasy. There’s no way to correlate this information, but digest his second half numbers versus what Mitch Garver did after the All-Star break in 2018:

Y. Chirinos - SP
TB1
Yonny Chirinos (triceps) is scheduled to throw a bullpen session on Thursday or Friday.
And if that workout goes well, there's a chance he could slide right back into the Rays' starting rotation at some point early next week, or possibly even on Sunday against the Blue Jays. The 26-year-old right-hander has been on the injured list since August 6, retroactive to August 3, because of triceps inflammation. He had a 1.04 ERA with seven strikeouts through 8 2/3 innings (two starts) this season with Tampa Bay.
Added 8:54 am (EST)
Added 8:54 am (EST)

B. Anderson - 3B
MIA
Brian Anderson hit a three-run homer Wednesday off the Blue Jays' Nate Pearson.
We're not sure why the Marlins have their best player batting fifth, but at least they're not shifting Anderson between third base and the outfield this year. He's batting .286 with four homers and 13 RBI in 12 games.
Added 12:37 am (EST)
Added 12:37 am (EST)

B. Bichette - SS
TOR1
Bo Bichette went 5-for-5 with a homer and a walk Wednesday in the loss to the Marlins.
Bichette is the first player this year to reach base six times and homer in the same game. The last Blue Jays to do it was, oddly enough, Yangervis Solarte on May 3, 2018. Bichette started out cold this season, but he's homered in three straight and hit in seven straight. His OPS is all of the way up to 1.034.
Added 12:34 am (EST)
Added 12:34 am (EST)

T. Shaw - 1B
TOR
Travis Shaw hit his first two homers Wednesday against the Marlins.
Shaw had a groin injury last month and a family emergency that kept him away from the Blue Jays for nine days, so he's still trying to settle in. Maybe that happened tonight. He definitely has mixed-league upside while playing regularly and hitting in the heart of the order for the Blue Jays.
Added 12:31 am (EST)
Added 12:31 am (EST)

R. Gsellman - RP
NYM
Robert Gsellman yielded three runs in two innings Wednesday in his start versus the Nationals.
The start tonight was his first since 2017, when he had a 5.19 ERA in 22 starts and three relief appearances. The in-season stretching out of Gsellman will take some time, and it's quite possible it won't work out for the Mets. They'll definitely need to rely heavily on the pen in his next few outings.
Added 12:23 am (EST)
Added 12:23 am (EST)

A. Sánchez - SP
WSH
Anibal Sanchez was roughed up again Wednesday, surrendering five runs in 2 2/3 innings against the Mets.
Sanchez's velocity is down some, and he has struggled in all three of his starts, leaving him 0-3 with a 9.69 ERA. If he's not better next time out, the Nationals will have to consider trying someone else; they just can't afford to be very patient in a 60-game season.
Added 12:20 am (EST)
Added 12:20 am (EST)