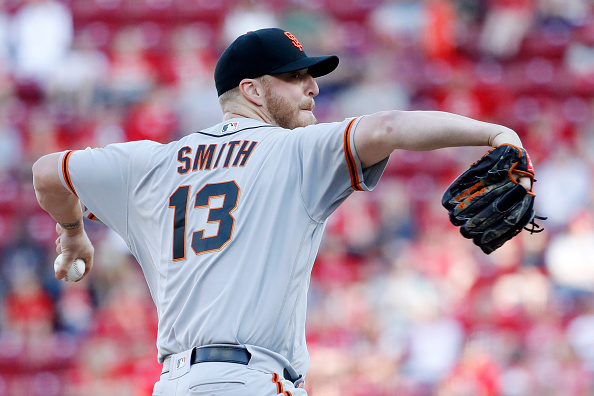 For the second straight off-season, Atlanta strikes early in free agency. Will Smith agreed to a three-year deal worth $39 million with a 2023 team option. Baseball can be a copycat league in terms of building or rebuilding. Atlanta took note of the depth and talent in the Yankees bullpen. New York could shorten games in 2019 along with giving their starting pitchers rest in season not trying to squeeze extra innings out of them.

At the trade deadline, Atlanta added Mark Melancon , Chris Martin and Shane Greene . Although Martin can leave via free agency, putting Smith in a bullpen with Greene and Melancon provides much needed depth in high leverage moments. Bake in Brian Snitker who owns an itchy trigger finger in the late innings and it could be a murky bullpen early on in 2020 for fantasy owners. Just what they wanted to hear, right? Well, no.

For starters, a look at Will Smith versus Mark Melancon in this tweet from Braves beat writer, David O’Brien:

Smith made his debut on May 2nd, 2018, returning from injury. Since then, only Kirby Yates , Josh Hader , Felipe Vázquez , Taylor Rogers , Liam Hendriks , Seth Lugo and José Leclerc own a higher WAR according to Fangraphs. It seems like recent memory suggested the Giants would enter 2019 giving Mark Melancon a chance to close, but Smith won the job. For now though, fantasy owners will work off of this suggestion until things change:

#Braves still planning to have Melancon be their primary closer. Things can change, of course, but that's the plan. Melancon only under contract one more season (at $14M). Will Smith , his former Giants teammate, is signed for 3 w/ 4th-year option.

Smith relies on his four-seam fastball and slider but can use up to four pitches:

It’s worth noting his fastball finished with a .302 expected batting average against versus the .126 expected average by his slider. Hence the increased usage of the pitch last year. More impressive, was the 55 strikeout percentage with the slider, while recording a 5.4 walk rate with the pitch.

Now, Smith did show some chinks in the armor after the All-Star break. His ERA jumped to 3.72 with a 43:13 K:BB in the second half compared to a 1.98 ERA and 53:8 K:BB in the first half. Keeping Smith healthy should ensure a return on investment, but will Atlanta really rely solely on Mark Melancon for the whole season? Past practice suggests Snitker will not. He’s shared time already with Arodys Vizcaíno and A.J. Minter . Snitker also announced after the trade deadline it would be Greene as the closer with Melancon racking up 11 saves with a robust 24:2 K:BB in 21 innings with the Braves after his acquisition.

For now, owners will need to treat this situation like the White Sox last preseason trying to draft both Alex Colomé and Kelvin Herrera in order to canvass the team’s save shares. If drafting Melancon, getting Smith as his protection makes sense. But it also makes drafting more difficult. Personally, I will avoid this early on with most shares betting on Will Smith garnering more through the season. He held off Melancon all year while they were teammates.

As for the Giants, it appears they will enter the market for a veteran closer or reliever to help groom and provide insurance for Shaun Anderson . Anderson notched 13 saves with Florida University in 2016 with a 0.97 ERA in 36 appearances. His transition back to the bullpen did not go great in 2019, but his experience in the role does provide hope. Due to his inexperience owners will hope Anderson’s ground ball rate migrates towards the 53.3 rate he posted at Triple-A last season. His slider will be a key to future success in high leverage. Time will tell, but for now, Anderson remains a late round target for cheap saves until San Francisco makes some moves this off-season. Stay tuned.

Be sure to stay with Fantasy Alarm in order to remain ahead of the competition across all fantasy formats.