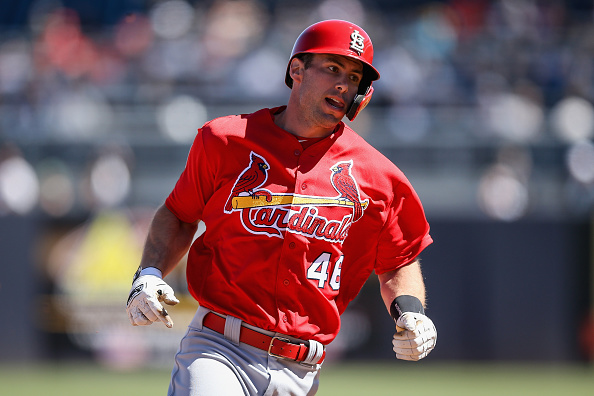 Whether perusing all the player profiles or scouring the tiers, it’s time to cash in all the knowledge in the last weekend before baseball ensues. Preparing for the 26 week marathon can be daunting, but knowing when players could be targeted depending on the site one’s league uses can be important. Especially if relying on the draft data on the site.

With this in mind, this week’s installment of the draft trends and average draft position (ADP) will try to illustrate when the most popular players, by position, will be taken to stay a step ahead of the competition. Taking targets, not getting cute playing the hope he will be there next round game, wins leagues. Using the information on Fantasy Pros for cumulative data in ESPN, CBS and Yahoo drafts along with the last week of 12-team drafts in the NFBC, it’s time to win those leagues. 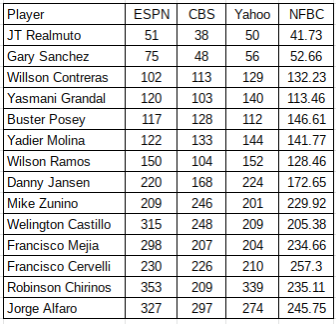 It’s clear both J.T. Realmuto and Gary Sánchez exist in a tier of their own at catcher. If one misses out on them in one catcher formats, waiting to get a Yasmani Grandal or Yadier Molina makes sense. Two catcher leagues require a bit more strategy to survive the dearth of talent, but it’s possible.

Viewing the numbers above, it’s easy to see which leagues deploy one catcher versus two in the data. Fantasy owners love upside. Yes, Danny Jansen will start for the Blue Jays, but will Francisco Mejía overtake the strong defense and game calling of Austin Hedges ? It’s too expensive to find out. Not shown in the chart, Yan Gomes continues to rake in the spring and should get a 60-to-40 split at catcher for the Nationals. Austin Barnes will start every three out of five games according to the Dodgers, so his high contact rates should see a rebound in value. If the Red Sox do trade Sandy León , late round fliers on Blake Swihart could finally pay off. Yes, I still believe. 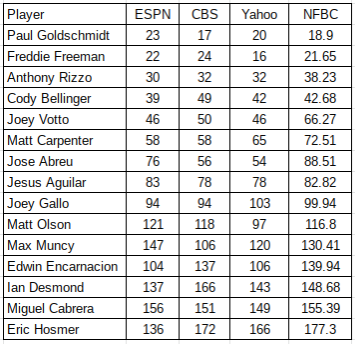 With the depth at first base being questioned all preseason, recent injuries to Matt Carpenter (back) and Matt Olson (hand) further muddle the position. Cody Bellinger seems primed to rebound and José Abreu could be playing for a contract. But, will Joey Gallo hit above .220? Will Joey Votto ’s power bounce back? How much playing time will Max Muncy accrue? Can Ian Desmond play center field in Coors? This does not even explore if Jesús Aguilar carries over his breakout from last year or if Miguel Cabrera can log 125 games.

Be sure to game plan this position if missing out early on rostering one. If this does happen, keep Luke Voit , Tyler White , Justin Smoak and Jay Bruce in mind. Yes, being serious. 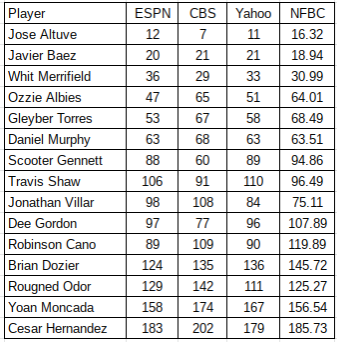 Normally a stable skill set to invest in, José Altuve ’s showing some signs of wear and tear. With the later round targets teeming at second base, getting a safer option near Altuve’s ADP makes sense, especially if reaching for a player like Aaron Judge instead. Where Ozzie Albies bats in the lineup will contribute to his overall production and it would help if he would hit versus southpaws.

Please note Travis Shaw can be used at second or third base, but for the purposes of this article, he’s listed above. If hunting for speed, Dee Gordon should run often for Seattle. Jonathan Villar ’s value seems all over the place, but he’s targeted much higher in NFBC formats. Rougned Odor could be the cheapest 20 home run and stolen base option at his price point. Unless of course, Yoán Moncada takes a step forward in his development. One can get Scooter Gennett at a reasonable price, but Robinson Canó ’s even cheaper. Need late power, Jonathan Schoop could hit 25 dingers. Hunting for batting average insulation with double digit home runs and steals, remember about Adam Frazier . Get the picture? 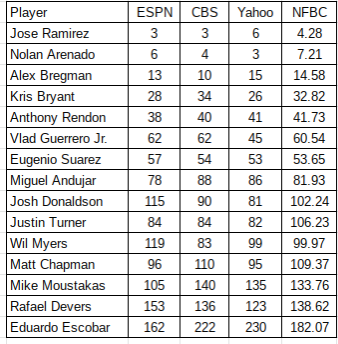 After injury befell Francisco Lindor this preseason, José Ramírez moved into the third spot overall in many drafts. His second half did not light the world on fire, but he walked more times than he struck out last year while racking up counting statistics. Nolan Arenado signed a massive extension and will remain in Colorado. Fantasy owners breathed a collective sigh of relief.

Personal dark horse MVP candidate, Anthony Rendón could explode this year, his price remains reasonable at a shallow position. It’s take your pick range between Josh Donaldson , Wil Myers , Justin Turner and Matt Chapman . Most lean to the younger and healthier option from Oakland. Speaking of cheap power, Mike Moustakas could hit 40 during a full year with the Brewers and add second base eligibility during the season. It’s tough to believe Rafael Devers will only turn 23 in October. He could be primed for a post-hype breakout. 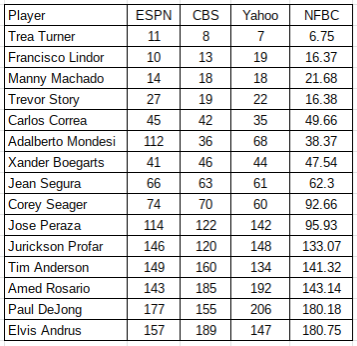 There’s speculation Lindor could play opening day, it’s risky but he’s well ahead of schedule making him an intriguing upside play compared to his price. In other years, Trevor Story could be a first-round option. His average could regress, but a 30 home run with 15-plus stolen base upside proves to be a rare option.

Depending on the site, Adalberto Mondesi could be a very cheap source of stolen bases. He’s a boom or bust type of profile, but if he reaches 15 home runs and 40 stolen bases, getting after pick 100 on ESPN will be highway robbery. No one seems to love Paul DeJong , but he could hit fourth or fifth in the Cardinals lineup in betwist Paul Goldschmidt and Marcell Ozuna , seems pretty ideal. 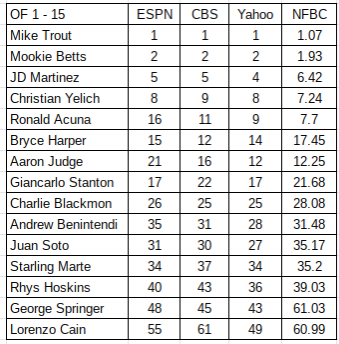 There’s not many surprises atop the outfield ADP’s. Getting Mike Trout or Mookie Betts will be an advantage this year. But, reaching for Aaron Judge over Bryce Harper happens in Yahoo drafts, should it be this way across the board? Every year it feels like Starling Marte gets overlooked, and this one’s no different. He’s battling a stiff back, but, Marte’s capable of 20 home runs and 40 stolen bases, if he plays 145-plus games. 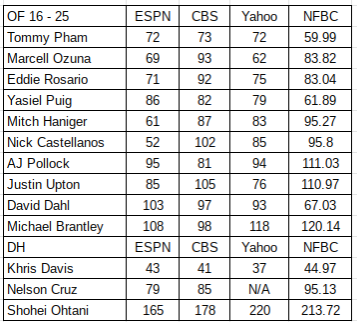 This next grouping mixes in the top three utility players along with the next group of outfielders in order to formulate a plan. Please take note of how Yasiel Puig and David Dahl ’s ADP’s fluctuate. If wanting to roster them, they provide bargain upside plays on every site except the NFBC. Mitch Haniger sees a spike in his ADP on ESPN, but will be a terrific upside play on all the other venues. Every year, Khris Davis gets selected three-to-four rounds ahead of Nelson Cruz but they’re skill sets remain so comparable.

For reference, spring sensation Victor Robles goes off the board in NFBC drafts inside the top-80, but he’s outside the cumulative top-25 outfielders in the Fantasy Pros data. Michael Conforto resides inside the top-100 in NFBC drafts but like Robles, tumbles on other sites in spite of owning 40 home run upside. Plan accordingly and do not be afraid to pay over value to roster them. 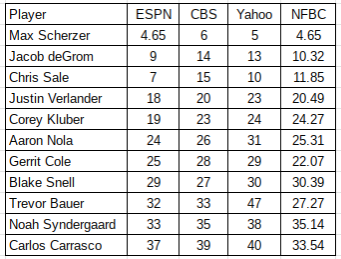 In order to sift out the noise, here’s the top tier(s) of starting pitcher from the four sites. With pitching moving up the draft boards, it will be pivotal to note how they get valued in individual draft rooms. Not sure how Trevor Bauer drifts in Yahoo drafts, but near pick 50 for a potential top-5 arm seems like an oversight. If Noah Syndergaard could log 180-to-190 innings, he seems primed to put it all together, but it’s a tough division now. 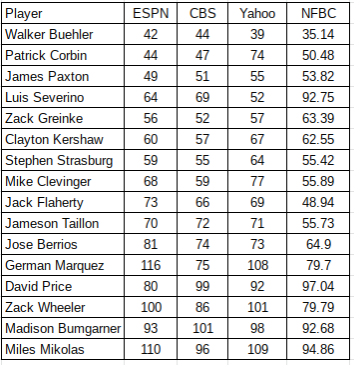 After the big 11, the next tiers emerge. Walker Buehler owns the arsenal to join them, but will he be allowed to throw enough innings to do so? It will not be cheap to find out. Injury concerns, whether current or from the past, linger within this group. Plus, young arms with the talent to step up like Jack Flaherty , José Berríos , German Márquez and Jameson Taillon reside here. Still not sure what to make of Madison Bumgarner , it feels like he will be a polarizing player this year in drafts along with rival Clayton Kershaw . If taking a risk here, be sure to mitigate with one of the arms in the first chart. 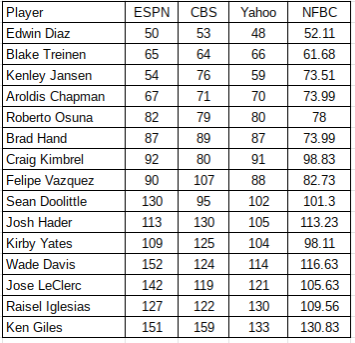 Paying full retail for saves will be a tough decision to make in most drafts. With more bullpens becoming fluid or shared roles, getting a top closer makes sense, however, it also causes an owner to sacrifice innings or at-bats in the process. In order to navigate the most volatile category in fantasy, here’s some thoughts:

When in the draft, be an effector not a reactor. Avoid the inevitable runs, hit your marks and do not succumb to paralysis by overanalysis. It’s a marathon, so prepare for the long haul and win the draft, not the chat room. Best of luck and fly those flags.