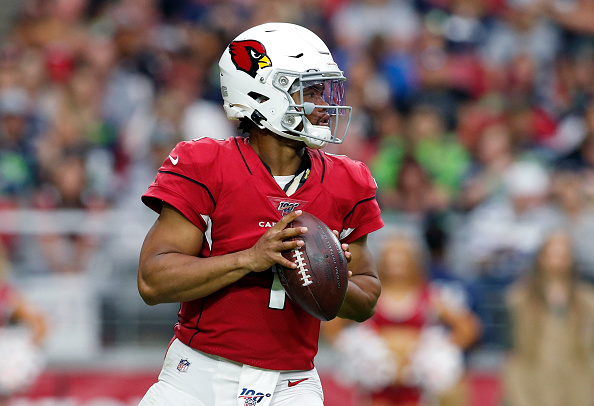 The old guard that includes Tom Brady , Drew Brees , Ben Roethlisberger , Philip Rivers , and Aaron Rodgers is starting to come to the end of their careers. Most will likely play another few years, but the NFL is looking for that next generation of stars. Thankfully for the league, there has been a great influx of talent in recent drafts. Some have found immediate success, some we are not sure of just yet from a fantasy perspective, and some have not quite made it yet. Let’s take a look at some of these players and their fantasy outlook for 2020.

If you remember correctly, there were many analysts that said Jackson needed to change position to have a job in the NFL. He certainly is making all of those people look bad as Jackson was the breakout star of the league last season and was named the MVP. He is a lethal combination of both passing and running and had 43 total touchdowns in 2019. There are games that it seems that he just simply can’t be stopped. Jackson is the consensus number one fantasy quarterback heading into 2020 and is being drafted at the end of the second round. While that ADP is a little too rich for my blood, I can certainly see why you would pick him then as there are weeks where he will win your matchup for you singlehandedly. Jackson certainly seems like he has an incredibly long and productive career ahead of him.

The number one pick of the 2019 draft, had an up and down rookie season. He started with two straight 300-yard games, but also had four games from Weeks 4-8 where he had no touchdown passes. Murray didn’t run a ton, but he certainly did a lot with it when he did. He certainly improved as the season went on, and his near 65% completion percentage was impressive in his first season. He is in a great pass-first system with Kliff Kingsbury in Arizona, and the team went out and traded for DeAndre Hopkins who gives him a legitimate elite receiver. This combination has his stock trending up and being drafted as one of the top five quarterbacks in early fantasy drafts.

His accuracy was a major problem coming out of college, and while he still isn’t razor sharp throwing the ball, he did raise his completion percentage from 52.8% in his rookie season to 58.8% in 2019. One of my favorite things about Allen and watching him play is his moxie on the field. You can see him getting more confident as he gets farther into his career. Sometimes that confidence gets a little too high, like with his ill-advised last second lateral in the playoffs last season, but over time it will have him making more good plays than bad. Allen is also one of the best running quarterbacks in the league and has run for over 1,100 yards in his two seasons. The Bills went out and got him a great receiver in Stefon Diggs in the offseason, and he now has two great receivers with John Brown still in tow. Allen can throw the deep ball with the best of them and has a great career ahead of him in the NFL. In just two years he has already taken his place among the top 10-12 quarterbacks in all of fantasy and he will continue to get better.

The first pick of the 2018 draft has been the very definition of a roller coaster. His rookie season he broke the record for most touchdown passes for a quarterback in his first season, and last season he was a borderline disaster. Mayfield had only five multi-touchdown games the entire season and had just one fewer interception than he had touchdown pass. He doesn’t have a lot of upside running the ball, but he has a wide array of weapons. Both Kareem Hunt and Nick Chubb are good at catching passes out of the backfield. Jarvis Landry and Odell Beckham are both legitimate NFL receivers, and the team brought in Austin Hooper to be a great tight end. The Browns also brought in offensive tackle Jack Conklin to help give him more time to throw the ball. Mayfield is a great QB2 if you are a person who drafts two quarterbacks, and certainly has the tools in front of him to be successful. Whether he channels his rookie season or his second year in 2020 will be one of the most fascinating storylines of the year.

He is one of my favorite quarterbacks who isn’t being drafted in the top 12 this year. He had five 300-yard games in the 12 that he started and had three games with four or more touchdown passes. The kid definitely has talent and has a good number of weapons around him to throw to. It will be interesting to see how new Offensive Coordinator Jason Garrett changes the offense, but Jones has the arm to make all the throws. He has great upside as well with his ability to run the ball, and his best days are still ahead of him. He has already made people forget that General Manager Dave Gettleman was widely criticized for using the sixth overall pick on him. If Jones doesn’t finish this season inside of the top 12 fantasy quarterbacks, he will definitely do it in 2021. His future is so bright, he has to wear shades.

He will be one of the more intriguing storylines coming into the season. He didn’t start a game until Week 13, but he did show signs of being a legitimate starting quarterback in the league. The Broncos doubled down on their young quarterback by bringing in Melvin Gordon to help with the running game and drafting Jerry Jeudy and K.J. Hamler to give him every chance to succeed. Lock has a dynamite arm who can make any throw on a football team. He had seven touchdown passes in five games last season and had a great rapport with star receiver Courtland Sutton . There might still be some growing pains with him in 2020, but it certainly seems that Denver has found their franchise quarterback, and if he isn’t fantasy relevant this year he should be someone we are considering as soon as 2021.

The third pick in the 2018 draft, Darnold is still up in the air as far as his future as a fantasy quarterback. Darnold has done enough to prove that he will be a starter in this league for a long time, but there are still questions about how dynamic the offense can be or if he has good enough weapons to be successful. He does need to cut down on the interceptions a little, but he has the makeup to be a successful NFL and fantasy quarterback. The Jets brought in Breshad Perriman and drafted Denzel Mims but will that be enough to get them to take the next step to be a good NFL offense? The quarterback position is deep enough that Darnold doesn’t even come into consideration for a fantasy quarterback unless you are in a deep superflex league, but he is certainly someone to monitor to see if he starts off well and if he can keep it going.

He has a cult following in the NFL for his name, his ‘stache, and his play on the field. The Jags offense isn’t really dynamic enough for him to be considered a consistent fantasy quarterback. However, the Jaguars did add another offensive weapon in the draft in Laviska Shenault, and D.J. Chark emerged as a dynamic receiver last season. Jacksonville has the weapons, and Minshew only threw six interceptions last season. He started out really hot with five multi-touchdown games in his first right, but then cooled off down the stretch. He finished strong with 295 yards and three touchdowns in the season’s final week, and he is now the undisputed starter coming into 2020. He doesn’t appear to be someone that you can own and start consistently in fantasy, but if you are a quarterback streamer and he has an easy matchup, The ‘Stache could get you through a few weeks during the season. Although I don’t come into the season with a ton of confidence in him, Minshew Mania looks to run wild again in 2020.

He did finish the season with back to back two touchdown games to finish his rookie season, but overall 2019 was not good for Haskins. Those four touchdowns did come against two very weak defenses against the pass, and there was far more bad than good last season. His offensive line isn’t great, he has one solid receiver, and the running game was less than stellar. There are still many question marks for Haskins coming into his second season, and unless you are in a deep superflex league, he shouldn’t be considered for your fantasy league. He still has a great deal to prove but having Ron Rivera come in as coach was certainly a step in the right direction. Personally, I have very little hope for Haskins in the coming year.