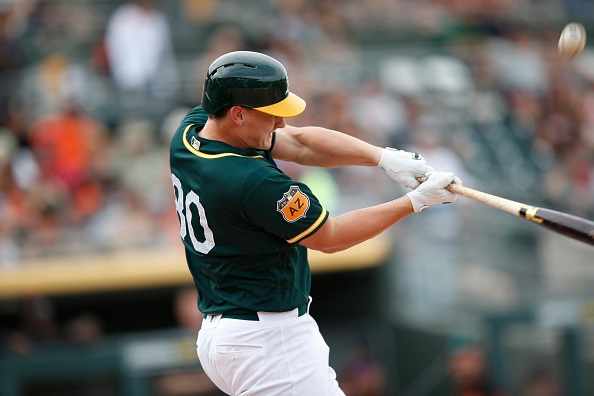 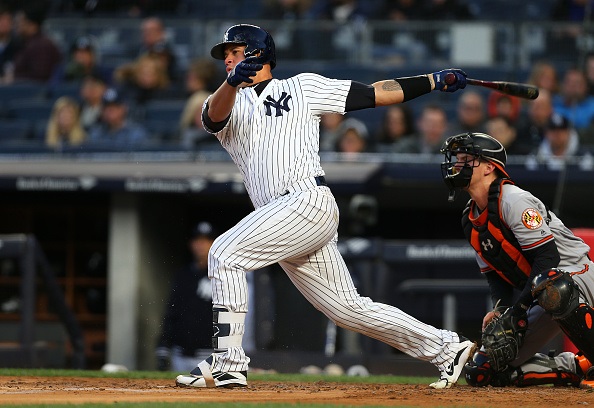 Backstops, not the fences you played in front of on little league fields, but the live human beings donning the gear, are an important position in baseball as one half of the battery. However in the fantasy realm they have long been known as the shallowest position in the game with only two-three guys that are above average producers each year. Gary Sánchez and Buster Posey are the two names that come to mind immediately when referring to the spot, but who are the next batch of catchers that are coming up? That’s exactly what this week’s piece is about so that you have a leg up on the competition in nabbing the next impact bat at the spot.

One thing to keep in mind with catchers is that the impact bat statistics are a lower bar than with other positions. A catcher that hits .280-.290 is an elite average guy at the spot and if he hits 25 dingers a year, that’s elite in that spot too. The other key thing to keep in mind is that catchers develop later than other positions do and often times a team’s top catching prospect won’t come up until they are 24-25 years old or so, compared to 21-22 for other positions, it’s just how the position works with them having to learn the nuances of the footwork, calling a game, hitting, and stopping the run game.

Ruiz is the Dodgers third-ranked prospect in their system and he’s the third-ranked catcher in all of the minor leagues, behind only Francisco Mejia and Carson Kelly . The 19-year-old backstop was signed out of Venezuela on his 16th birthday in 2014 and since then has moved through the Dodgers system, speeding up in the last year. Now at Double-A Tulsa to start the 2018 season, he split 2017 between A-ball and High-A with 63 games spent at the first stop and 38 in the second. In that span he slashed .316/.361/.452 with eight homers, 58 runs, and 51 RBI.  Ruiz is a switch-hitter which adds to his value, but he does more pop from the left side as his .310 slugging mark from the right side demonstrates. Of the 11 homers he’s hit since his pro debut in 2015, six came in the 38 games at High-A last year, showing that he maybe finding that raw pop that his short, compact, swing can generate. It would be nice to see Ruiz improve his walk rate, which hovered around six percent last year, making that his best mark yet. The strikeout rate is fine at 13% for his career though. At just 19, he’s got time left to develop, likely another 2-3 years in the minors, and he mainly has to work on cutting down runners given that he threw out just 22% of would-be base stealers last year. If he can figure that out though, he should be .280+ hitter with double-digit pop as an everyday backstop in Chavez Ravine.

A third round pick by the A’s in the 2016 draft, Murphy is now the fourth-highest ranked catcher in the minors and the eighth-ranked prospect in the A’s system overall. At 6’3” and 215 pounds, he has the size to stick behind the plate and yet be agile enough to provide great defense in that role as well. His main calling card is his plus-plus arm and his plus pop times that pretty well shutdown the opponents’ running game, to the tune of only 46 runners attempting to steal in 98 games last season. That’s not to minimize his offense either. He slashed .249/.313/.410 with 13 home runs, 48 RBI, and 47 runs scored across two levels (High-A and Double-A) last season. His numbers in Double-A (in 53 games) were underwhelming with a .209/.288/.309 line at the higher level. Murphy was slightly unlucky with BABIP marks of .323 and .232 respectively last year. The now, 23-year-old, is repeating Double-A to start out this year and through five games is hitting .350/.409/.600 with one homer, seven runs, and two RBI through 20 at bats. His offense needs to get more consistent as he progresses through the higher levels and his walk rate, near eight percent last year, needs to move upward, but he should be knocking on the door in Oakland some time in 2019 as an everyday guy with solid potential with the bat.

The Royals drafted Melendez in the second round of last June’s draft and gave him a well-above slot $2.09 million deal to keep him from going to Florida International. In his first taste of pro ball it was a mixed performance with a .262/.374/.417 slash line (.385 BABIP, .373 wOBA) with four homers, 30 RBI, 25 runs, and four steals in 47 games in rookie ball. Overall that is a very solid line for just under a third of a full season, but he disguises his 30.3 K-rate well. Tallying 60 strikeouts in 168 at bats is just too high to be sustainable as he progresses through the system. Starting the 2018 season at Class-A Lexington will start to show how the 19-year-old backstop can handle increases in skill level. So far through three games, he’s 2-for-9 at the plate with two runs scored, two walks, and six strikeouts. Clearly this is a very tiny sample size but if the strikeout woes continue, it could delay his development elsewhere in his game. Also one final note, while the four steals in 47 games look good, he is just 185 pounds while being 6’1”, so as he fills out more to deal with the rigors of catching full-time, the speed will dissipate to being slightly below-average.

Stephenson was drafted out of high school, which generally means a longer learning curve for catchers in pro ball, and then had a rash of injuries that held him to just 124 games combined between 2016 and 2017. However, when he’s been on the field, production has followed with a .278/.374/.414 line in 80 games at Class-A in 2017 with six homers, 50 RBI, 39 runs, and two steals. The BABIP of .322 and wOBA of .362 show he actually hit better than he got credit for and his production had him in the conversation, with Taylor Trammel and Jose SIri, for the Reds biggest breakout prospect. Stephenson has a 60-grade arm tool, but hasn’t figured out how to control it as he threw out just 20% of base stealers last year (16-of-77). Stephenson is now 21 years old and in High-A to start 2018, but a healthy, full-season, could go a long way to determining just how far away from the big leagues he is. Expecting 15-20 homers, a .260 average, and solid counting stats isn’t out of the question. 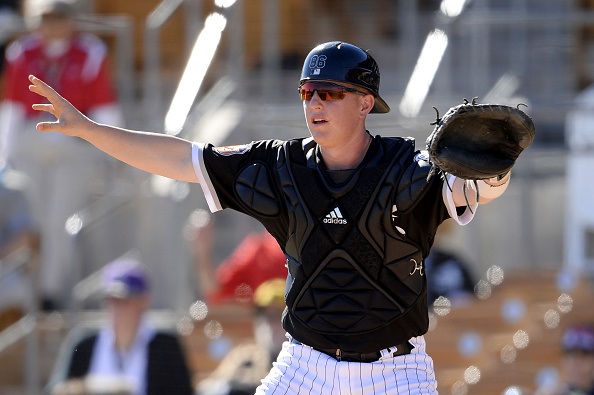 The 10th overall pick in the June 2016 draft, Collins has been a fast riser through the stacked White Sox system as he reached Double-A Birmingham in 2017. Last year was his first full season in pro ball, playing 113 games across two levels, and his offensive characteristics showed through with a .224/.370/.445 line with 19 homers, 70 runs, and 53 RBI. The high OBP is due to his very nice 18.4% BB-rate but a 27.4% K-rate brings that batting average down to an unhelpful level. When he was drafted he was known as a patient hitter with pop, and that’s what he is showing, the problem is that in most leagues his patience won’t help since his AVG is sub-.230 for his pro career. The White Sox are trying to improve his receiving and blocking behind the plate at the moment and have widened his catching stance to help with that. He also doesn’t have an overly strong throwing arm, but it is accurate and he managed to throw out 39% of base runners last season. If he wants to be a consistent everyday player at the majors, he needs to keep his swing shorter at times and work more at hitting to all fields (48% pull rate last year) in order to raise the batting average.

Tampa Bay is more known for developing top-tier pitching but in this case they have a chance to add a top-tier catcher to the ranks of their developmental history. Hernandez has been playing rookie ball in the Appalachian League for the last three years and has moved to A-ball to start 2018. His seasoning in the lower levels has been fruitful as he put up a nice line in 2017 over 54 games, a .332/.382/.507 triple slash with five home runs, 42 runs, 40 RBI, and two steals are also nice. He did have 22 doubles, a .379 BABIP, and .397 wOBA too. Hernandez is new to the catching thing, having been an infielder for Colombia’s 18U team prior to signing with the Rays, so there is still some learning to do with receiving, blocking, and calling a game, however his plus arm tool and quick catch-and-release had him cut down 57% of would-be base stealers in 2017 and 61.5% in 2016. Hernandez has a nice, easy, right-handed stroke that produces hard contact fairly routinely and generates an even spray of balls between ground balls, line drivers, and fly balls. He does get a bit pull happy (49.2% in 2017 and 55.3% in 2016) but that is correctable in time. The 20-year-old has all the tools to make him a top-five catcher in the bigs in a few years and one that will surely contribute to your fantasy team.

Varsho is the player on the list who is newest to pro ball, having been drafted in the compensation round following the second round of the 2017 Amateur Draft. He is also the most interesting prospect on this list, at least to me. The young backstop made his pro debut at Low-A for Arizona and played 50 games while posting a .311/.368/.534 slash line with seven homers, 39 RBI, 36 runs, and seven steals. The extra base hits were boosted by his 16 doubles and three triples as well, plus his 8.0% BB-rate and 14.2% K-rate are both nice marks in those categories. While the lefty-swinging, righty-fielding catcher was drafted to be behind the plate and his 32% caught stealing rate shows that, there is some question as to whether he will stick long-term behind the plate. Varsho is a candidate to move to left, but center isn’t out of the question with his 60-grade speed that is likely to stick around, and his offensive profile plays well there. The smooth, slightly uppercut swing produces easy power that gets a boost from the backspin he puts on the ball but can be pull happy at times. If he can keep working on his defense and throwing accuracy behind the dish, there is no reason he’d have to move from the position and he’d give the D-backs the backstop they’ve been looking for since Miguel Montero in his prime plus a dose of speed.