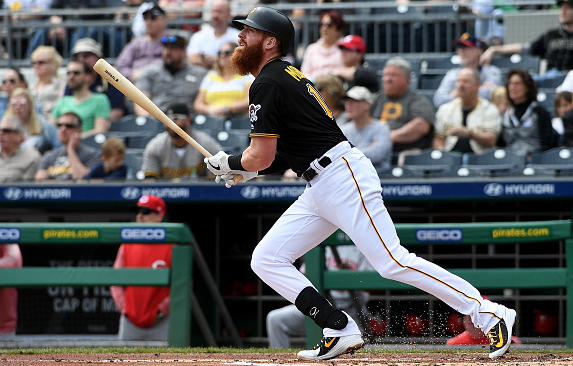 Another week has gone by, which means another week of stock risers and fallers. As I always say, player’s values never stop changing and it’s important to stay on top of whose value is changing and why. A player can have an overall strong line for the year, but be unrosterable. On the flipside of that, a player can have a terrible line for the year, but a recent run of success can have their value soaring. This week’s edition, outside of one or two names, will focus mainly on deeper players who may be available on the wire (somewhat similar to last week). Let’s dive in!

Colin Moran , 3B PIT – Moran has been getting everyday playing time and he’s taking advantage of it, hitting .295 with five home runs and 11 RBI over his last 12 games (44 at bats). The power surge is nice to see from a fantasy perspective, considering he only had 11 home runs across 415 at bats last year, but already has nine across 176 at bats this season. Where is the power coming from? He is entering his prime years (age 26-30), he has upped his fly ball rate by five-percent, he has upped his hard contact rate by five-percent, and is pulling the ball more often (the large majority of his home runs are pull side). The power boost is huge, especially considering the position he plays. He won’t hurt you in average either, hitting .273 on the year and .277 over his last 602 at bats at the Major League level. Add it all up and you have a deep league viable player. 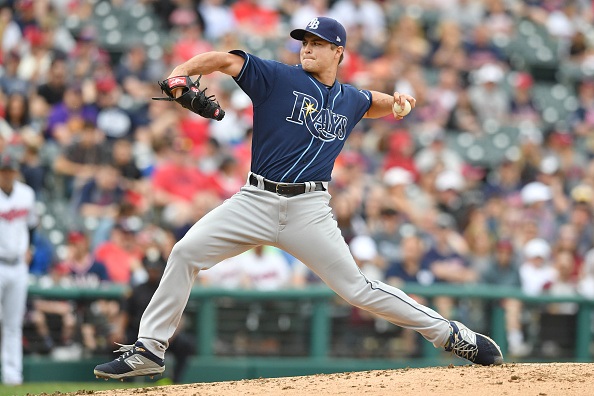 Jalen Beeks , RP TB – Beeks has been very effective this year working as a “primary” pitcher behind an “opener”. He is currently 5-0 with a 2.76 ERA and has struck out 45 across 49.0 innings of work. He usually only pitches three-to-four innings but since he comes in after the opener, he ends up pitching the fifth inning and becomes the pitcher of record for wins. His most valuable fantasy asset is that he is listed as a RP and can be slotted into RP spots in fantasy leagues that utilize them. He is also very valuable in leagues that have a maximum number of “starts” for the year, since none of his outings are counted as starts. His 2.80 FIP supports what he’s been doing, but his 4.30 xFIP and 4.08 SIERA point to some possible regression. His 13.3-percent infield fly ball rate is very strong, but his 2.2-percent HR/FB rate is probably not going to be sustained. He is an option in deep leagues and in leagues with specific rules that work in his favor.

Dakota Hudson , SP STL – Hudson has been pitching very well of late, compiling a 2.59 ERA and two wins across his last seven starts (41.2 innings). He hasn’t given up more than three earned runs since April 15, a span of nine starts, and he has lowered his ERA for the year from 6.08 to 3.70 in that span. The biggest negative with Hudson is his extremely low strikeout rate, as he has just 45 punch-outs across 65.2 innings pitched (6.2 K/9). That alone makes him not a viable option in leagues that use K/9 as a category and it makes him nothing more than a streamer in shallow standard leagues. While he may not strike guys out at a great rate, he does induce ground balls at a fantastic rate of 61.4-percent. He gives up fly balls at a very low rate of 20.0-percent, which leads to fewer extra base hits and stronger overall outings. Put it altogether and you have a guy with a low ceiling (because of the poor strikeout rate), but who has value in 15-team leagues.

Raimel Tapia , OF COL – Tapia is off to freezing cold start in June, hitting .147 (5-34) with zero home runs, one RBI, three runs scored, and eight strikeouts to zero walks. The cold streak has seen him drop from the leadoff spot in the Rockies lineup to batting sixth. Tapia has long intrigued fantasy owners and it seemed like he would produce if he ever saw consistent playing time, but that has simply not been the case this year. With the recent cold spell his overall numbers for the year now sit at a .256 batting average with five home runs, 22 RBI, 27 runs scored, and two stolen bases, none of which are at all beneficial to your fantasy squad. He has a lousy 29.9-percent hard contact rate and hits a ton of ground balls (49.7-percent rate). Simply put, there isn’t a whole lot to be excited about with Tapia right now, outside of the fact that he plays half his games in Coors. He can be left on the wire in most formats.

Max Fried , SP ATL – Fried came out of the gates lights-out to begin this year, but has seemingly hit a wall of late. Over his last seven starts, he has compiled a 5.61 ERA across 33.2 innings pitched and opposing batters are hitting .316 against him. In that span he has not pitched more than six innings in any of those starts and he has given up three or more earned runs in five of them (including three straight). His ERA for the year has jumped from 2.11 to 3.75 in that span. So, do we need worry about him? Short answer: not really. The good luck that he had in his first six starts (.265 BABIP) has turned into bad luck over his last seven starts (.388 BABIP). His strikes looking and strikes swinging percentages were the exact same in both time frames (17-percent and 11-percent respectively). This is what happens in sports, everything eventually balances out. Fried was never a pitcher that would continue to pitch to a low-two ERA, but a pitcher who should sit in the mid-threes. He may not be the fantasy ace that many hoped, but he should still be a solid piece in your fantasy rotation.

Mike Zunino , C TB – This one pains me, being a Zunino truther, but he has been a dumpster fire this year and more specifically since returning from IL. Since returning from IL on May 31, he has just one hit in 25 at bats, good for an unsightly .040 batting average. It gets even worse when you consider the fact that he is losing playing time to a hot Travis d’Arnaud (who was arguably the worst player in all of baseball prior to about two weeks ago). Zunino never hits for a great average, but normally supplies solid power numbers with 20 and 25 home runs the last two seasons, but has just three this year across 116 at bats. All that being said, it’s pretty tough to figure out why Zunino is struggling so badly this season when looking at the underlying numbers. He currently is setting career bests in soft contact (9.8-percent), hard contact (46.3-percent), strikeouts percentage (27.4-percent), and exit velocity (91.6 mph). Needless to say, he’s been extremely unlucky and it shows in his .228 BABIP, 8.3-percent HR/FB rate (half his career rate), and xSLG of .433 which is 105 points higher than his actual .328 SLG. Be prepared to pick him up (if he is on your wire) at the first sign of a hot streak. 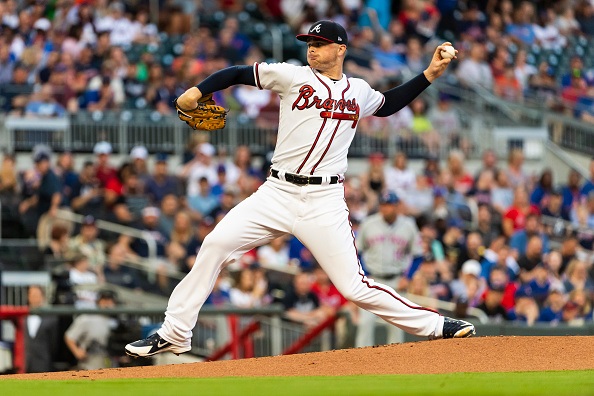 Sean Newcomb , RP ATL – Newcomb was a member of the Braves rotation to begin the year, but pitched his way out of it before eventually returning to Atlanta on May 6th as a member of the bullpen. Walks were a major issue as he issued eight free passes across his first three starts (12.1 innings) before being demoted. Since joining the bullpen, he has compiled a 1.42 ERA, a win, a save, six holds, 21 strikeouts and just two walks across 19.0 innings pitched. In a relief of Gausman yesterday, Newcomb fired 4.2 shutout innings, giving up one hits and zero walks while striking out six. If it were not for the Braves recent signing of Keuchal, Newcomb would likely be making his way back into the rotation, but as it is he will remain in the Braves ‘pen. His stock is only one to watch because of his current role, but if at some point he moves into a more prominent role (as a starter or possibly the closer) he will be worth adding as it appears he has turned the corner with his control issues.

Jason Vargas , SP NYM – Vargas tossed a shutout his last time out and has been pitching very well since April 19; he has compiled a 1.85 ERA and 34 strikeouts across 39.0 innings in that span (seven starts). He has given up one earned run or fewer in six of those seven starts, lowering his ERA from 14.21 to its current 3.57 mark. So why isn’t he a stock riser? It’s really hard for me to buy-in to his recent run of success. Keep in mind that we are talking about a guy who throws 80-poo (fastball sits 82-86) and gives up hard contact at an extremely high rate of 40.1-percent this year. He also has a 4.27 FIP, 5.05 SIERA, and 5.00 xFIP, so while his 3.57 ERA may look good, it’s very unlikely to continue. A good start against the Yankees tonight would make me more of a believer, but for now I am just waiting for the collapse. He is still too risky for fantasy purposes.