Jon Impemba breaks down the injury news regarding C.J. McCollum and highlights some players you can find on the waiver wire to fill the void in the short term! 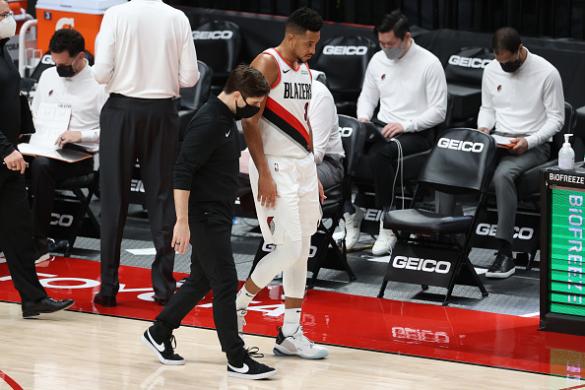 News broke late last night that Portland Trailblazers guard CJ McCollum is going to miss the next four weeks due to a foot fracture suffered during the team’s game against the Hawks this past weekend.

BREAKING NBA: C.J. McCollum has a fractured left foot and will miss an extended period of time, according to Shams Charania. Fantasy Analysis Here: https://t.co/9whr5XDQ1F

This was a tough blow for fantasy owners who invested in McCollum on draft day because they were watching a breakout season unfold as the 29-year-old guard was averaging a career best 26.7 points, 5.0 assists and 1.3 steals per game while making 4.8-threes per game while shooting 44-percent from beyond-the-arc.

With McCollum now out of the picture fantasy owners will be looking towards the waiver wire for some help when it comes to replacing some of the production lost and while it’s impossible to find a straight up replacement that will check all the boxes you can certainly find players who can contribute to a few of the categories you may need to help mitigate the loss from your roster.

Jordan Clarkson , UTA - Clarkson is among the most added players in fantasy over the past week so there is a chance he is no longer available in your leagues. However, IF you check the waiver wire and see that Clarkson is sitting there, I hope you already grabbed him before reading this article. Clarkson has been an elite scoring option off the bench for the Jazz this season, averaging 17.5 points, 4.6 rebounds and 3.0 three-pointers per game.  He is the top waiver priority for you if available.

Duncan Robinson , MIA – Robinson has likely found his way to some rosters over recent days with Miami dealing with their issues surrounding Covid-19 but in some standard league formats he is still owned in less than 60-percent of leagues. Robinson is one of the leagues best three-point shooters, averaging 3.8 three-pointers per game.  It’s likely a longshot that he’s available if you are in a deeper league format or a very active league but he would be my first choice if looking to boost your three-point category with McCollum out of the lineup.

Rodney Hood , POR – While everyone fully expected Gary Trent to take over the injured McCollum it was Hood who drew the start in his place and he looked great, scoring 21 points on 9-of-14 shooting over 25 minutes. Hood could very well be a serviceable replacement for McCollum should he stick in the starting lineup. During his career we have seen him be a solid outside shooter and someone that has the ability to score the basketball. Now, injuries have also been a big issue for Hood so the Blazers may never give him the 35 minutes a night that McCollum was playing but Portland’s offense scores a lot of points and now Hood is in a primary spot to do so as well.

Patty Mills , SA – Something has gotten into Patty Mills this season as the veteran guard is averaging a career best 14.7 points per game on the season and while he has always been a solid three-point shooter during his career we have never seen it quite like this. Mills is averaging 3.1 three-pointers per game while shooting 45.7-percent from three-point range. Right now, his 25 minutes a game is tied for his career high and while some of that playing time is likely attributed to the injury of Derek White, Mills is a widely available player that can help you out right now to replace some of the three-pointers missing from McCollum.

Cam Reddish , ATL – Yes, I know the Hawks guard has missed the last two games with an injury of his own but assuming that this is just a minor issue you could certainly take a stab here. Reddish is averaging 28 minutes a night and has popped off a few times of late for 20-point outings. On the season the second-year player out of Dule is averaging 12.2 points, 4.6 rebounds, 1.4 steals and 1.7 three-pointers per game.

Doug McDermott , IND – McDermott has found himself playing some real minutes for the Pacers of late and that is a trend that should continue with the team missing TJ Warren and Caris LeVert for the foreseeable future. McDermott is largely just a scorer that shoots from three-point range, but we have started to see some of the rebound numbers start to trickle up. Knowing that he is likely going to sit in that 30-minute a night range is somewhat appealing. If you find yourself in a deep league, now may be the time to take a look at Jeremy Lamb who is nearing a return following his ACL surgery and could very well be the Pacers starting shooting guard while LeVert is on the shelf once his minutes get ramped up. 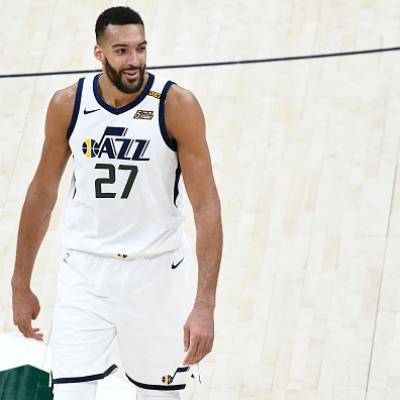 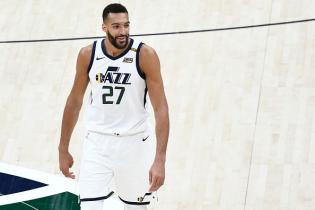 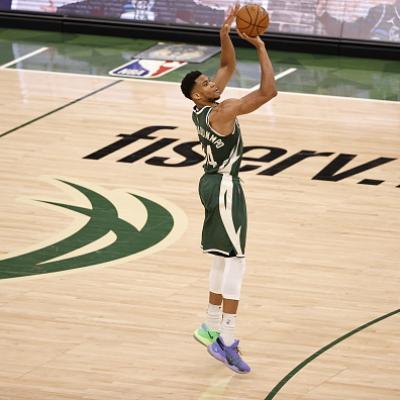 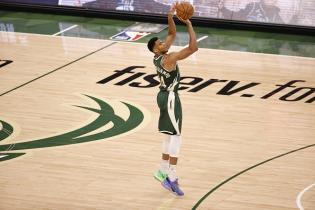 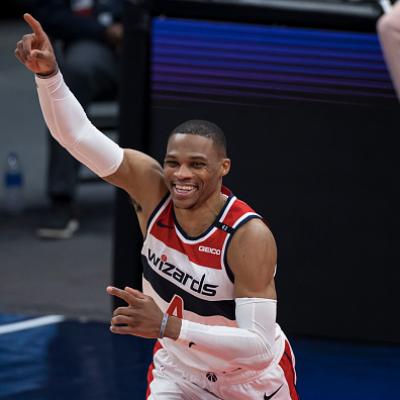 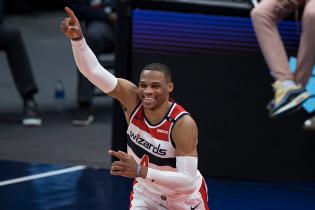 G. Bitadze - C
IND
The Pacers have fined Goga Bitadze and suspended assistant coach Greg Foster for an exchange that they had on the court during Wednesday's loss to the Kings, according to ESPN's Adrian Wojnarowski.
Bitadze made his return to action Wednesday night after missing the prior seven games due to a left ankle injury. The occasion was anything but joyous, however, as Foster had to be held back from going after Bitadze after the center appeared to tell him to "sit the (expletive) down" during active play. Foster won't be on the bench for Thursday's game against the Hawks, and Bitadze will be a little lighter in the wallet.
Added 12:20 pm (EST)
Added 12:20 pm (EST)

D. Hunter - SF
ATL
De'Andre Hunter (right knee soreness) was able to play some 3-on-3 Tuesday and did not have any issues following the session, according to Nate McMillan.
Hunter remains without a concrete timeline for return, but he is making strides in his recovery. "De'Andre did play some 3-on-3 yesterday and really didn't have any issues today," McMillan said Wednesday. "We will get him more work this weekend when we have a couple days to practice, but he played some 3-on-3 yesterday, and we look forward to getting him more work this weekend." Following Thursday's game against the Pacers, the Hawks will have three days off until they're scheduled to play again. Whether or not Hunter will be deemed healthy enough to play in time to have an impact in fantasy leagues remains to be seen, but those who have him rostered should already have alternatives in their teams.
Added 12:16 pm (EST)
Added 12:16 pm (EST)

A. Pokusevski - PF
OKC
Aleksej Pokusevsky (left knee contusion) has been ruled out for Thursday's game against the Warriors.
Pokusevski will sit for the third time in Oklahoma City's last four games. Isaiah Roby will be in line for another start, while reserves such as Josh Hall and Gabriel Deck will figure more prominently in the rotation.
Added 12:10 pm (EST)
Added 12:10 pm (EST)

L. Dort - SG
OKC
Luguentz Dort (right hip strain) is listed as questionable for Thursday's game against the Warriors.
While Dort did have to sit out seven games last month due to the hip injury, an interesting pattern has developed when it comes to his availability. He has played no more than two games in a row since his return, and with Dort having played on Sunday and Tuesday, it would not come as a surprise if he was held out Thursday night. If Dort ultimately sits, Theo Maledon, Darius Bazley and even reserves such as Ty Jerome, Josh Hall and Gabriel Deck become of even greater importance to the Thunder.
Added 12:04 pm (EST)
Added 12:04 pm (EST)

G. Trent - SG
TOR
Gary Trent Jr. (lower left leg contusion) is listed as probable for Thursday's game against the Wizards.
Trent Jr. has missed the Raptors' last six games, so if he's ultimately cleared don't be surprised if there's a minutes limit. He'll give Toronto a capable scorer off the bench, but his impact is likely to be minimal until he shakes off the rust.
Added 12:00 pm (EST)
Added 12:00 pm (EST)

Y. Watanabe - SF
TOR
Yuta Watanabe (sore right ankle) is listed as probable for Thursday's game against the Wizards.
Watanabe should be available for Thursday's game, but he won't offer much as far as fantasy is concerned. With Kyle Lowry and Fred VanVleet both absent from the injury report, Watanabe stands to return to the second unit. And with that, there's little reason to consider streaming him after his rare start Tuesday night.
Added 11:56 am (EST)
Added 11:56 am (EST)

A. Gordon - PF
DEN
Aaron Gordon missed all six of his shot attempts on Wednesday, finishing with just five rebounds, one assist and two turnovers across 22 minutes in a win over the Knicks.
AG has not stepped up like we expected him to in wake of all the injuries in Denver, and tonight's scoreless performance was coming off the heels of three-straight, single-digit stinkers. The Nuggets only have six games remaining on their schedule, and we doubt Gordon will suddenly turn things around over this final stretch. Don't hesitate to send him to the wire if you're currently scrapping through the Fantasy Finals.
Added 12:49 am (EST)
Added 12:49 am (EST)

A. Rivers - SG
DEN
Austin Rivers went off against the team that traded him at the deadline on Wednesday, tallying 25 points, three rebounds, three assists, six triples, three steals and one turnover in 28 minutes off the bench.
Rivers got his points efficiently, finishing 7-of-13 from the floor and 5-of-6 at the line, and he's going to have increased opportunity in Denver while P.J. Dozier (groin) and Monte Morris (hamstring) are watching from the sidelines alongside Jamal Murray (knee). Michael Porter Jr. confirmed after the game that this was indeed a revenge game, saying, "He’s talked to me extensively how difficult it was for him in New York. So he told me coming into tonight how aggressive he was going to be and he was trying to get those dudes back." He got his revenge tonight, but we still wouldn't trust him to be consistent, particularly with Denver's next two matchups coming against Utah and Brooklyn.
Added 12:41 am (EST)
Added 12:41 am (EST)