James Grande analyzes the fantasy implications for Al Horford and Steven Adams as they'll both be suiting up in 2020-2021 with new teams! 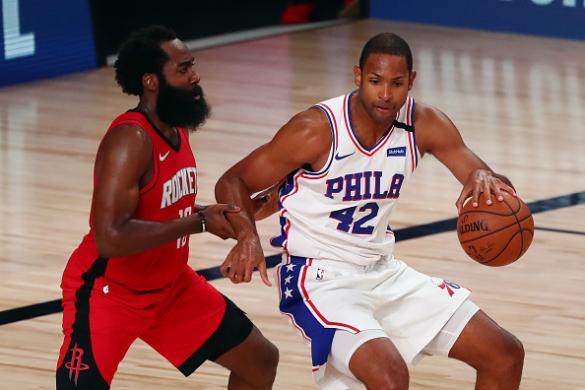 It was a rough 2019-2020 season for Al Horford as the fit in Philly wasn’t nearly as good as everyone anticipated it would be. He was even playing more power-forward, which has always been his natural position. The same can be said for Steven Adams in Oklahoma City as he battled health issues and limited playing time as well. Both have found new teams to call theirs with Horford heading to Adams old stomping grounds of Oklahoma City while Adams teams up with head coach Stan Van Gundy in New Orleans.

Before Steven Adams was traded, this trade wouldn’t have meant as much for Horford’s value in fantasy basketball, but that has changed with Adams now out of town. Oklahoma City’s current stable of big men other than Horford are Mike Muscala , Deonte Burton , Aleksej Pokusevski (first-round pick) and Vincent Poirier, so it’s safe to say Horford will see the floor plenty.

Horford’s points per output took a hit last year in Philly scoring under 12 PPG for the first time since the 2008-’09 season, his second in the league. His other numbers didn’t fall off, however, as he was as steady as ever in the rebounds (6.8 RBG) and assists (4.0 APG) categories. Maybe the connection is the fact he attempted the most three-pointers of his career with 283; 27 more than any prior season. 27 isn’t a big gap, but he played 15 less games last year than he did when he took 256 three’s. So yeah, it would’ve been a wide gap.

In Oklahoma City, there’s an opportunity for Horford to get back to his old ways and shoot more elbow jump shots or shots in the lane because there is no Joel Embiid impacting him on both areas of the floor. When you look at Oklahoma City’s current roster and break it down, Horford is likely the second-most reliable scorer they have, which says a lot about where they’re going to be in the Western Conference standings. Horford has a fantastic chance, even as he gets older, to be a very productive fantasy producer. He averaged 17 FP/game in standard ESPN category formats last year and he could very well be closer to 20 with the current roster construction in OKC.

The departure from Philly doesn’t give anyone on the 76ers roster that much extra fantasy value. There is a chance we see an uptick in rebounding from guys like Tobias Harris and Ben Simmons , but nothing major. Maybe a couple of extra shots on the perimeter for guys like Harris, Shake Milton and Seth Curry , but nothing to move the needle. Tobias Harris would be the one guy I’d think sees a small increase, but he was already a top-50 option last year as is.

With Derrick Favors departing to Utah, there was a need at center for the Pelicans and that’s where Steven Adams enters the fold. Despite seeing just 26.7 MPG last year, Adams was extremely productive averaging 10.9 points, 9.3 rebounds and a career-best 2.3 assists per contest in his final season with the Thunder. 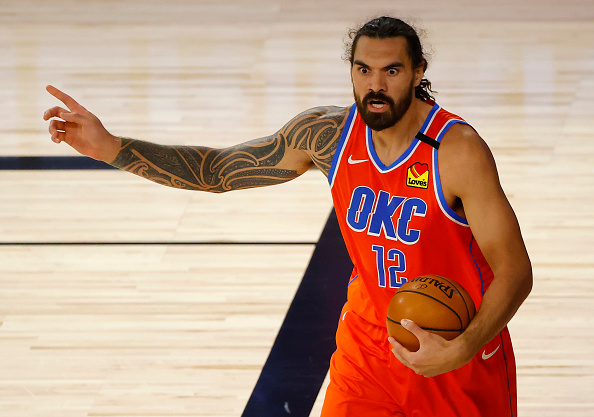 Adams is a bruiser and is someone who sets a lot of picks each game. He was involved in the pick-and-roll 22.5% of the time last year according to NBA.com, and was a 68.9% shooter on those plays. Hopefully with Jrue Holiday gone and a new head coach in place, the Pelicans rely on the PnR more, because Lonzo Ball was involved in PnR just 26.4% of the time, which doesn’t even rank in the top 100 of players with at least ten minutes [er game and ten possessions per PnR. This could be a detriment to Adams’ fantasy value.

What could be even more of a detriment is the fact that the Pelicans are loaded with talent, especially up at the top and they dominate the usage and counting stats. Adams finished 19th in FP/game last year on ESPN leagues amongst all players with center eligibility. He’s going to have a tough time finishing in the top-20 this year with a much more complete roster.

We mentioned it above, but with Adams leaving OKC, Al Horford is the clear cut number one beneficiary for fantasy value. He’s going to be in the PnR with Shai-Gilgeous Alexander A LOT this year and we know Horford’s ability to drift to the perimeter after setting a pick and knocking down some shots. The Thunder could offer some late-round fantasy value with guys like Lu Dort, Trevor Ariza (if he’s not traded again) and Aleksej Pokusevski, but that’s a big question mark. 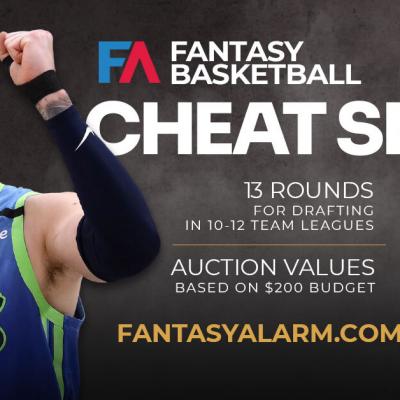 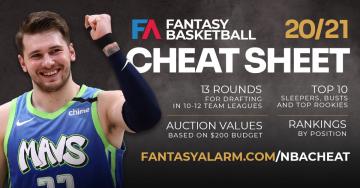 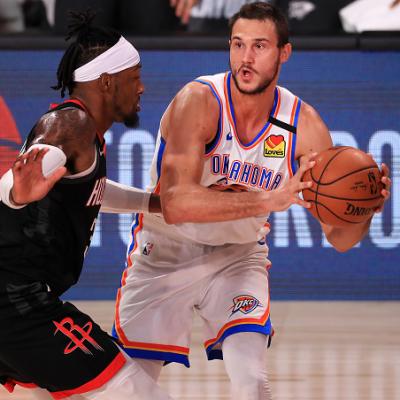 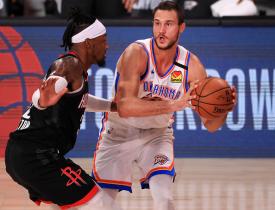 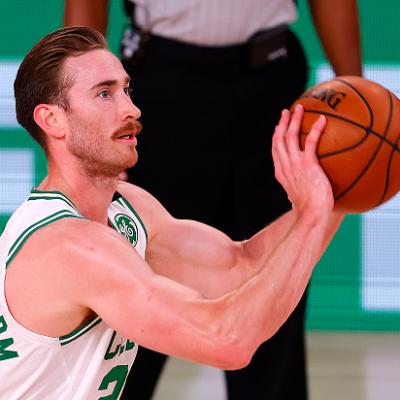 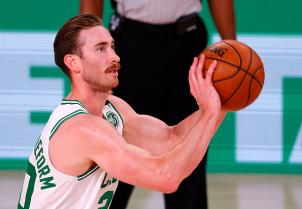 NBA Mavs vs. Lakers in prime time on Christmas Day

NBA Bojan Bogdanovic not sure if he'll be ready

D. Powell - C
DAL
Dwight Powell (Achilles) said he will be a "full go" when practice begins Friday.
Powell tore his Achilles in January so he's had roughly a year to recover. Kristaps Porzingis (knee) will be sidelined to begin the season, so while we expect the Mavs to gradually increase Powell's workload, we don't think it will be long before he's playing significant minutes. Powell was a 12th-round value in 9-cat last season and will need some positive regression with his steal/block rates to crack the top-100.
Added 10:38 am (EST)
Added 10:38 am (EST)

J. Brunson - PG
DAL
Jalen Brunson, who had surgery to repair a torn labrum in his right shoulder in March, said he's 100 percent.
Brunson will be ready to roll for camp and there's no report of any restrictions. The Mavs are loaded at guard and run their offense through Luka Doncic, so it's hard to see Brunson making a big impact in fantasy this season. He will compete for minutes with Trey Burke, Tyrell Terry and J.J. Barea.
Added 10:34 am (EST)
Added 10:34 am (EST)

R. Tucker - SG
CLE
The Clippers have signed swingman Rayjon Tucker to an Exhibit 10 deal.
He'll have a chance to not only make the team, but compete for a job, possibly helping Nicolas Batum backing up Kawhi Leonard for the Clippers. Either way, he's not likely to have any fantasy value.
Added Yesterday 11:33 pm (EST)
Added Yesterday 11:33 pm (EST)

R. Tucker - SG
CLE
Shams Charania reports that the Clippers are preparing to sign swingman Rayjon Tucker in the near future.
The team was lacking on wings and Kawhi Leonard was the only small forward on the depth chart, but that's about to change. The Clips signed Nicolas Batum late on Tuesday night and by adding Tucker they will get another wing to help back up Leonard and his load-management plan. Tucker won't have fantasy value, but might be able to help the Clippers at times this season.
Added Yesterday 10:49 pm (EST)
Added Yesterday 10:49 pm (EST)

G. Harris - SG
DEN
Nuggets coach Mike Malone hasn't decided which players will start alongside Jamal Murray and Nikola Jokic.
“Jamal Murray and Nikola Jokic [will start]," Malone said. "After that, I’ll be honest, I can’t sit here today and tell you who our starting two, three and four will be." The contenders for these three positions include Gary Harris, Will Barton, Michael Porter Jr., Paul Millsap and JaMychal Green. Even guard Facundo Campazzo could be an option to start alongside Murray. According to Nuggets writer Kendra Andrews, "The Nuggets wouldn’t mind playing [Campazzo] alongside another point guard." Barton's fantasy outlook is the most stable of the bunch, as he'd be fine as a starter or a sixth man, while a guy like Harris just needs to prove he's healthy (and can stay that way). The Nuggets are a team to watch closely throughout the preseason.
Added Yesterday 9:37 pm (EST)
Added Yesterday 9:37 pm (EST)

J. Noah - C
LAC
The Clippers are waiving center Joakim Noah and he's likely going to retire from basketball.
Noah played 13 seasons, made two All-Star teams and was a defensive beast, but injuries eventually wore him down. Good luck to him and his family in the future. Ivica Zubac and Serge Ibaka will likely split center minutes for the Clippers this season.
Added Yesterday 8:32 pm (EST)
Added Yesterday 8:32 pm (EST)

L. Doncic - PG
DAL
Adrian Wojnarowski tweeted the presumptive Christmas Day schedule on Tuesday and it features the Mavericks at the Lakers at 8 p.m.
In addition to Luka vs. LeBron and Anthony Davis, the schedule also includes the Pelicans @ Heat at noon, The Warriors @ Bucks at 2:30, the Nets @ Celtics at 5 p.m. and the Clippers @ Nuggets at 10:30. We're getting close, folks, and that schedule looks fantastic.
Added Yesterday 8:21 pm (EST)
Added Yesterday 8:21 pm (EST)

N. Batum - SF
CHA
Nicolas Batum has officially signed his contract and joined the Los Angeles Clippers, according to Shams Charania.
Batum was waived by the Hornets, became a free agent and will join the Clippers, where he could be a valuable asset. Yes, he's past his prime but he does a little bit of everything, including playing defense. It's hard to imagine him having fantasy value in standard leagues, but he should be a great locker-room guy, a core defender and a suitable fill-in for Kawhi Leonard when he's on the bench in street clothes and eating popcorn as part of his load management program. But he'll have to shoot it better, as he hit just 35 percent of his shots last season and shot just 29 percent from downtown.
Added Yesterday 7:57 pm (EST)
Added Yesterday 7:57 pm (EST)