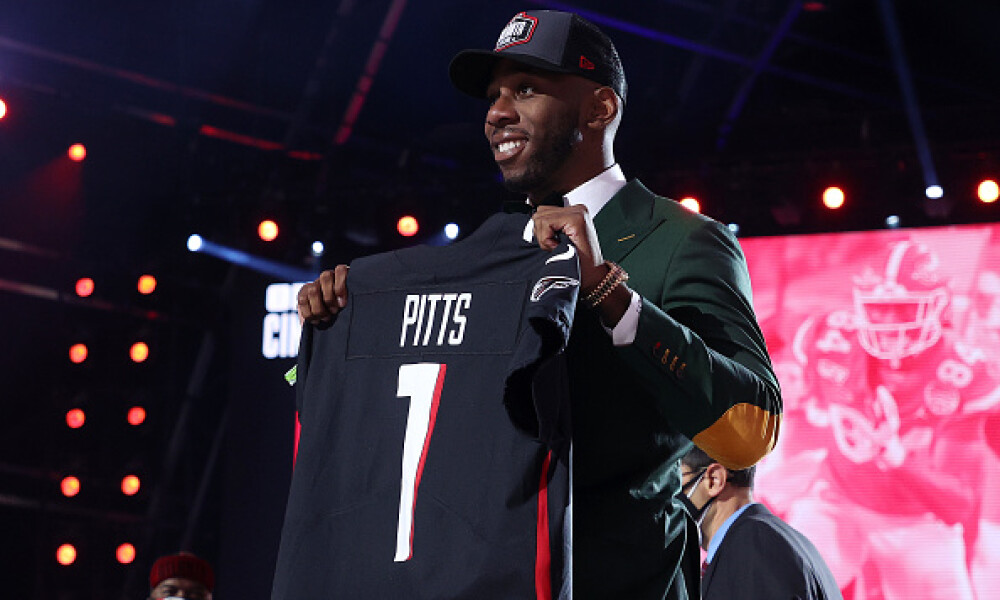 We just explained to you last week why your rookie wide receiver is most likely going to suck in fantasy football as a rookie. Well guess what? That goes double for rookie tight ends. In fact, they might be incredibly talented athletes and not even break out during their entire rookie contracts. Then they will be awesome in fantasy. You want to know why?  Well, pull up a chair and I’ll tell ya.

In the wide receiver article we discussed a very basic yet important rule that can limit young talent from breaking out early. In this week’s rambling diatribe, our discussion will revolve around a single word that is crucial to assessing the tight end position in fantasy. And that word is duality.

One of the biggest mistakes we make in fantasy football - especially dynasty - is treating these fantasy relevant positions as linear depth charts. Now, some positions in the sport do have straight up linear depth charts meaning that you have one starter who plays all the snaps then a backup who plays next to none. For instance, until Bill Belichick somehow finds some flaw in the rules or calculates a mathematical equation that suggests you need both a left footed and right footed guy, you aren’t going to have multiple punters rotating in and out. You also don’t use multiple quarterbacks or, for the most part, rotate offensive lineman. But, much to the dismay of fantasy gamers, some positions in the modern NFL that were previously linear are now treated as a “room”.

Back in the golden era of fantasy football in the early 2000s, you used to have situations like the 2003 Chiefs where Priest Holmes got 394 touches and his backup, Larry Johnson, got 22. And that’s how most teams did it. You have the starter who got all the touches and the backup who quietly rode the pine while they waited for the starter to suffer a debilitating, career ending turf toe injury based on over-usage. Then it was the backup’s turn to be run into the ground. In those days, fantasy drafts were easy since everyone just politely lined up in the first round for their bell cow RB.

With modern running back, everyone now knows that there are only a select few exceptions that still give one guy almost all the touches. And two of the premier ones got hurt pretty much immediately in 2020 (go figure). In today’s age some teams don’t even WANT one top guy. In the modified Erhard Perkins system that Bill Belichick runs, no RB has gotten 200+ carries and 35+ receptions since Robert Edwards and Curtis Martin. And that was in the 90s when Pete Carrol was the Patriots coach. We’ve known some teams use “passing down backs” like this for a while now but some people might not realize that the tight end position for many teams is going the same route. For every guy like Travis Kelce who is THE GUY, you have a situation like the Ravens where Nick Boyle actually plays more snaps than Mark Andrews yet Mark Andrews plays the all important pass catchy ones. And thus where the duality of the position comes into play. To truly be an every down tight end you need to both have the ability and trust to operate in unison with the offensive line as well as the ability and trust to operate in unison with the pass attack. That doesn’t seem like such a big challenge though since most of these guys have played the position their whole lives no?

What happens most of the time with a rookie tight end is they get drafted into a tight end room and then you analyze what the pros and cons are of all the players in that position group. And it’s never as simple as “this guy is the best pass catcher so he just gets all the passes”. Let’s take the 2020 Tennessee Titans as an example. They had Jonnu Smith , MyCole Pruitt , and Anthony Firkser . Let’s say, hypothetically, on a 1-10 scale that I’m just now making up, Jonnu Smith is an 8 as a blocker and a 7 as a pass catcher. Pruitt is a 7 as a blocker and a 2 as a pass catcher. Firkser is a 2 as a blocker and a 6 as a pass catcher. Jonnu Smith is the best at both and he’s your starter. As the season progresses, you all of a sudden hit a patch where Pruitt, left tackle Taylor Lewan , and pass catchers Adam Humphries and Corey Davis are all out. As fantasy gamers, we immediately think “Jonnu Smith is the best pass catcher because he’s a 7 so he is going to get a lot of those vacated targets!” Exciting times. But the reality is that you look around the room and you aren’t going to ask Anthony Firkser to block because he sucks at it. So even though Jonnu is the better pass catcher in a vacuum, Firkser actually moves into the slot and Jonnu gets stuck helping out with the in-line blocking. So it’s actually Anthony Firkser who goes off against the Texans for 8 catches, 113 yards, and a touchdown. See what I mean? Not so simple.

This type of thought process goes on across the league with just about every rookie tight end. The Bears bring in Cole Kmet. You look at that room and you aren’t going to ask Jimmy Graham to block - he’s never blocked a day in his life. So Kmet comes up on the blocking side. Same with Adam Trautman behind Jared Cook and same with Dallas Goedert with Zach Ertz . You want to get them experience so you have them come on as the second tight end in a blocking role. Even if Goedert at this point might actually be BETTER at catching passes than Ertz, Goedert was the #2 overall run blocking tight end in 2019 per PFF. So, if you are going to put one guy in-line and one guy in the slot, who ends up in the slot?  Ertz. Same with Nick Boyle and Mark Andrews . As crazy as it sounds for fantasy, NOT being a good blocking tight end can often be a plus for fantasy value. Chris Herndon played the most tight end snaps on the Jets but Adam Gase had him block on over 25% of the PASS snaps so that was 100+ pass plays that he could have been running routes on instead. Meanwhile here is Logan Thomas trying to block Chase Young in practice. The guy on his back led the league in routes run by a tight end this year.

Here’s where it gets crazy and why tight ends can take even LONGER to break out. Even if you are the best pass catching tight end on the team there is a SECOND BATTLE that needs to be won. This is the battle for targets. The intro section to this article labeled The Target Conundrum breaks the target situation for tight ends down in full detail with charts and all that jazz but the gist of it is that it’s incredibly difficult to have top five upside as a tight end if you aren’t a top two target on your team. It is incredibly rare for teams to have three guys all get 100+ targets and there are few examples of top five tight ends not being a top 2 target on their team. Last year Robert Tonyan managed to do it by scoring 11 touchdowns (and pulling his owners pants down by having one catch in fantasy championship week). The last time it happened before that was Martellus Bennett on the 2014 Bears in one of those rare instances where a team had three guys get 100+ targets. In fact, if you set the bar at either 90+ targets or 10+ touchdowns, the last TE to finish top 5 in PPR without either was Randy McMichael in 2003. So, to have top 5 upside (which in 10-12 man leagues essentially means an above average starting tight end) you need to figure out a path to either targets or touchdowns.

Hence why it’s so rare that we have rookie tight ends that do anything at all in fantasy. You first need to join the team and be the best pass catching tight end on the roster. And then you need to be one of the top two pass catchers on the team. Evan Engram is an example of a guy who is built more like a WR (6’3”, 234, 4.42 forty yard dash) and he just so happened to join a Giants team the year that Odell Beckham Jr. missed 12 games.  So he was a rare rookie tight end that had some success. Rob Gronkowski wasn’t a top target on his team as a rookie but he did happen to be a massive redzone target and score 10 touchdowns. The exceptions to this rule only come via two paths - tons or touchdowns or tons of targets. Double digit touchdowns are hard to project for anyone outside of Travis Kelce so targets are the easier path. There is the rare occasion where a team is top 2-3 in the league in pass attempts with a highly consolidated snap share where they can give three guys 100+ targets (2016 Saints and Ravens, no one in 2017, 2018 Giants, 2019 Panthers, 2020 WFT and Bengals etc.). But you have to remember that you are betting on the unlikely side of the anomaly - less than 5% of teams over the last 5 years have had three guys all have 100+ targets. And, if you were to guess, you probably wouldn’t have guessed that the 2016 Ravens with Mike Wallace , Steve Smith, and Dennis Pitta was one of them.

I’m not going to get into too many specifics on this year’s rookies because this is a concept article - something that you can take and apply your own ideas and projections to. But, when you look at a tight end room like say, the Steelers, who do you think will block more in 2021 - Eric Ebron or Pat Freiermuth?  If Julio Jones doesn’t get traded, which two of Julio Jones , Calvin Ridley , or Kyle Pitts will be the top two target getters on that team?  For a team like the Colts, where Mo Alie-Cox actually blocked MORE than Jack Doyle and Jack Doyle runs an absolutely scorchingly slow 5.0 forty yard dash, what role does Kylen Granson play?  These are the questions you need to be asking yourself before you bank on rookie tight ends for this season. Or maybe we can just ask Colts Director of Player Personnel Kevin Rogers himself what he thinks…