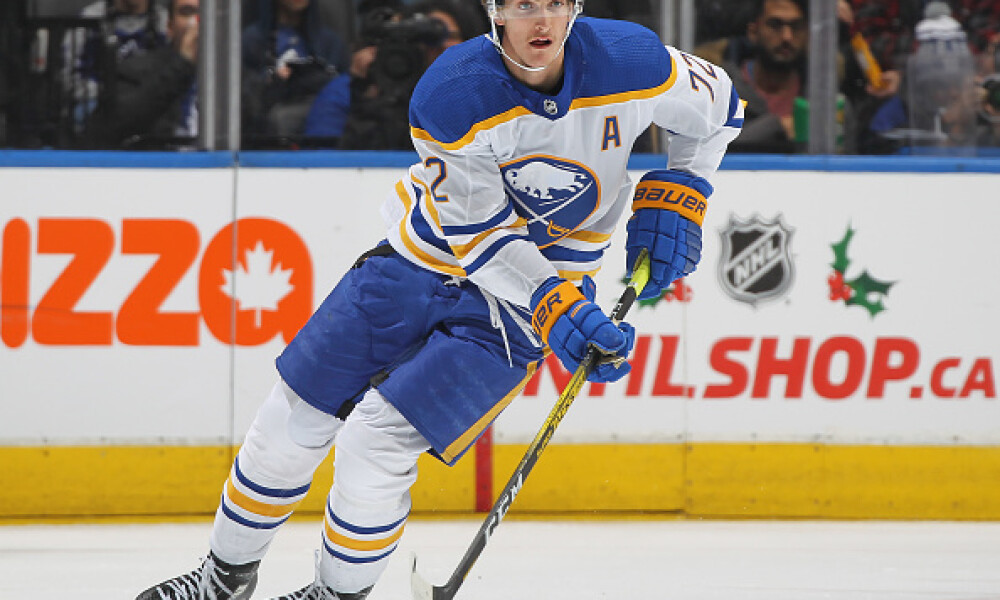 Welcome to the NHL DFS core plays for a Thanksgiving week double header fantasy hockey slate! You will see three tiered options for Yahoo! DFS, DraftKings, and FanDuel every night that there are three or more games. Otherwise, you are still getting the same great top plays and the Discord chat is still open for all of your questions. Don't forget to check out our NHL daily projections, the NHL DFS lineup generator, today's NHL betting odds, and NHL starting lines. Have fun and let's make some money together tonight!

The first of the two games tonight comes in Montreal as the Canadiens take on the Buffalo Sabres! The Sabres are really struggling right now having lost 8 games in a row but that hasn’t stopped some of their players from remaining productive in DFS. Of the top it’ll be Tage Thompson as the top option at center for tonight at 8.3k on DraftKings. Thompson has been amazing this season averaging 17.6 DFS points a game and amassing 22 points on the season. His ceiling is huge, but the floor is also consistent as even when he’s not putting up points he is racking up shots on goal, with 21 over the past 3 games. He will be heavily owned but the best player in the slate. Other options for the Sabres include Jeff Skinner, Alex Tuch, and Dyan Cozens in the forward group. The latter centers on the top power-play unit and is low-priced at 4.3k. Skinner and Tuch play beside Thompson and are both mid-priced players, that have had big games. Of the two I lean Tuch over Skinner for the upside, but both are in play. On defense look at Rasmus Dahlin at 8k, he’s massively expensive but the 17.5 DFS points per game talk. He quarterbacks the powerplay unit and gets a handful of shots on the net every game.

Over to the Habs now are some more affordable options for a team that should score 3 or more goals tonight against Buffalo. Nick Suzuki will be your center at 6.5k as he has 8 points over the last 5 games and runs the top line and first powerplay unit. For special teams' work, Sean Monahan is worth a dart throw too at 3.2k as he’s been at, or over double digit points a lot lately. For wingers, it’s Cole Caulfield as the chalk play at 7.1k on DraftKings. Caulfield is coming off a 3-point game, his best of the season and the Sabres may be very generous this evening. Some pay-down options will include Kirby Dach, who’s on the top line, or Brendan Gallagher who always pops up on the score sheet when you least expect it. On defense fire up Mike Matheson, in his season debut, he netted a goal and a few shots while taking over the point on the top powerplay unit. Joel Edmundson is another good option but more expensive than Matheson right now. Montreal will give me the first option for me goaltender tonight, it looks like it’ll be Jake Allen and while his stats aren’t impressive if he can get the win and stop the flurry of shots Buffalo puts on, he should score well.

Now onto the late-night game on the west coast that should be lower scoring than Montreal and Buffalo. First, with the Rangers, the centers are in good shape with Mika Zibanejad at 8.1k and Vincent Trocheck at 5.8k. Mika has been awesome this season with 21 points so far and will see a ton of ice time, always worth a look. On the wings, it’s the usual take-your-pick between Artemi Panarin and Chris Kreider. They are both close in price, but I lean toward Kreider in a lower-scoring game as he can scratch out productive nights without points thanks to many shots on goal. On the low-priced end, take a look at Jimmy Vesey as he plays with Mika and Kreider on the top forward line. On defense for New York, I see two options, the first is Adam Fox who is still underpriced at 6.7k and holds 21 total points on the season. He has also topped double-digit DFS points in 5 of his last 6 games. Jacob Trouba will be the other choice at 5.4k on DraftKings, he isn’t productive with points, but he does get shots and blocks which pad his stats. In goal, Igor Shesterkin will be in play as always, with a record of 9-2-3 on the season. He should be the most popular option in contests tonight and for good reason.

Over to the home side in Los Angeles now, I will say I don’t love the centers as they have a difficult matchup. If you want to get different Philip Danault is on the ice a lot and is just 4.8k. The wingers will be a much better option this evening as the trio of Gabriel Vilardi, Kevin Fiala and Adrian Kempe have done well this season. They are all on the top powerplay unit as well. Fiala presents the biggest upside for me, and Kempe will be the safe option in this group. On defense, it’s Matt Roy or Drew Doughty for the most production with a slight lean-to Doughty for being on special teams and being cheaper. I will say I am not excited to play either one though. To finish the Kings preview is their goaltender, expected to be Jonathan Quick but that has not been announced yet. If the Kings can win this game, then Quick is a steal but between him and Igor, it’s a toss-up in my head. Quick is the GPP pivot play though tonight for sure.