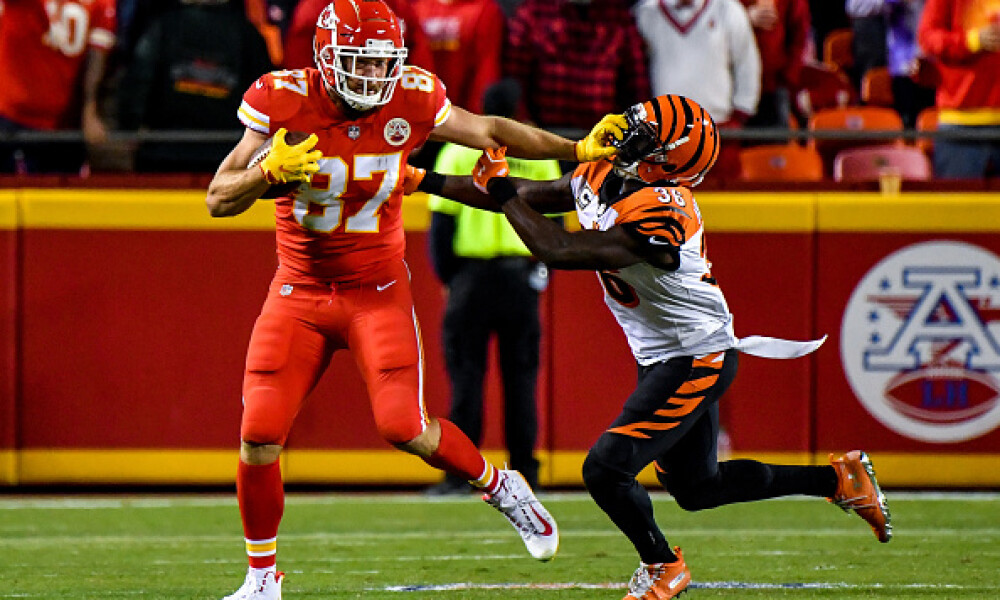 Welcome to the NFL Conference Championship Showdown Slate for the AFC!

We have quite the match-up as the Kansas City Chiefs host their fourth-straight conference championship and look to make their third-straight Super Bowl appearance. Standing in their way are the upstart Cincinnati Bengals, a team rooted in youth and a whole lot of swagger. Quarterback Joe Burrow does not seem to be intimidated by the magnitude of the moment and his leadership and attitude are what makes the Bengals a dangerous team to face.

These teams met in Week 17 with the Bengals actually waging a fierce comeback to win the game 34-31 on a last-second field goal. The Chiefs attacked through the air early and then proceeded to pile on the scoring by way of the ground game, but the Bengals fought back through the air and Burrow found his main target Ja’Marr Chase for three scores to help earn the victory. Expectations are running high for both teams and many believe we will see a track meet cut from the same cloth as the Week 17 game.

Weather: partly cloudy with temperatures in the low-40s and winds blowing WNW at 3 mph

Patrick Mahomes, QB KC – There’s a reason he’s always the most expensive quarterback on any slate he’s on and you don’t have to look any further than the 782 passing yards and 8:1 TD:INT over the two playoff games the Chiefs have played this year. He only threw for 259 yards and two touchdowns during the Week 17 match-up against the Bengals, but we expect a much stronger showing this week, especially if this game turns into the second-half track meet everyone is expecting.

Travis Kelce, TE KC – The Bengals rank 24th in DVOA against the tight end position and they allowed the fifth-most fantasy points per game to tight ends during the season. He only had five grabs for 25 yards and a touchdown the last time he faced the Bengals, but that is sitting in the middle of a five-game stretch in which he has six touchdowns and eight red zone targets. He’s averaged 102 yards and one touchdown per game here in the playoffs and he’ll be leaned on heavily once again.

Joe Burrow, QB CIN – The Chiefs rank 23rd in DVOA against the pass and there is no quarterback more on-fire than Burrow right now. He threw for 446 yards and four touchdowns against the Chiefs during their Week 17 meeting and while he didn’t throw for any touchdowns against the Titans last week, the guy has seven 300-yard games this season and has thrown for at least two touchdowns in 12 games. Going back to his time at LSU, Burrow is built for the big moments and this one will be no different.

Ja’Marr Chase, WR CIN – Everything we expected to see from the Burrow-to-Chase tandem has been on full display over the last five weeks as Chase has racked up four 100-yard efforts and three touchdowns over that span. Now yes, those three scores all came in one game, but that game also happened to be against the Chiefs. He’s seen 45 targets in that span and will be heavily leaned on by Burrow in this match-up. The Chiefs’ defense has had its moments, but they rank 23rd against the pass and 17th against the opposition’s No. 1 receiver for a reason.

Tyreek Hill, WR KC – It had been a tough run for Hill after he tested positive for COVID-19 and his last three regular-season games were less than stellar which is putting it mildly. But he’s built up his stamina here in the playoffs and has 207 yards and two touchdowns off 16 catches over these last two games. We’ll see what the Bengals try to do in an effort to keep Hill in check, but when the game is on the line, Mahomes routinely looks for the speedy wideout downfield.

Tee Higgins, WR CIN – While Higgins took a back seat to Chase the last time the Bengals faced the Chiefs, you cannot ignore the five-game stretch prior where he posted four 100-yard efforts with four touchdowns. He also got banged-up in that game against the Chiefs, missed Week 18 and then struggled in his first game back against the Raider. Last week’s seven catches for 96 yards on nine targets should assuage any concern. If the Bengals are going to win this game, Higgins will need to stay heavily involved.

Joe Mixon, RB CIN – Even though there’s that chance he could be game-flowed right out of carries if the Chiefs go up early, Mixon still offers tremendous opportunities if you’re using him in DFS.  He only had 12 carries for 46 yards the last time these teams played, but he also added seven catches for 40 yards which is obviously big in a full-point PPR format. He might actually make for a solid contrarian play as most expect this game to turn into a second-half track meet, so low-ownership and a potential trip to the end zone for Mixon could be your best friend this week.

Byron Pringle, WR KC – He has clearly jumped over Mecole Hardman as the No. 2 receiver and the guy who sees the third-most targets after Hill and Kelce. He wasn’t used heavily in their first meeting as the Chiefs offense seemingly took their foot off the gas and tried to run the clock out, but he’s averaged five catches per game over the last three and has three touchdowns over his last two games. He won’t post eye-popping numbers ever, but his nine red zone targets over the last six games should tell you all you need to know.

Jerick McKinnon, RB KC – He’ll be pretty chalky after seeing his usage over the last few weeks, but from a pure runner standpoint, there should be concerns. Yes, he excels as a pass-catcher, but when the Chiefs are trying to establish the run early, they’re likely to turn away from a guy who doesn’t exactly excel in yards after contact. If you don’t believe in CEH, then McKinnon should be your guy, but just remember that his ownership rates will be high and he will also be competing for pass-catching work with a returning Darrel Williams.

C.J. Uzomah, TE CIN – The Chiefs rank 18th in DVOA against the tight end position and have allowed an average of 53.2 receiving yards per game over an average of 6.7 passes thrown to them. Uzomah has averaged just under seven targets per game over his last four and has 13 catches for 135 yards and one touchdown during the Bengals playoff run. He’s also got six red zone targets in that span as well, so if you’re looking to pivot off the chalk, he could be a real nice option.

Tyler Boyd, WR CIN – I’m not too bullish on Boyd this week, but you certainly cannot ignore him. Prior to last week’s game, Boyd had touchdowns in four-straight games, including his last game against the Chiefs, but overall, it’s going to be a tight battle between him and slot corner L’Jarius Sneed. He’s a super-contrarian pivot off Chase and Higgins if you’re building multiple lineups.

Darrel Williams, RB KC – He’s been sidelined with turf toe, but all signs point towards Williams playing this week. His presence will likely hurt the production of McKinnon more than that of Edwards-Helaire and, despite his fumble from a couple of weeks ago, he’s still a favorite of Andy Reid and Eric Bienemy. If he starts stealing pass-catching work early, he could surprise a lot of people.

Samaje Perine, RB CIN – The only way you throw the Perine dart is if you think this game turns into a blowout one way or the other. If the Bengals are up huge, they will likely want to preserve Mixon for the Super Bowl. If the Chiefs are up huge, the Bengals will likely turn to Perine in an effort to spare Mixon the wear-and-tear as he heads into the third year of a four-year deal. Perine can catch passes too, so that only boosts the value.

Demarcus Robinson, WR KC – Leave it to Mahomes to find the random guys for the touchdown that leaves all DFS players scratching their heads and wondering why they didn’t play more lineups just to get some variety. The reason I lean Robinson over Hardman is not only because he routinely sees more snaps, but also because Hardman is a poor man’s Tyreek Hill so if Mahomes wants speed downfield, he’ll just use Hill. Robinson could be that surprise dart no one sees coming.