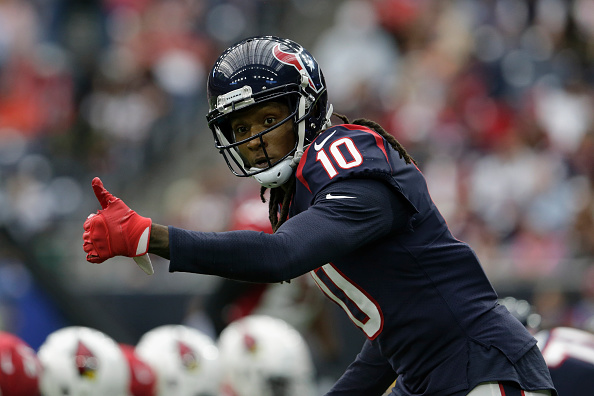 With all sports at a standstill due to the Corona Virus (COVID-19), the NFL has chosen not to delay the start of their season which officially begins Wednesday at 4:00 PM ET. However, teams are not waiting for the bell to ring and we already have two trades announced. The first is an absolute blockbuster deal between the Houston Texans and Arizona Cardinals. The second, though not as big on the marquee, is still likely to be extremely noteworthy heading into the 2020 season.

Let’s take a look at the impact of the two deals, both in reality and fantasy.

What a grab by the Arizona Cardinals who just got Kyler Murray , their young, franchise quarterback, a legit number one wide receiver in DeAndre Hopkins , arguably the best in the NFL. Over the last three seasons, Hopkins is averaging 105 catches for 1,371 yards and 10 touchdowns. Hopkins finished 2019 with 104 catches for 1,165 yards and seven touchdowns over 15 games. For comparison, the top receiver on the Cardinals last season was the ageless Larry Fitzgerald who caught 75 passes for 804 yards and four scores. In terms of offense, both Houston and Arizona are downfield passing attacks so we shouldn’t see Hopkins suffer much from a change in game plan. We should expect him to be a mid-to-late first round pick in fantasy leagues again this season and among the first two receivers taken off the board.

The second part of this trade sees David Johnson heading to the Texans. This is certainly a surprising move as Johnson has not even remotely looked like the same back who exploded onto the scene back in 2016. His 2017 season ended after one game due to injury and then in 2018 the Cardinals offense was so abysmal, he managed just 3.6 yards per carry and 86.7 total yards per game. In 2019 he took yet another step back with a new offense centered around the team’s rookie quarterback. Johnson struggled his way to just 345 yards rushing and 370 yards receiving through 13 games. He eventually lost his starting gig to none other than Kenyan Drake who was acquired from the Dolphins mid-season. The Texans running back situation was in flux all year after Lamar Miller tore his ACL. The team acquired both Carlos Hyde and Duke Johnson and implemented a shared the backfield; Hyde, the featured back rushed for 1,070 yards and six scores. Johnson was the change-of-pace back and totaled 410 yards rushing while adding 44 catches for 410 yards. It is safe to assume, however, that, given the price they paid to acquire David Johnson , the Texans will have him as the every-down back in 2020 and a featured part of all facets of the offensive game plan. Johnson is an elite pass-catcher out of the backfield and behind the right offensive line -- something he did not have in Arizona -- he has a shot to get back to fantasy relevance. Look for him to be an interesting bounce-back pick in what will likely be the end of the second round/early third round of most drafts, especially PPR formats.

Weeks ago, we heard Hayden Hurst requested a trade from the Ravens and just days before the official start of the league-year, it appears he got his wish with the Ravens sending him to the Falcons for a pair of draft picks. The Falcons have had themselves one of the more underrated tight ends in football over the past few seasons in Austin Hooper but he’s leaving via free agency and is expected to sign with the Cleveland Browns come 4pm ET on Wednesday. Hurst is an interesting buy here for the Falcons and could become a popular mid-round tight end selection in fantasy this upcoming season. First, lets examine the departing Hooper’s production over the past few years in this Atlanta offense, shall we? In 2018 Hooper caught 71 passes on 88 targets for 660 yards and four scores. In 2019 we saw an uptick in production despite missing three games due to injury as he caught 75 passes on 97 targets for 787 yards and six scores. It’s clear that Matt Ryan used Hooper as a safety net when the downfield shots to Julio Jones or Calvin Ridley were not there and Hooper thrived in the middle of the field with defenses having to respect the deep ball.  With Hurst he will have a new opportunity to produce after having had the unfortunate position as the Raven’s No.2 tight end with Mark Andrews dominating the targets during his own breakout 2019 season. However, when targeted, Hurst actually caught the football at an impressive rate finishing with 30 catches on 39 targets for 349 yards and two scores. Hurst was part of a three tight end offense in Baltimore which resulted in him seeing only a 44.5% snap count share while Hooper saw 62.4% of the Falcons offensive snaps. So, if we assume Hurst wins the starting tight end job in Atlanta, which he should, then given the trade, I think it is safe to expect Hurst to see more snaps and if he can develop that relationship with Ryan while keeping up that solid catch rate then he should give us solid PPR production out of the tight end position in 2020.