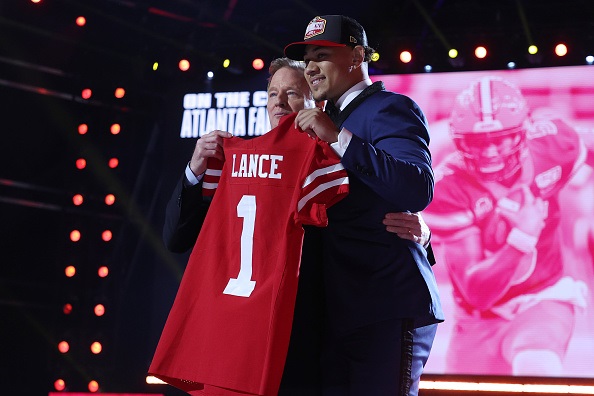 The dust has settled on the NFL draft and we finally have some long-awaited answers for dynasty rookie drafts to begin in earnest. With that comes necessary adjustments to our rookie rankings. The perceived rising/falling value of these players are obviously being gauged on a scale relative to where I had them pre-draft, which factored in inherent talent level needed to potentially overcome any less-than-ideal destination. Najee Harris’ ended up in a perfect spot for him to become a three down back right away, but he was already my RB1 and a lock top five pick in any given rookie draft regardless. The goal here is to highlight some players whose landing spot altered their range of outcomes in rookie drafts.

Outside of just landing spot (projected opportunity/supporting cast), draft capital itself has been statistically proven to be correlated with fantasy success. NFL scouting departments are not beyond reproach, but for whatever reason (more touches, a longer leash, maybe even actual talent level), it is generally a good thing for a player’s chances of success to have been taken higher in the draft. Players outside out of the first 4-5 rounds of the NFL draft rarely become anything noteworthy for fantasy purposes. This is where we need to say goodbye to our pre-draft dynasty darlings who became 7th rounders and UDFA’s. There will be the occasional hit from that group, of course, but we are trying to play the odds here.

The biggest question mark going into draft night was who Kyle Shannahan was going to handpick as his next quarterback at No. 3 overall, and Lance turned out to be his guy all along despite rampant rumors about Mac Jones. I would not expect much out of Lance early in his career, as Jimmy Garoppolo should start most if not all of the 2021 season due to Lance’s raw nature and lack of experience. Long term, however, the match of Shannahan’s offensive mind, the 49ers supporting cast, and Lance’s immense upside as both a runner and a passer should pay major dividends. As we’ve seen with Patrick Mahomes , sitting on the sidelines and learning from a veteran quarterback and offensive genius at head coach for a year can be fruitful. He has jumped just ahead of Justin Fields for me behind Trevor Lawrence in my quarterback rankings. Those three guys form a clear tier for me at the top of SuperFlex rookie drafts. Even in 1QB leagues, this landing spot could garner back end first round draft capital for Lance.

Sermon was part of my second tier of running backs with solid talent but ultimately landing spot dependent. Fortunately for him and his fans in the dynasty community, the 49ers couldn’t have been a better team to go to. After the clear top three running backs went in the first two rounds, Sermon was the only back taken in Round 3, a promising sign as it relates to how NFL scouts view his talent. The San Francisco backfield may seem crowded at the moment, but Raheem Mostert has little guaranteed money left on his deal after this year and Jeff Wilson was a UDFA who, while productive, is not special talent wise. Sermon has limitations in the passing game and is not an elite athlete, but he showed some special qualities this past season as a runner that the 49ers clearly noticed. I don’t think I’d ever feel good about him as the top RB on my dynasty roster, but this certainly gives him the opportunity to live up to his potential as a solid RB2 with touchdown upside. I would slot him in to the mid-2nd round of rookie drafts, but I have a feeling people are going to be reaching for him even higher in a class that offers little outside the top three backs.

Carter was also in my second tier of backs. While his destination may not be to an offense as good as Sermon’s, Carter has less competition in his backfield and a suddenly elite offensive line in front of him. An aging Tevin Coleman is on a one-year low-cost rental deal, Ty Johnson has no guaranteed money on his deal, and La’Mical Perine showed little as a rookie. The Jets took Carter with the second pick of the 4th round, so his draft capital is not bad. Carter’s specialty is as a receiver, and he should step in right away as the Jet’s passing down back with room to grow into a larger role. I have him just behind Sermon and think both slot in as nice mid-second round rookie picks (with a slight value bump for Carter in full-PPR leagues). Like Sermon, just be wary of becoming running back hungry and taking him over some of the wide receivers and even quarterbacks who project as better long-term assets.

Before the NFL draft, I wrote about how Rodgers was a solid prospect but that I had a hard time seeing him ever becoming an alpha NFL wide receiver. Well, in the middle of the 3rd round he ended up landing in one of the few places where a complimentary wideout can produce like a top receiver for fantasy purposes. Aaron Rodgers has supported multiple top 24 wide receivers before, and if Amari manages to win the starting role opposite Davante Adams , it’s not hard to imagine that being within the rookie’s range of outcomes down the line. The issue may be that the elder Rodgers doesn’t end up playing anymore in Green Bay, which is a topic for another article. For now, I’m assuming he will be and that the younger Rodgers, who has elite athletic measurables, has a chance to grow and develop on a depth chart with a host of mediocre options behind Adams. He’s jumped from a 3rd round dynasty rookie value to a late 2nd for me.

Similar to Rodgers, I wrote about St. Brown as a higher floor, lower ceiling prospect. Given his landing spot, he is going to have plenty of opportunity to prove me wrong and achieve some upside. After beefing up the trenches in the first three rounds, the Lions grabbed the USC product in the early 4th. He joins a razor thin receiving core that lost Kenny Golladay to free agency and only signed Tyrell Williams and Breshad Perriman as replacements. While I agree with the narrative that the Detroit offense is going to take a step back going from Matthew Stafford to Jared Goff , I do not think it is the doomsday scenario most are making it out to be, especially with the addition of Penei Sewell to solidify protection and the run game. St. Brown has made essentially the same exact leap as Rodgers for me from a 3rd round dynasty pick to sneaking his way into the back end of the 2nd round. If he fails as a prospect, it won’t be for a lack of target opportunity.

Gainwell was in the same tier as Sermon and Carter for me pre-draft, and still isn’t far off, but it’s tough to justify taking him over either of them given his 5th round draft capital. The landing spot itself is also less than ideal, with Philadelphia having a strong running back room in Miles Sanders, Boston Scott , and Jordan Howard . Sanders and Scott are both adept receivers, which is Gainwell’s strength. Opting out of 2020 clearly hurt his draft stock after his stellar 2019, which is not surprising given the recent reporting on how NFL teams were dinging prospects for that. I still think he is a worthwhile gamble in the early 3rd round of rookie drafts, but he is not the 2nd round lock many (myself included) considered him to be pre-draft. If you are a Sanders owner, he might be a valuable injury insurance policy.

The Packers have heavily invested in the running back position in the last 12 months, drafting A.J. Dillon in the 2nd round last year and then resigning Aaron Jones to a long-term contract extension this offseason. This makes it hard to expect much opportunity for Hill, who the Packers drafted in the back half of the 7th round. He doesn’t offer anything special running the ball that would garner him carries vs. those guys, but he is a decent receiver out of the backfield. In deep PPR leagues, Hill may offer some long-term value if that part of his game can help him gain a passing down role, but given the investment the team has made in Jones and Dillon, I can’t see him being anything more than third on their running back depth chart, maybe even fourth if he’s unable to beat out Dexter Williams . Once a potential 3rd round rookie lottery ticket, I would be searching for upside elsewhere in that range.

My highest overall ranked player on this list, Bateman’s presence here is not an indication that I dislike him as a dynasty prospect. He is still my WR4 in this class, and he got the first round NFL draft capital we were hoping for. However, there clearly was a gap between he and Jaylen Waddle/DeVonta Smith in the eyes of NFL scouts, and he fell on the sword that we all knew was coming for one of these rookie receivers by landing with the Ravens. As a result of his and thus the offense’s style, Lamar Jackson has had by far the fewest targets to wide receivers over the last two seasons. They also have another recent first round receiver pick in Marquise Brown , who granted has underwhelmed but is that the chicken or the egg? Whereas a good landing spot would have had us debating Bateman vs. Waddle/Smith and whoever fell of the three top running backs in the 1.04 to 1.07 range, a tier break has crystallized itself for me between Bateman and those players after the draft. I might even consider Lawrence over him at 1.08. Despite that clear tier break, I would be thrilled to get him in that 1.09-1.10 range.

Sporting multiple seasons with an elite dominator rating in the SEC and a strong athletic profile for his above average size, Williams was one of my favorite potential late round rookie draft steals. My draft capital expectations were modest, I figured 3rd to 5th round range. That’s why it was so disappointing to see a whopping 29 receivers selected ahead of him in the NFL draft before Denver took a chance on him in the 6th round. Not only is the draft capital damning, but Denver has one of the best young receiver cores in the league with Jerry Jeudy, Courland Sutton, and K.J. Hamler to go with Noah Fant. It’s hard to see him getting on the field anytime soon, let alone get any targets. Even with the sharp drop off in talent in the 3rd round of rookie drafts, there are probably better bets than him now in that range. If you have the space on your taxi squad, I would definitely still try to stash him and let him marinate.