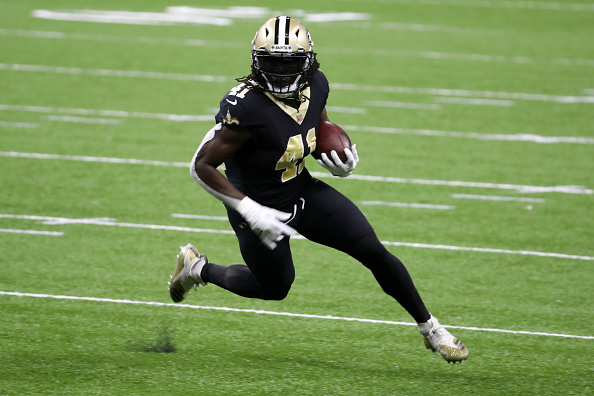 Here’s a breakdown of which players we suggest looking at for tonight:

Drew Brees , NO - Brees will once again be without his top receiving target in Mike Thomas who has been ruled out tonight due to disciplinary issues. This will now be the fourth straight game in which Brees will be without last year's leading receiver. Despite missing Thomas, Brees has still put forth a solid season to this point, completing 71-percent of his passes for 1,006 yards and eight touchdowns.  Brees will have a decent match up tonight against a Chargers defense that ranks 20th in DVOA ranking against the pass this season.

Justin Herbert, LAC - The rookie has been impressive through his three starts, completing over 70-percent of his passes for 935 yards and five touchdowns with  a QB rating of 102.2. The issue for tonight is the lack of Austin Ekeler and how he adapts to not having that type of security blanket. Herbert had relied heavily upon throwing to Keenan Allen and Ekeler over his first two starts but with Ekeler now out he will need to spread the ball around more than we have seen from him this season. Against the pass this season the Saints rank 11th in DVOA ranking.

Alvin Kamara , NO - With Thomas out of the lineup once again Kamara owners should rejoice with the idea that he will once again be heavily targeted in the team's passing attack. On the season he is averaging 8.8 targets per game and that number is only low due to the four targets he saw in Week 4 against the Lions. Those rostering Kamara should expect high usage tonight against this Chargers defense.

Latavius Murray , NO - Murray found the end zone twice in Week 4 and has now seen at least 12 carries in three of the four weeks this season. He has a clear role on this offense and his usage in the red zone is something that fantasy owners need to take note of. With defenses often focusing on where Kamara is when on the field, the fact that the Saints will use both at the same time tends to leave favorable spots for Murray to succeed.

Joshua Kelley, LAC - With Austin Ekeler out, we expect the rookie to pick up some of the slack. After a strong first few games, Kelley has tapered off a bit with his production and things will not get much easier tonight against a Saints defense that has not allowed a 100-yard rusher in nearly three seasons. I expect Kelley to be in a fairly even time share with Justin Jackson .

Justin Jackson , LAC - Jackson was used in the passing game a bit last week following the injury to Austin Ekeler but we have seen enough of Jackson over the past few years to not be overly impressed with his skillset. The fact that he lost his job initially as the back up to Joshua Kelley should also speak volumes about his upside. Not a great match up but if his usage in the passing game increases there could be some value.

Emmanuel Sanders , NO - With Mike Thomas out, many expected Sanders to be the primary beneficiary, however until Week 4, Sanders has been a rather disappointment this season. Week 4 was his first game where he saw greater than five targets and the first time he has gone for more than 60 yards in a game. The Chargers secondary isn't as strong as it could have been due to injuries and maybe what we saw in Week 4 was the breakout Sanders needed in building his chemsitry with Drew Brees .

Tre'Quan Smith , NO - Smith is coming off a two touchdown performance in Week 4 against the Lions and has been a solid receiver for this Saints offense in the absence of Mike Thomas . Smith as some big play upside and this Chargers defense did just allow five touchdowns to Tom Brady in Week 4 so it's possible Smith finds the end zone again in Week 5.

Keenan Allen , LAC - Allen is the league leader in targets per game with 12 and had an astounding 19 targets back in Week 3. It's no secret that rookie Justin Herbert is locked in on his top receiver but this could be a tough match up for Allen tonight if Marshon Lattimore ends up suiting up. If Lattimore is out then Allen should be in for a big night.

Mike Williams , LAC - Mile Williams is looking to make his return to the Chargers lineup tonight after missing last week due to injury. Given the injury to Austin Ekeler there are definitely more targets to go around in this offense with the easy checkdown likely to be used less. Williams has done little since his nine target Week 1 performance that had TyRod Taylor under center but the rookie Herbert has a cannon for an arm and Williams is no stranger to the deep ball.

Jalen Guyton, LAC - Another downfield threat, Guyton had just one catch last week but it was a 72 yard touchdown strike. On the season he has just seven targets so he is not often used but if Herbert takes a few shots down field then Guyton could capitalize.

Jared Cook , NO - After missing Week 4 it is looking like Cook will be active for Monday's game against the Chargers. Cook should figure to be a key part of this team's passing offense but is off to a slow start to the season. In Week 4 the Chargers allowed two touchdowns to the Buccaneers tight ends and the two other pass catching tight ends they faced this season also had solid games with Travis Kelce going for 90 and a score in Week 2 and C.J. Uzomah having four catches for 45 yards in Week 1.

Hunter Henry , LAC - If you want to know where I think the Austin Ekeler check down targets go I would say to take a stab at tight end Hunter Henry . Sure, Henry did not have the greatest Week 4 but he had 15 targets over the prior two games and Week 4 was the only game this season where he has seen less than seven targets in a game. Henry is one of my favorite plays tonight for this reason.