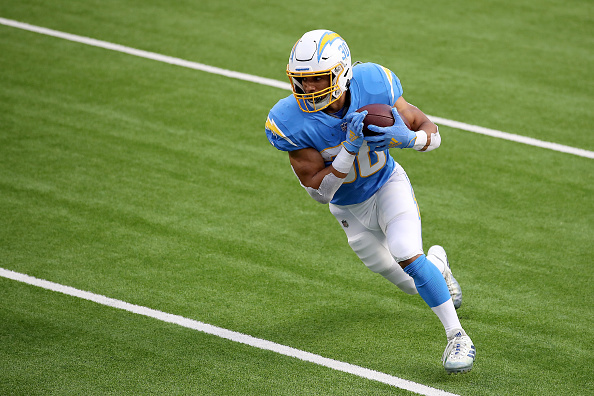 Whether you’re trying to win your season long league’s championship or setting up a DFS lineup, playing fantasy football in Week 17 can be very tricky. Not only are you taking individual player matchups and injuries into account, but you also have to be concerned that some teams might not play all of their top stars. NFL teams that have already clinched a playoff spot might not want to risk having one of their top players getting hurt. Also, while we’d never accuse a team of intentionally tanking a game to have an opportunity to get a higher draft pick, it could happen. In that situation a team might play some of their second stringers, leaving fantasy relevant players on the sidelines.

As this article is being written there aren’t too many injuries to Week 17’s fantasy running backs to be concerned about, but that can quickly change in this crazy season. The Rams’ backfield has been decimated by injuries and there’s a good chance that Malcolm Brown may end up as their lead back this week. Aaron Jones (hip) is another RB who you should be watching carefully. The Packers need a win to try to become the number one seed in the NFC, but with A.J. Dillon’s success last week they may choose to rest Jones in order to ensure that he’s healthy for their entire playoff run.

On the other hand, there are several teams who are playing for their playoff lives this week who can’t afford to rest their star players. The Bills and Steelers each have a shot at clinching the number-two seed in the AFC. Neither team has a fantasy playoff caliber RB that you’d likely start this week.

There are five other AFC teams playing for four playoff spots. The Titans have a chance to win the AFC South. Derrick Henry has a tremendous matchup against the Texans who give up the most fantasy points to RB’s. He’s always an auto start in season long leagues, but if you can afford his salary, get him in your DFS lineups.

If the Dolphins beat the Bills they’re in the playoffs. Myles Gaskin is back and while his 33 PPR fantasy points were on my bench last week, he has a nice matchup against the Bills who’ve given up 4.5 YPC to RB’s this season.

A win clinches a playoff berth for the Ravens, and Gus Edwards and J.K. Dobbins have averaged 14.1 and 13.4 PPR fantasy points per game (FPPG) over the past three weeks.

You’re always starting Nick Chubb and Kareem Hunt anyway, but the Browns make the playoffs if they beat the Steelers.

The Colts need a win and some help to win the AFC South and Jonathan Taylor has been running wild lately. He’s averaging 23.2 PPR FPPG over the past three weeks.

We’ve already talked about the Rams and Packers, but over in the NFC the number one seed, NFC East champion and two Wild Card teams have yet to be decided. The Saints have a chance to be the NFC’s number one seed, and with all the damage Alvin Kamara did last week it’s a good thing he’ll have an extra couple of days to rest up before his Week 17 matchup against the Panthers. He’s got to be tired after scoring those six touchdowns last week!! Pay up for him in DFS. He’ll likely have another huge week against a Panthers team that has given up the second-most receptions to RB’s this season.

The Seahawks should be motivated to play the 49ers this week. They have a chance at becoming the NFC’s number one seed. Chris Carson has scored touchdowns in his last two matchups against the 49ers and has a career 4.63 YPC against them.

The Cowboys, Giants, and the Washington Football team all have a shot at winning the NFC East. Their rivals, the Eagles, will have a say as to who wins the division as well. Other than the Giants, each one of those teams have at least one running back on their roster who can help you in Week 17.

The Bucs have already clinched a playoff berth but if they beat the Falcons they’d be the NFC’s fifth seed and get to play a winnable game against whoever is crowned the NFC East champion. Watch Ronald Jones ’ progress as the week progresses. He has been removed from the reserve/COVID-19 list but his broken finger may limit him a bit this week.

If the Bears beat the Packers they’re in the playoffs. David Montgomery is RB4 in PPR FPPG over the past three weeks. He should be able to feast against a Packers team that has given up the fourth-most FPPG to RB’s this season. Montgomery rushed for 103 yards on 11 carries (9.36 YPC), caught five passes for 40 yards and scored a touchdown in his first meeting against the Pack this season.

Kenyan Drake and the Cardinals should be motivated to play against the depleted Rams this week. If they beat them, the Cardinals are in the playoffs.

Of course, you don’t only have to focus on players on teams that have a shot of either making the playoffs or entering the playoffs as a higher seed. There are running backs on other teams who have an opportunity to have big weeks. For instance, Chargers running back Austin Ekeler is averaging 4.70 YPC and 5.3 catches per game. He takes on a Chiefs team with nothing to play for, and that has given up the sixth-most receptions to RB’s this season. Make sure that he’s active this week, but Vikings running back Dalvin Cook has a juicy matchup against a Lions team that has given up the second most FPPG to RB’s this season.

This is the last full week of the football season. Make it count! If you’re playing for your season long league’s championship, win it! If not, set some winning DFS lineups and put some extra cash in your pocket! Don’t forget to check in with Fantasy Alarm for up-to-the-minute updates on all the information you’ll need to have a successful Week 17. Good luck!