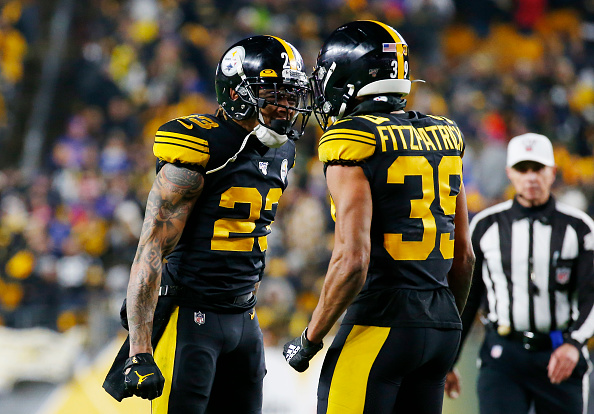 It bears repeating: If you are in a position to vie for a fantasy football championship, now is the time to shore up your IDP rosters with rising players that can replace those defensive options that are underperforming or have hit the IR for short or long-term stints. Below are some options in all three of the primary position categories, including one defensive tackle for those who play in mandatory DT leagues.

Even playing just under 50% of the snaps on defense, Harrison collected double digit tackles last week against the host Colts: 11 total tackles (TT), six solo (his numbers were improved by the five tackles he grabbed on special teams, to be fair). Taking on the Patriots in Week 10 is a good matchup for continued tackle production.

Marcus Golden ARI (Note: He only qualifies as a DE in ESPN leagues)

The Cardinals traded for Golden to shore up their defense after losing Chandler Jones for the season, and he responded after clearing the COVID protocols: five TT (two solo) with one of those for a loss of yards (TFL). He added a sack, a pass deflection (PD) and a QB hit/hurry (QH) to make him a big play performer.

Klein is another LB who had the opportunity to shine due to a teammate hitting the IR, in this case Matt Milano . He had a pair of sacks against the Seahawks at home, as well as forcing and recovering a fumble (FF & FR),  and producing four QHs and a PD. Toss in five solo tackles (one TFL) and he put up a full stat sheet for the owners that stuck with him while he was languishing in terms of value offered the prior few weeks.

He collected a pair of sacks and a couple of QH in Tampa Bay against the struggling Tom Brady in Week 9, to go with three TT (two solo, two TFL). He now has accumulated 7.5 sacks on the season, making him a major source of big play potential this year. This week’s matchup against the 49er offense is just so-so, but then in Week 11 the Falcons come calling with their second rated offense in terms of fantasy points allowed to opposing DEs.

Barrett is not a full-time defensive linesman in Philly, but the matchup against the Giants in Week 10 is superb. He has collected 3.5 sacks through seven games played this season, and he snagged one of those against the Giants back in Week 7.

Another Eagle defensive linesman piques our interest, with his big-time tackle production over the past three games: 14 TT (10 solo). He has wrapped up opposing signal callers for four sacks over that period, as well, and has accumulated seven total sacks in 2020 to date. Again, great matchup in Week 10 against the Giants on tap.

The lone DT this week, he snagged another four TT in Week 9 (same as Week 8, but this week reversed the solo/assist numbers with three solos) and has been seeing a uptick in playing time (PT). The rookie is beginning to settle in, and is a valuable low-owned option for DT-mandatory schemes.

The rookie safety has played in each of the team’s contests but with Landon Collins hitting the IR, he saw a huge increase in PT last week. He responded with a superb stat line: 11 TT (six solo, one TFL), two QH and a sack of Daniel Jones. With an role opening up for him, look for continued improved production, as Washington gets two decent matchups (Detroit and Cincinnati) before a great Week 12 opportunity against the host Cowboys.

The Steelers saw somethings they liked that led them to snatch Fitz from the Dolphins, and he was a force on defense against the host Cowboys last week, with six TT (five solo), an INT, a FR and a pair of PDs. The next three weeks have decent if not tremendously highly ranked matchups on the horizon with the Bengals, Jags and Ravens, but his ball-hawking skills make him a low-percentage owned DB to target.

Trufant is finally able to land on the playing field as he overcomes the early season injuries that limited his PT, and he is showing just why the Lions targeted him this past offseason. He contributed six TT (four solo, one TFL) against the host Vikings in Week 9, adding a sack, QH and PD to make him valuable in both tackle-heavy and big play leagues.

Our final entry in the rising player group this article is one that has jumped into consideration due to lack of depth at the corner position in Tennessee. He played every snap in Week 9’s contest against the visiting Bears, collecting nine TT (seven solo) with a PD added for the cherry on top of the dessert. Despite lackluster matchups on the schedule, every down DBs have value, especially those who are going to be tested due to inexperience at the NFL level.

Quinn was brought in to be a dominant sack and tackle provider by Chicago, but he has been anything but, with just nine TT on the season (six solo) and a single sack. It is unlikely he is still clogging up an IDP roster at this point, but he should be dropped for a more productive option ASAP.

A huge goose egg in the tackle column after Week 9 is a sign of what he has been providing his owners this season, albeit one that is worse than prior weeks. He has not contributed a sack since tallying a half sack in Week 4, and while he has had the occasional multi-tackle week this season, the production is far too erratic to trust at this important juncture of the fantasy season.

Jordan is no longer the sack-master he has been over the past three seasons, with just 2.5 on the 2020 campaign. He put up a zero tackle effort this past week against the Buccaneers who provided plenty of opportunities to hit and harass Tom Brady . He was likely drafted with the expectation that the sack numbers would continue to be high-level, and without that aspect to his game in evidence, he can be cut loose.

Neal becomes expendable with the return of Jamal Adams to the Seahawk defense. He had a mere three snaps on defense this past game, and thus ended up with no tackles to his credit. It was fun for him while it lasted, but that has dried up now.

Shutdown corners are fine options for their football teams, but for fantasy purposes, they have little to no value. Teams are making a point of avoiding the Giant cornerback, as evidenced by the single target he saw in Week 9 in our nation’s capital. If the action is directed elsewhere, he will continue to be a fantasy liability.

As with the player profiled above, Hayward is a shutdown-type corner and has collected just 15 TT after exploding for 12 solos in the opening game this season, over the next seven tilts. That should continue to be his modus operandi as the season progresses, making him next to useless for IDP purposes.

Remember, the first team listed is the one to use your IDPs against. Do not go crazy, and play a LB5 against Washington, but certainly you will do well if you own a top LB on either the Saints or 49ers, or a top DE in the Philly/Giant game that you can plug in this week, for the most part.