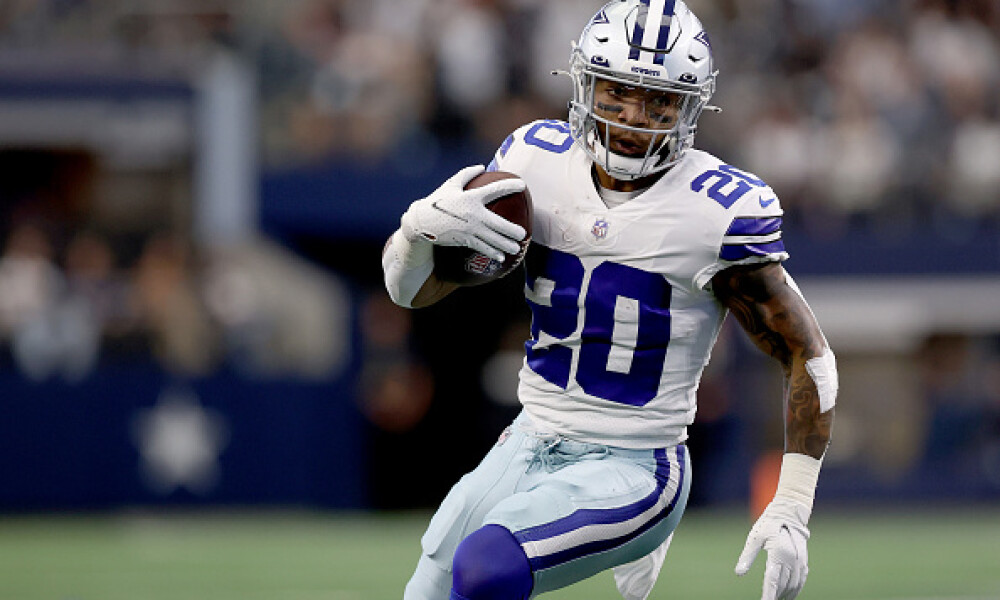 Fantasy Football Running Back Sleepers for 2022

We all love the running back position in fantasy football.

Actually, let me rephrase that: MOST of us love the running back position.

We know the NFL as a whole hasn’t valued the position for a number of years as running backs are among the least paid positions in football when it comes to average annual value per season.

In fantasy football, you can argue that the running back position is one of the most, if not THE most vital positions to get right in fantasy football. So whether you’re drafting your stud running back in the first round, your mid-round sleepers, the late-round guys that could make their way into the starting lineup, or even the waiver wire darlings that end up being a pivotal cog on your roster, we NEED to get it right.

How do we construct a running back room in fantasy? It sounds too easy — grab your fantasy football rankings and grab the highest-ranked players on the board and let the cash flow in.

It’s not as simple as that, but we want to be forward-thinking here at Fantasy Alarm. It’s not that difficult to list off the top names while saying, “well, Kevin has Najee Harris at RB4 but Derrick Henry at RB5, so Harris > Henry for 2022!” and be done with it.

That adds no context. It’s like a coloring book with just the outline. We know what the picture is supposed to be, but we want to add colors to the page. Certain colors are better for certain pictures. We don’t want to take black and blue crayons to color everything on the picture and then call it done.

The Running Back Archetypes

With running backs, there are a few archetypes we can sort these players into.

Of course, the “bell cow” or “three-down” backs are a couple more archetypes, but with running backs this late, you won’t find many three-down backs here, if at all. So let’s dive into each archetype and some backs that fit within these molds.

This one is pretty easy. These running backs have either insulated third-down roles in their offenses or are situational pass-catching backs behind others in their offenses. The most productive example has to be James White in 2018 and 2019, where he finished as RB7 and RB18 despite only 161 combined rushing attempts in those seasons. He also had as many receptions as rushing attempts, with 159.

Recently, J.D. McKissic led all running backs in targets in 2020 with 110 and finished as RB17. These examples may vary by year certainly, but these backs took advantage of deficiencies within their offense and a quarterback that wasn’t afraid to dump off passes. White led the 2018 Patriots in targets and was second in receiving yards, thanks to injuries to Rob Gronkowski and Julian Edelman. McKissic had a better offensive environment around him thanks to Terry McLaurin and the emergence of Logan Thomas, but quarterback Alex Smith was notorious in his career for dumping off short passes to the running back position.

These backs tend to go lower than the typical late-round running back because they tend to be low-ceiling/high-floor options in fantasy. They rarely have the contingent value to where if the running back ahead of them gets hurt, they won’t be the next in line for carries. Still, they’re incredibly useful, especially in full-PPR formats.

Nyheim Hines is a player who has PPR upside as a pass-catcher but may have more contingent value than we realize. His role with Indianapolis could include slot work, as suggested by Colts head coach Frank Reich.

Reich has already admitted that he was too heavy towards the run with the play calling last season and the Colts’ fifth-highest rush rate in 2021 shows that. With Matt Ryan in tow and his propensity to pass the ball to his running backs and increased use of the passing game, Hines could be in for a productive season and pay off a late-round average draft position.

Most of the running backs we’ll be listing have contingent value. You can call them the “handcuffs” too, but contingent value fits them better. It means that their value increasing is contingent on something happening in the offense to benefit them. Usually, an injury to the player above them puts the contingent back in an excellent spot for sustained fantasy production.

One of the best examples of contingent value is Mike Davis in 2020 for the Carolina Panthers. Davis was a league-winning running back who was THE guy behind Christian McCaffrey, who only played three games in 2020. That string of injuries by McCaffrey opened the door for Davis as he finished as fantasy’s RB12 in PPR.

Last season, backs like Rashaad Penny, Sony Michel, Justin Jackson, Khalil Herbert, Alexander Mattison, and Devin Singletary all provided huge contingent value to fantasy managers with Singletary, Penny, Jackson, and Michel providing that value when it mattered the most — the fantasy football playoffs. All four of those league-winning backs were top-six running backs in PPR from Weeks 15 through 17 and were mainstays in fantasy lineups for playoff runs.

For 2022, there isn’t a running back I’d rather have in the late-rounds than Alexander Mattison. Mattison has shown a ton of contingent value as the primary backup behind Dalvin Cook, who hasn’t been the healthiest running back over the past few seasons.

In all four games that Mattison started last season, he has at least a touchdown or at least 150 combined yards. Add in the fact that Cook may face a suspension based on off-field transgressions, and Mattison may be in line to give you stretches of RB1 production in addition to the contingent value he receives from backing up Cook. I’m on board.

The name says it all, but there are also a lot of factors to dive into regarding this tier. There are so many backfields in the NFL that we literally have no idea how they will shake out from a workload standpoint. For example, Denver brought back Melvin Gordon to pair with Javonte Williams. We love Williams as a pure talent, but how much work will Gordon get per game next to him? Will Gordon be usable in fantasy football? Here are some other examples of the ambiguous backfield:

With so many ambiguous backfields in the NFL — plus some that aren’t listed — it creates average draft position (ADP) values you wouldn’t otherwise have if the backfield’s workload split was known ahead of time.

If we knew last season that James Conner would get every red-zone and green-zone (inside the five-yard line) touch known to man for the Cardinals last season, his ADP would have been much higher than the 10th round.

Tampa’s backfield heading into drafts with Leonard Fournette and Ronald Jones close to the same ADP in the 10th round was fruitful for those who chose Fournette as he was the RB3 in fantasy points per game (FPPG) while Jones laid dormant in the Bruce Arians doghouse for most of 2021.

These backfields require you to be correct with your pick, but we typically see a ton of top-level running backs for fantasy come from the middle rounds in ambiguous backfields. At worst, you’re getting a piece of the offense that’s very much involved. Unless you drafted Zack Moss last season. My deepest sympathies.

2022 will likely be no different for these ambiguous backfields.

Damien Harris seems to be undervalued in the eyes of consensus and fantasy experts, but make no mistake — Harris will get every opportunity to eat in a very productive Patriots offense that looks to improve with second-year quarterback Mac Jones at the helm.

Only Jonathan Taylor had as many green-zone touches as Harris did last season and while Harris doesn’t provide the receiving floor, he’s been efficient and has gotten the opportunity but needs to put it all together. The safer contingency play in New England, if something happens to Rhamondre Stevenson, this backfield belongs to Harris — PFF’s highest-graded running back over the last two NFL seasons.

This tier could be a sub-tier, but it’s certainly worth mentioning here. There aren’t many running backs in this tier that you can feel comfortable plugging into your lineups for redraft and managed leagues where you set your lineups.

Backs typically enter this tier once they’ve shown that they can’t be taken off the field by teams because of production they’ve shown, high draft capital necessitating their inclusion on the field with carriers and/or targets, or because of target capabilities on third-down or featured pass-catching roles. The average value of a target (1.57 PPR points) is higher than a rushing attempt (.60 PPR points), so naturally, that is why we want running backs who have receiving chops or the three-down backs in the first round of fantasy football drafts. The receiving element is paramount towards scoring the most fantasy points. So in the end, that’s what we want, right?

Andrew Cooper is going to kill me. Not literally, of course.

I’m a massive supporter of Tony Pollard from an efficiency standpoint. While you can make the case that Ezekiel Elliott’s heavy workload over his career may be catching up with him (22 touches per game in his career), Pollard was the more efficient and dynamic running back in Dallas in 2021.

Dallas is starting to see that as well, as Pollard saw career-highs in utilization last season and was first among running backs in yards per route run and fourth in yards after contact per attempt (both from PFF). Pollard should get more opportunity this season and if something happens to Elliott, he has the contingent value on par with Alexander Mattison, where he’d be in the RB1 conversation every week.

Many of these backs fit into multiple of these tiers, making it incredibly useful to find what you need out of a particular running back group. Suppose you’re drafting players like Alvin Kamara or Dalvin Cook and may potentially need a back to help you along during a potential suspension. In that case, it may make sense to take a running back or two from the standalone backs like Melvin Gordon or wait for a PPR back like Nyheim Hines.

Did you draft an elite quarterback, an elite tight end and a bunch of wide receivers? Drafting a mix of all four tiers with various upside might be the way to go.

I’ve taken a large section of late-round running backs and put them into archetypes in a graphic below. Of course, a lot can change between now and Week 1, but this should give you a bit of insight into not just drafting the top running back in the queue, but making sure you know what you’re getting with drafting a running back.