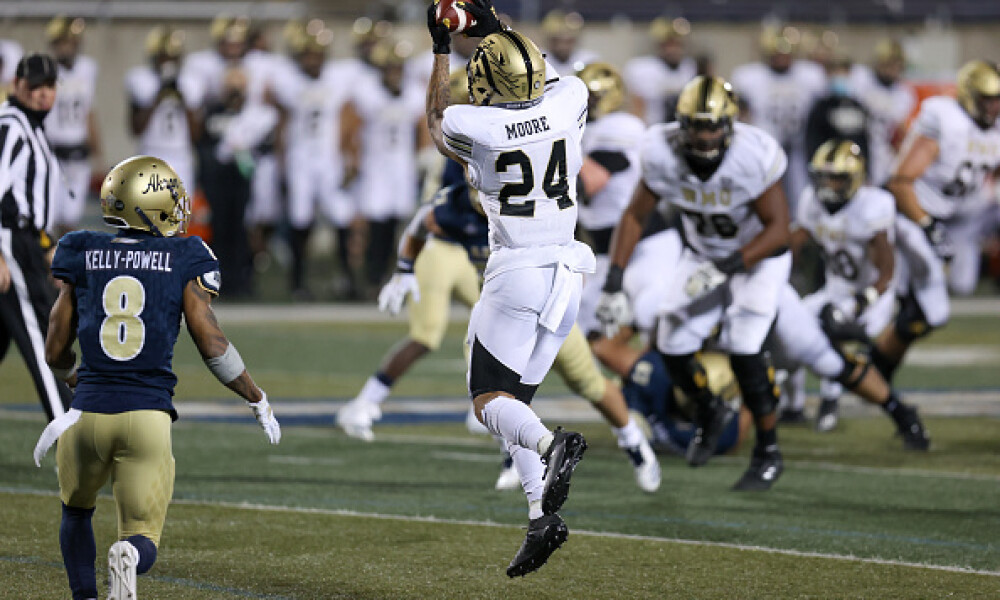 We all had our favorite rookies during the pre-2022 NFL draft process. In our minds, we just knew the Kansas City Chiefs or Green Bay Packers would trade up in the first round so that Patrick Mahomes or Aaron Rodgers could hand-pick the replacements for Tyreek Hill or Davante Adams. Alas, the 2022 NFL Draft happened, and our handpicked players didn’t end up where they could immediately produce in a fantasy football sense. We have some good players with great draft capital and a mediocre quarterback like Drake London, exciting players with bad draft capital and a questionable landing spot like Malik Willis, and productive players with good draft capital and scary injuries like Jameson Williams. We even had players go undrafted and end up signing in undrafted free agency like Justyn Ross. It’s all over the map for our dynasty, best ball, and redraft rankings.

However, sometimes in fantasy football, these players shoot up our fantasy football rookie rankings due to their landing spot, injuries, their own improvement, or a little combination of everything. Amon-Ra St. Brown is probably the most recent example of this. He was drafted in the fourth round of the NFL Draft, and, although he had a slow start to the season, he still ended the year as WR24 in PPR leagues, ahead of “studs” like Amari Cooper, Adam Thielen, and fellow rookie first-rounder DeVonta Smith. We all know people are targeting Breece Hall, Treylon Burks, and Kenny Pickett, but who could be this year’s late-round rookie sleeper? I’ll take you through some players to target in the late rounds of your fantasy football drafts for the upcoming 2022 fantasy football season to help you get ahead of your competition!

In this quarterback draft class, I’m not sure as anyone can be described as a “sleeper,” as only one quarterback went directly into a potential starting situation, but Desmond Ridder has the second-best chance of any rookie in this class to eventually win a starting job in 2022. The Falcons didn’t do much in the way of free agency to improve their quarterback room after trading Matt Ryan to the Colts, opting instead for two-year backup Marcus Mariota as their starter ahead of Josh Rosen and Feleipe Franks. Mariota has the college pedigree of a starter, but that never materialized into success at the pro level. His best quarterback rating came in his second season in the NFL; that rating? 59.1.

Ridder, on the other hand, wasn’t the college darling until his senior year, becoming the first AAC quarterback to lead his team to a playoff berth. He made consistent improvements from year-to-year, and ended the 2021 season with a 108.9 passer rating, up from 82.5 in 2019. Ridder is a quick processor, playing at the speed of an NFL quarterback, and although he did have some problems with accuracy, the work ethic that led to his year-to-year improvement can make one think he will continue to improve under pro-level coaches. It’s likely that Ridder overtakes Mariota as the starter sooner rather than later this season, and although you likely won’t need him in a redraft league, he’s someone to keep your eye on in dynasty leagues.

To the dismay of much of the Packers’ fanbase, Green Bay neglected to draft a potential replacement for Davante Adams in the first round of the NFL Draft. Fans didn’t have to wait long on day two though, as the Packers traded up to get North Dakota State’s Christian Watson with the 34th overall pick. During his four active seasons at NDSU, Watson caught 104 passes for 2,140 yards and 14 touchdowns, and while that may not seem like a great stat-line over four seasons, he was only targeted 120 times over that span in NDSU’s run-heavy offense and with sub-par quarterback play. He has the ability to stretch the field and absolutely torch opposing cornerbacks, as he showed during his highlight-reel-worthy performance at the 2021 Senior Bowl.

Green Bay’s wide receiver corps currently consists of Allen Lazard, the aging Randall Cobb and Sammy Watkins, and fellow rookie receiver Romeo Doubs. Watson has more speed and explosiveness than anyone else on this roster, running a 4.36 40 at the combine, even with his 6’4” frame. If he and Aaron Rodgers can develop a connection, Watson looks to be Green Bay’s WR1 sooner rather than later, and he’s currently being drafted at 202.1 on Underdog and 211 on Best Ball 10s. For a potential WR1, that’s highway robbery. It’s likely Watson creeps up as the pre-season hype builds, but he should still be available for reasonable value by the time redraft leagues get started. Keep Watson high on your radar of potential late-round sleepers.

I’m not going to sugarcoat it; David Bell’s performance at the combine was AWFUL, leading many to question his ability as an NFL wide receiver. However, Bell’s film and performance at Purdue speaks to a stronger skill-set than we saw during the t-shirt and shorts Olympics. In his three seasons with the Boilermakers, Bell set a school record of 17 games with over 100 receiving yards, and in 2021, he had two games of over 200 yards against fellow Big Ten opponents.

The Cleveland Browns have a new look on their offense this season, adding Deshaun Watson and Amari Cooper to their ranks, but they also lost most of their veteran pass-catchers in Jarvis Landry, Rashard Higgins, and Austin Hooper along with losing Odell Beckham midway through the 2021 season. The loss of these players adds up to 229 vacated targets, and while Cooper and Donovan Peoples-Jones can absorb some on the outside, Bell should be in line for a healthy dose of targets in the slot. As an added bonus to Bell’s chance of success, Browns head coach Kevin Stefanski helped develop one of the league’s best slot receivers, Adam Thielen, while he was in Minnesota. Bell is currently going at 234 overall on Best Ball 10s, but the shift has already begun on Underdog, as he’s up to 138.

After the Chiefs traded Tyreek Hill to the Dolphins, many fans thought the Chiefs would use one of their first-round picks to trade up for one of the top receiver prospects in this draft class. They didn’t, instead opting to draft Western Michigan’s Skyy Moore with the 54th overall pick. During his final season in Kalamazoo, Moore had 94 receptions and ten touchdowns, and he was named a first-team All-MAC selection two of his three seasons. He’s been praised for his route-running ability, even earning comps to, you guessed it, Tyreek Hill.

While the Chiefs picked up JuJu Smith-Schuster and Marques Valdez-Scantling in free agency, they also lost Byron Pringle and Demarcus Robinson and don’t seem committed to Mecole Hardman as their WR1. Moore could be a bona fide replacement for Hill in this new-look offense. He’s currently going as the last of the Moore wide receivers in best ball, going at 210 overall in Best Ball 10s and 198 in Underdog. Get him at the discounted ADP in best ball and dynasty leagues while you can because once training camp starts, the hype train may be impossible to stop.

Tyler Allgeier wasn’t selected until the fifth round of the NFL Draft, but that doesn’t mean he won’t have legitimate fantasy football appeal in 2022. In his final two seasons at BYU, Allgeier ranked second in the nation in rushing yards, first in yards after contact, and fourth in missed tackles forced. He has the size of a prototypical NFL running back with his 5’11”, 211-pound frame, and he also landed in an excellent situation despite his draft capital.

The Falcons released Mike Davis two days after the draft, leaving Damien Williams and Cordarrelle Patterson as the only two running backs on the Falcons’ depth chart. Patterson is 31, and it’s hard to see him having a role as an every-down back, despite his success in the passing game last season. Damien Williams isn’t far behind at age 30, so Allgeier could have an immediate role in redraft leagues as a handcuff or goal-line back. He’s being drafted at an ADP of 238 on Best Ball 10s and 186 on Underdog. Unless they add more depth in the offseason, Allgeier could be this season’s best bargain in redraft leagues.

While he was never given the opportunity to be the bell-cow back at Florida, Dameon Pierce has the size and quickness to succeed in a workhorse role at the NFL level. He has the strength and build at 215 pounds to be a bruiser, but he’s incredibly elusive for that size. In 2021, he was third in college football in missed tackles forced per attempt with 39 on 100 rushes.

The Houston Texans signed Marlon Mack and Dare Ogunbowale in free agency while holding on to Rex Burkhead, but it still remains to be seen how Mack can handle a full workload after suffering an Achilles injury at the beginning of the 2020 season. Pierce could become the feature back on this offense sooner rather than later; he just has to prove he can handle a full workload. He’s currently going at 224 on Underdog drafts and 215 on Best Ball 10s, so you should have the opportunity to draft a potential bell-cow back in the last rounds of your redraft leagues.

We’re going with a real deep track here, but hear me out. The Jaguars offered a decent amount of draft capital to trade up for Snoop Conner in the fifth round, and GM Trent Baalke made it clear that they specifically wanted him. While at Ole Miss, Conner played in a rotational role, but he still put up decent numbers, accumulating just under 1,600 rushing yards (5.2 yards per attempt), 26 touchdowns, and another 225 yards receiving. These numbers could have arguably been higher, had Ole Miss not utilized so many RPO plays with quarterback Matt Corral.

The Jaguars have problems in their running back room due to injuries, with former first-round pick Travis Etienne still healing from a Lisfranc injury and no real timetable for James Robinson to return from a late-season Achilles rupture. That leaves Conner and Ryquell Armstead as the only two healthy running backs on the depth chart. Watch to see what he does in training camp and preseason, but he could be an asset early and often in redraft leagues if he catches on to the Jaguars’ system. I’m not saying he’s going to burst on the fantasy scene like James Robinson in 2020, but he may be worthy of a late-round flier just in case he does.

It’s difficult to find sleepers at the tight end position, as it’s usually Travis Kelce/Mark Andrews then everyone else, but I think Jelani Woods has the potential to be an impact player in 2022. Woods has an interesting college journey, but he’s better than his career stat-line suggests. After being recruited as a top-25 quarterback by Oklahoma State, he switched to tight end, which makes sense with his frame. However, the Cowboys used him in a blocking role, leading him to transfer to Virginia where he thrived as a pass-catcher. He earned first-team ACC honors with 44 receptions for 598 yards and eight touchdowns in just ten starts in 2021.

The Colts lost Jack Doyle to retirement in the offseason, leaving Mo Alie-Cox and Kylen Granson as the only other tight ends on the depth chart. After drafting him as the second tight end off the board, the Colts clearly saw something they liked in him, and with Matt Ryan now under center, it is possible they are trying to find someone to fit in the Kyle Pitts role for him. If he is used in a pass-catching role rather than a blocking role, Woods is going to be a darling waiver wire pickup in redraft leagues. Why not go ahead and lock him up on your roster?

I hope this helps you sift through the sleeper possibilities for your 2022 fantasy leagues. Be sure to follow me on Twitter @Britt_Flinn for more takes and fun facts.