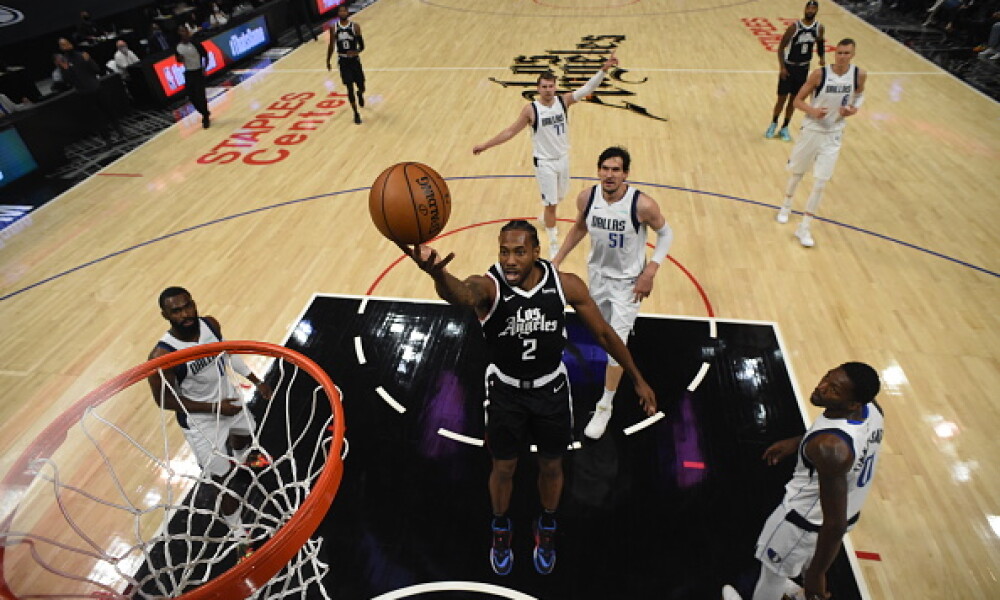 Outside of Game 4, it’s been remarkable to see the things Luka Doncic is doing out there. He’s doing it against two of the better perimeter defenders in the league in Kawhi Leonard and Paul George ! Doncic has scored 31+ actual points in four-of-five games and since Game 1, he’s put up 39+ in three-of-four. He also contributes across the board in all other categories and there’s a reason why he’s put up 70+ DKP three times in this series. He’s the top CPT option. Period.

If for some reason you are fading Luka Doncic in the CPT spot, I give you Kawhi Leonard , who’s been tremendous this series with the exception of Game 5. He shot 7-of-19 from the floor and put up just 37 DKP, the first time he put up less than 55 in this series. The multiple time champion is going to be out for blood in this spot considering his team is facing elimination. I could see a similar performance to what we got in Game 2 here.

You really do hate money if you don’t want 1.5X Doncic or Leonard’s points, but going a different direction here with my third option as captain. You might not be able to fit both Doncic and Leonard if you use one of them at captain, so going Morris allows for that to happen. Ivica Zubac has been more of a liability than Petey from Remember the Titans, so the Clippers have been going small, using Morris at center a lot the last two games. He responded with seven and eight rebounds and even put up 16 points and 37 DKP in Game 5.

I love PG13, it’s just going to be hard to get him to fit in our SD lineups. If you do, you’re absolutely risking not having Luka Doncic or Kawhi Leonard in your lineups. If you’re fine with that, it’s not the worst approach, it’s just something you should look at logically. In four-of-five games, both of those guys have put up 55+ DKP. George has hit that mark just once. He just doesn’t have the upside they have. He has a very safe floor, but not the same upside.

Look at all the games THJ has played well in. There have been three of them in this series. Dallas has won all three. Hardaway has hit three or more three’s in four-of-five games, really stretching the floor for Dallas, allowing Doncic to penetrate at will. If you believe in Dallas winning this game, Hardaway will be a huge reason as to why.

Jackson has been great for the Clippers this series. After only playing 21 minutes in Game 1, Jackson has played 29+ in each game since and has put up 15+ actual and 25+ DKP including series highs of 20 points and 29.5 DKP in Game 5. He’s getting BETTER as the series rolls on. With so much attention being given to Leonard and George, Jackson is a strong option in the mid-tier.

With the Clippers going small, Batum has been able to stay on the floor and play a pivotal role. He’s played 33 and 36 minutes the last two games and has put up 23+ DKP in each contest. At his price, that’s a SOLID return. Nothing should change in terms of his role here, especially considering how bad Ivica Zubac has been.

Here’s everyone’s chalk play to make sure they afford two or three of the top dawgs. Marjanovic started and played 20 minutes in Game 5. He put up nine points and seven rebounds and that is on the low end of production we usually get out of him. Marjanovic has notched a 23.6% USG rate and 1.23 FP/min this season.

It’s interesting we saw Kleber play just 19 minutes and Powell’s minutes spike to 20 in Game 5. Kleber might not be as healthy as we thought he was and the 30+ minutes he was playing earlier in this series could have worn him down. Powell looked sharp while on the floor and he can stretch the defense a bit. He showed he can score & rebound and at 2.8K, he’s worth taking a shot on, maybe as a pivot from Marjanovic OR pair them together as a way to get all the studs you want.