MLB Streaks & Trends: Jeff McNeil Turning It On in August 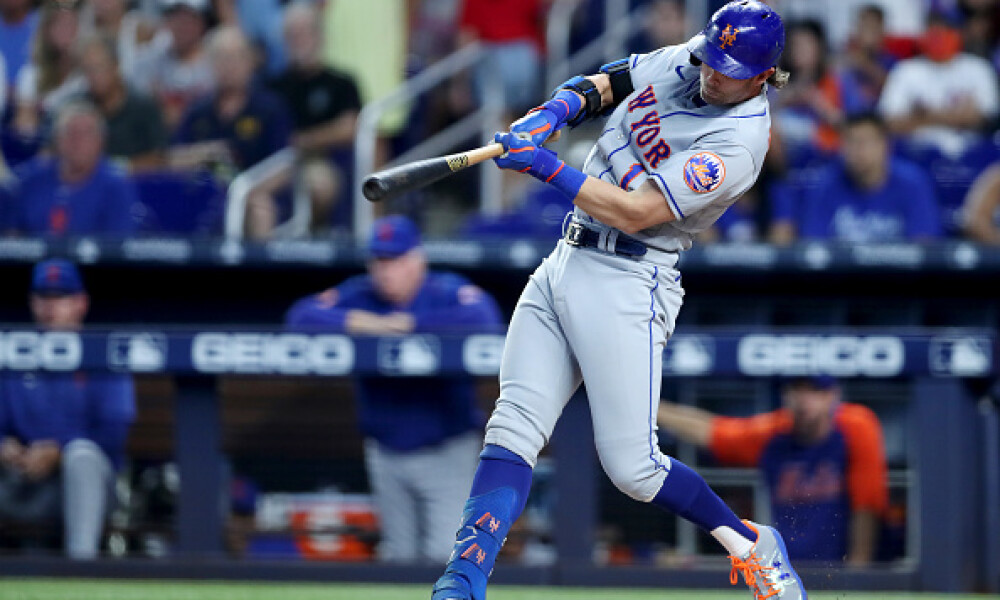 It’s Saturday, so it’s time to grab your coffee, tea, or whatever your morning/early afternoon beverage of choice is and dive into some notable streaks and trends across Major League Baseball. Currently, we have two players with active hit streaks in the double-digits, with Toronto’s Vladimir Guerrero Jr. and Baltimore’s Anthony Santander at 16 games and 15 games respectively. As we dive into some of the hot and cold hitters, there are some under the radar players that should be moving up fantasy baseball player rankings with their recent performances. Additionally, a few of them may be pretty low-owned, making them top fantasy baseball waiver wire pickups. As we are about to embark on the upcoming week, be sure to check out our updated player rankings for August, fantasy baseball waiver wire article and stock watch videos for even more content to help boost your fantasy baseball teams. Let’s take a look at some of the notable hit streaks and current trends across Major League Baseball.

McNeil has an eight-game hit streak working, in which he has five multi-hit efforts. He has seven extra-base hits during this stretch, and has punched out just four times. He’s now hitting .303 with six home runs and two stolen bases on the season, and it’s encouraging to see him bounceback after a rough July. Last month, he hit just .208 with a .274 on-base percentage, but McNeil seems to be back and should continue to provide fantasy baseball managers with a solid batting average at the very least.

During his nine game hit streak, Wong is hitting .406 with two home runs, one stolen base, a .506 wOBA and a 230 wRC+. He’s also hit safely in 13 of his last 14 contests. During this stretch, his average exit velocity is up nearly two miles per hour per hour, his barrel rate is up over three percentage points, and his hard hit rate is almost eight percentage points. 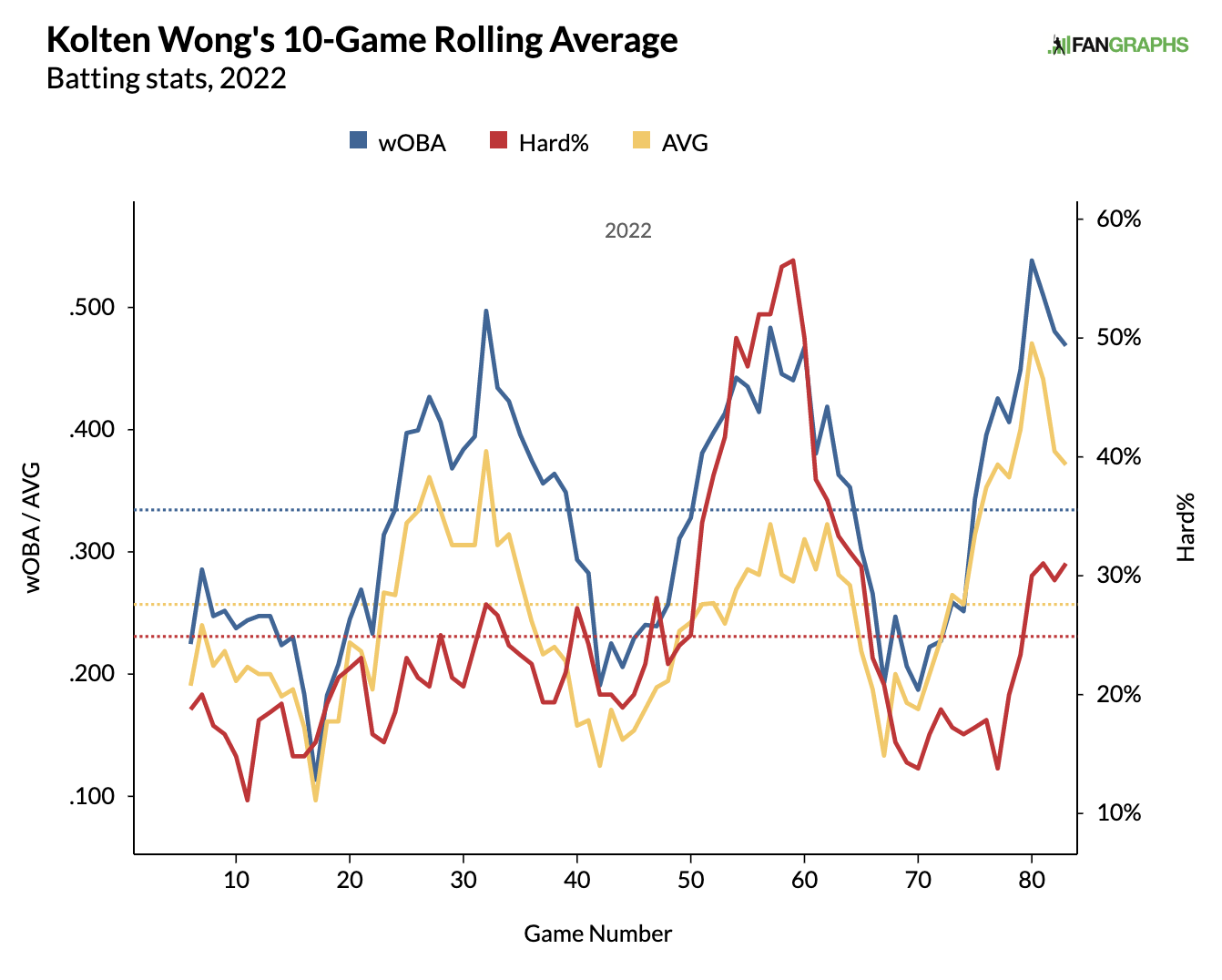 Wong’s batting average for the year is just .138 against lefties, so he’s still best utilized against right-handers.

Coming up through the minors, Gordon hit for a decent average with some solid stolen base numbers. He doesn’t hit for much power, in terms of home runs, and he only has one stolen base since the start of July, but he’s hit a good number of doubles of late, and has been a nice source of batting average. Gordon is hitting an even .500 over his last eight games, with one home run, six doubles, seven RBI, four runs scored and one stolen base. When looking at his last eight games, he’s continued to make hard contact, but his barrel rate is up to 15 percent, and his launch angle rests at 20 degrees. If he’s going to hit like this, he should be a nice source of some production while he’s hitting well, and the closer he can get to the heart of the order the better.

While Slater has put up a decent fantasy season, all things considered, things have gone cold and dreary of late. He’s hitting just .115 over his last seven games, and .163 with a .241 OBP over his last 15 contests. He has some pretty gnarly splits for the year, as he’s hitting .308 on the road and just .244 at home. Furthermore, he’s hitting .281 against lefties and just .250 against righties. 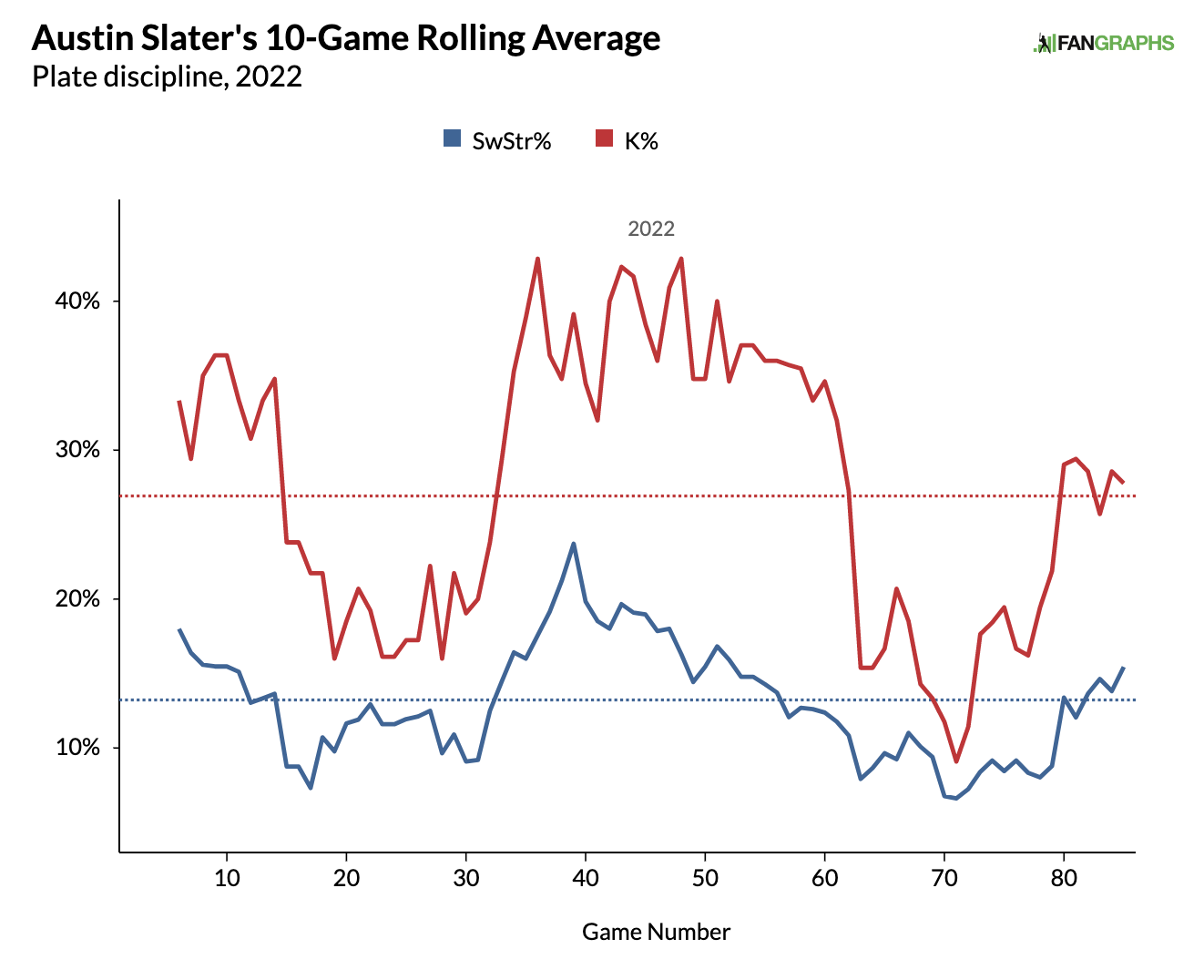 Since joining the Bronx Bombers, Benintendi has struggled, hitting just .083 with a 47 wRC+ over eight games. There’s still plenty of season left, so the Yankees probably aren’t too concerned, but fantasy baseball managers may have a slightly higher level of concern. While Benintendi is still hitting an impressive .305 on the year, he has just three home runs and six stolen bases. If he’s not hitting for power and running, all he gives fantasy baseball managers is batting average. Yes, that’s valuable in his own right, but you want to see Benintendi doing a little more in other categories. To his credit, it’s encouraging that he already has two stolen bases in his tenure with the Yankees.

It’s been a rough 10 games for Moncada, and that’s saying a lot given his struggles for the season as a whole. Over his last 10 games, he’s hitting just .139 with an immense 34.1 percent strikeout rate. The 12.2 percent walk rate is nice, but just five hits and three RBI over your last 41 plate appearances isn’t going to get it done. 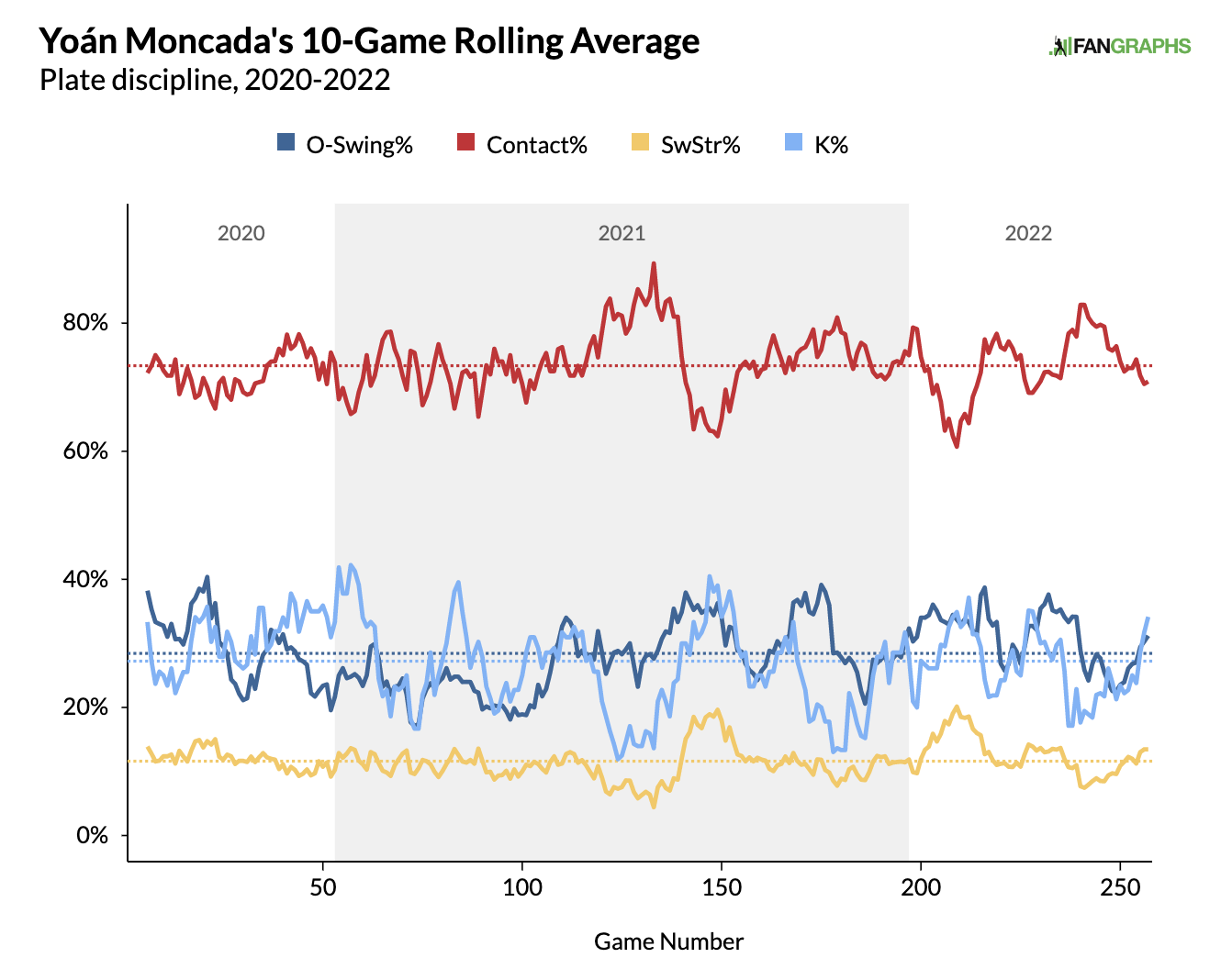 His lack of plate discipline, especially of late, and his current swinging strike rate (13%) and O-Swing rate (31.2%) would be his highest marks since the 2019 season. However, one of the big differences is that he doesn’t have a .406 BABIP to overshadow some of the underlying issues.