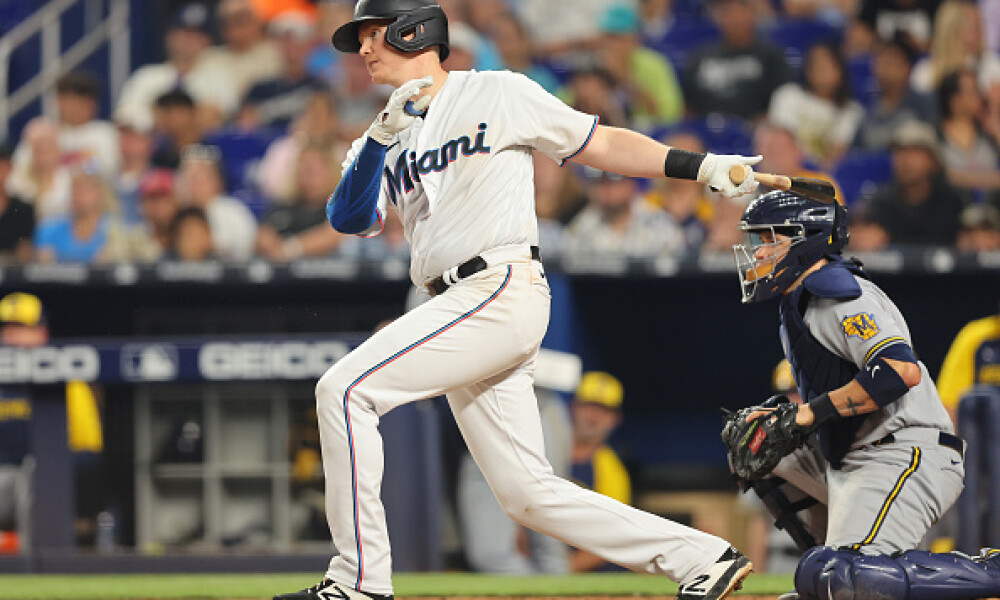 It’s Saturday, so it’s time to grab your coffee, tea, or whatever your morning/early afternoon beverage of choice is and dive into some notable streaks and trends across Major League Baseball. We’ll look at some stars like Yordan Alvarez who is white hot, and guys like Garrett Cooper and Luis Guillorme that look like decent fantasy baseball waiver wire pickups. On the other hand, we look at some big name players, including rookie Adley Rutschman, who are struggling at the dish. Paul Goldschmidt and Trea Turner have continued their lengthy hit streaks, as both stars are currently in the mid-20s. From the game’s best players to fantasy baseball hidden gems, let’s dive into some of the stat leaders in Major League Baseball, and those that should command attention in your fantasy baseball leagues.

Yordan Alvarez, HOU - Alvarez just got rewarded a handsome contract for a designated hitter who sometimes plays outfield. The Houston slugger is hitting .448 with a .793 slugging percentage over his last seven games, hitting more home runs (3) than strikeouts (2) in that span. He’s still hitting just .232 against southpaws in 2022, and .206 at home, but regardless of venue, whenever a right-hander is on the mound, Alvarez is a threat for a monster day.

Garrett Cooper, MIA - Cooper is hitting .292 on the year, but he has five multi-hit games in his last seven contests, and thus far in June, he’s hitting .462. In terms of his barrel rate and exit velocity, everything is on par from recent years, but he’s traded ground balls for fly balls and line drives and he’s cut back on his whiff rate slightly. The below chart shows that he’s enjoyed a reduced strikeout rate of late, and while it will likely climb with time, it’s encouraging to see Cooper’s strikeout rate closer to the low-to-mid 20s rather than last year’s 27.2 percent mark, or his 26+ percent mark in each year from 2017-2019.

Luis Guillorme, NYM - Guillorme has been excellent of late, and there’s no denying that, but the staying potential is highly unlikely for Guillorme. His .356 batting average is powered by a .408 BABIP, and while his .297 xBA is still very good, it shows that regression is coming for Guillorme. He’s a career .283 hitter, so while there is still some fantasy value to be had with Guillorme in that department, he doesn’t do much else. His batted ball profile compares to the likes of Nico Hoerner, Nicky Lopez, and Yonathan Daza, so if Guillorme isn’t going to provide anything behind average, he’s a one-trick pony with limited fantasy appeal. However, for the moment, enjoy the batting average boost he’s providing.

Andrew McCutchen, MIL - McCutchen is stuck in a major slump. Over his last seven games, he’s 1-for-31, which comes out to a .032 batting average, and over the last 15 games, he’s hitting just .159 (10-for-63). Fortunately for Milwaukee, if you can even say that, his lone hit over the past week was a game-winning base knock, but Cutch has really struggled of late. The veteran outfielder was a lefty killer in recent years, hitting .291 with a 157 wRC+ against lefties from 2019-2021. In 2022, however, he’s hitting just .184 with a 56 wRC+ against southpaws. Beyond that, his average exit velocity is down, and his current GB/FB ratio of 1.22 would be his highest mark since 2019 (1.23). If you’re still holding onto McCutchen, it’s time to cut those ties.

Alec Bohm, PHI - After a hot start to the year, Bohm has cooled off a bit, hitting .252 in May and going hitless through his first two June contests. The strikeouts have returned, and are actually at an elevated mark, which isn’t ideal for the young third baseman.

He’s still sporting an excellent .303 xBA, so there’s optimism that he’ll break out of this funk, but when he does, will the power return? In 20 games in March/April, he posted a .154 ISO, but since the calendar flipped to May, it’s down to just .071. Fantasy baseball managers are hoping that the strikeout rate dips, and Bohm starts finding the gaps and the bleachers for some extra bases.

Adley Rutschman, BAL - Let’s just get this out of the way. Rutschman is still an elite catching prospect with all of the potential in the world behind the dish. His first 12 games at the Major League level do not define his career. He’s hitting an uncharacteristic .149 (.228 xBA) with an even more uncharacteristic 26.4 percent strikeout rate. He’s playing the hardest position for a young player to deal with the MLB adjustment, so give the guy some time. The future perennial All-Star will go through some growing pains, but when it clicks, watch out. If you have an impatient Rutschman owner in your league, start sending them offers, gift cards, etc.