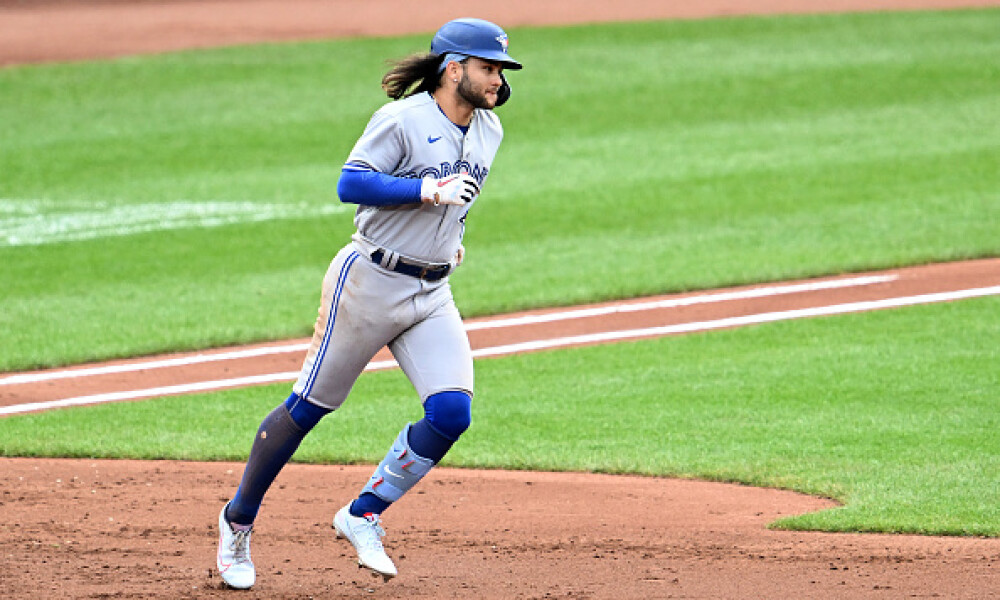 It’s Saturday, so it’s time to grab your coffee, tea, or whatever your morning/early afternoon beverage of choice is and dive into some notable streaks and trends across Major League Baseball. The longest current hit streaks in Major League Baseball belong to Atlanta’s Michael Harris (15 games) and Tommy Edman (12 games), and Bo Bichette, one of the highest rated players in preseason fantasy baseball rankings, has come along of late. On the other hand, Bryce Harper and Corey Seager are struggling as many fantasy baseball managers are chasing down the league title. As we are about to embark on the upcoming week, be sure to check out our fantasy baseball waiver wire article and stock watch videos for even more content to help boost your fantasy baseball teams. Let’s take a look at some of the notable hit streaks and current trends across Major League Baseball.

Bo Bichette, TOR - There’s no better person to lead off this section of the article with than Bichette. Over his last seven games, he’s hitting .500 with five home runs, 15 RBI, and 11 runs scored during this stretch. Talk about a meteoric rise for Bichette, but look at the below chart, and tell me that Bichette isn’t trying to win back the fantasy baseball community that used a top six or seven pick that may have become a bit disgruntled with his overall production on the season.

Don’t get me wrong, he’s been good, but the numbers this season don’t quite match his 2021 season.

TJ Friedl, CIN - Friedl has been excellent of late, hitting .380 with five home runs and 11 RBI over his last 15 games. Like most Cincy hitters, his numbers at home are far more impressive, but Friedl has hit lefties quite well this season, while not being a slouch against righties either. Friedl hasn’t displayed top end max exit velocity this season, and his .239 xBA will be a focal point for many naysayers, but the production this year has been quite useful for fantasy baseball managers. Oh, Great American Small Park helps, too.

Oscar Gonzalez, CLE - Gonzalez is back, baby! After a bit of a slump, Gonzalez has bounced back in a big way, hitting .429 with a .786 SLG over his last seven games. He hit two home runs yesterday, and he’s hitting .500 with an even 1.000 SLG over his last five games, including three multi-hit efforts. If an impatient fantasy owner gave up on Gonzalez, it’s time for you to buy in now for the most important stretch of the fantasy baseball season!

Corey Seager, TEX - Seager had two hits yesterday, which was nice, considering in the five games prior he was 0-for-21 with six strikeouts and a 60 percent ground ball rate. Seager’s first season in Texas outside of the 29 home runs has been a bit disappointing, but Texas has played more favorable to pitchers, and a .244 BABIP has tanked his batting average to .247.

Evan Longoria, SFG - Over his last 14 games, Longoria is hitting just .163 with a 32.6 percent strikeout rate, and perhaps even worse, a 34 wRC+. At this point in Longoria’s career, you play him against lefties, and sit him otherwise. It’s not rocket science with Longoria, but while he’s struggling here, you’ll want to pick and choose your spots carefully, even against lefties, considering that over the last 14 days, he’s hitting just .200 with a .241 wOBA and 53 wRC+ against southpaws.

Bryce Harper, PHI - Over the last calendar week, Harper is 2-for-15 with 10 strikeouts! TEN! Despite his 41.7 percent strikeout rate here in the month of September, his exit velocity is solid, albeit a couple ticks down, but the lack of barrels has been concerning. It’s hard to be too concerned with Harper given his status and talent, but this mini-slump at this point in the fantasy baseball season is incredibly tough for fantasy baseball managers to stomach.