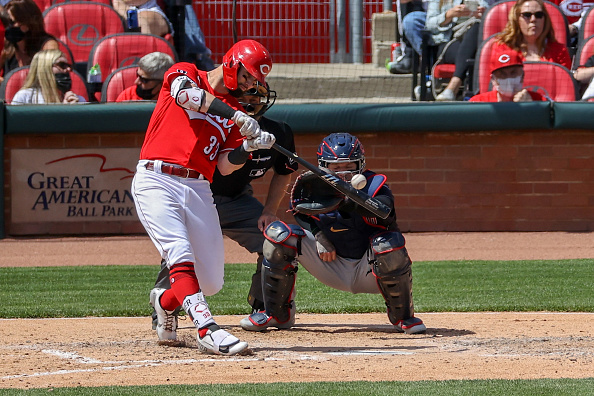 After recently updating my rankings, some things didn't change much since it's only one month and then there are drastic risers. Even players I was high on saw big jumps based on the first month of performance.

If you play in a deeper format or in a league that starts five outfielders, it's easy to see how thin the outfield is and injuries to Eloy Jiménez , Luis Robert , Cody Bellinger , and Christian Yelich don't help, but it's awful when compiling the rankings.

Here are a few of my biggest risers.

Cedric Mullins (BAL) Playing time was the main concern for Mullins in early March. As the spring went on, it started to become clear the Orioles wanted him to play consistently. I was able to draft him in one league and add off the waiver wire in a draft done in early March. Mullins gave up switch-hitting and is only batting left-handed and it's working. He has a slash line of .322/.382/.534 with 15 runs, five home runs, 11 RBI and three stolen bases in 118 at-bats. The hard-hit rate is up to 42.1 percent and his sprint speed is in the 88th percentile. It's only 43 at-bats, but Mullins is batting .395 against left-handers with two home runs. He's hitting leadoff and playing every day. Even if he slows down, he will be a bargain.

Buster Posey (SF) I never drafted Posey in the past because the price was too high. This year, he was free and I wish I talked myself into him more. There was no risk for his draft price and there was potential for him to be good again. He had hip surgery in 2018 and had his worst average in 2019 and sat out last season by choice. Posey is off to a great start with a slash line of .382/.440/.735 with 17 runs, seven home runs and ten RBI. The Statcast page looks good for Posey and the barrel percentage is way up and he's hitting the ball hard. The time off likely helped him get healthy. The power is surprising since he has a 32.1 percent fly ball rate and 38.9 percent HR/FB rate. Still, anyone drafting Posey would be thrilled with 15 home runs and he's almost halfway there.

Mitch Haniger (SEA) Haniger is another player I missed out on. We knew he was good, but it came down to health. Haniger bats lead off and plays every day. He has a slash line of .261/.307/.548 with 21 runs, eight home runs and 23 RBI. In 2018 when Haniger played 157 games, he hit .285 with 90 runs, 26 home runs, 93 RBI, and eight stolen bases. We probably won't see him run, but there's solid power with good counting stats if he can stay on the field and with how thin outfield is, Haniger is a good player to have on your roster.

Trevor Rogers (MIA) I have written and talked about Rogers a lot. He was a late-round target of mine and he moved up a lot. Rogers is 3-2 with a 1.91 ERA, 1.06 WHIP, 33.8 percent strikeout rate and ten percent walk rate. He's a hard-throwing lefty and gets a lot of swings and misses. He was the 13th overall pick in 2017. The one issue is the walks, but they have come in bunches. He walked six in his first ten innings and has walked seven over his last 23 innings. The Marlins will be cautious with his innings since Rogers skipped Triple-A and pitched 28 innings with the Marlins last season. He pitched 136.1 innings in the minors in 2019. He has pitched at least six innings in three of his six starts. The pitch counts in the games were: 77, 82, 95, 82, 85 and 77. Always be open to trades for any player because someone might overpay, but Rogers is someone I would hold.

Carlos Rodón (CHW) Rodon was another late-round target for me based on the spring increase in velocity and command. Rodon is 4-0 with a 0.72 ERA, 0.64 WHIP, 37.9 percent strikeout rate and 9.5 percent walk rate. He threw a no-hitter in his second start against the Indians. Rodon has faced the Indians twice, Mariners and Tigers. A lot of the Statcast data looks good and the velocity is up. Health has been a major issue for Rodon and the innings are a concern for the long term and that's going to be an issue for many pitchers and I will roll with them for as long as possible knowing more pitchers will evolve later in the season.

Jesse Winker (CIN) Every time I watch Winker, he has good at-bats. He has a slash line of .352/.412/.636 with 20 runs, six home runs, and 16 RBI. He is hitting the ball hard and has a barrel percentage of 16.7 percent. He has a wOBA of .446. He has a .417 BABIP, so the average will come down, but he will be an asset in batting average since it is way down across baseball. Winker has shown these glimpses in his career and it's a matter of him staying on the field. He's a really good hitter and a career year is happening.