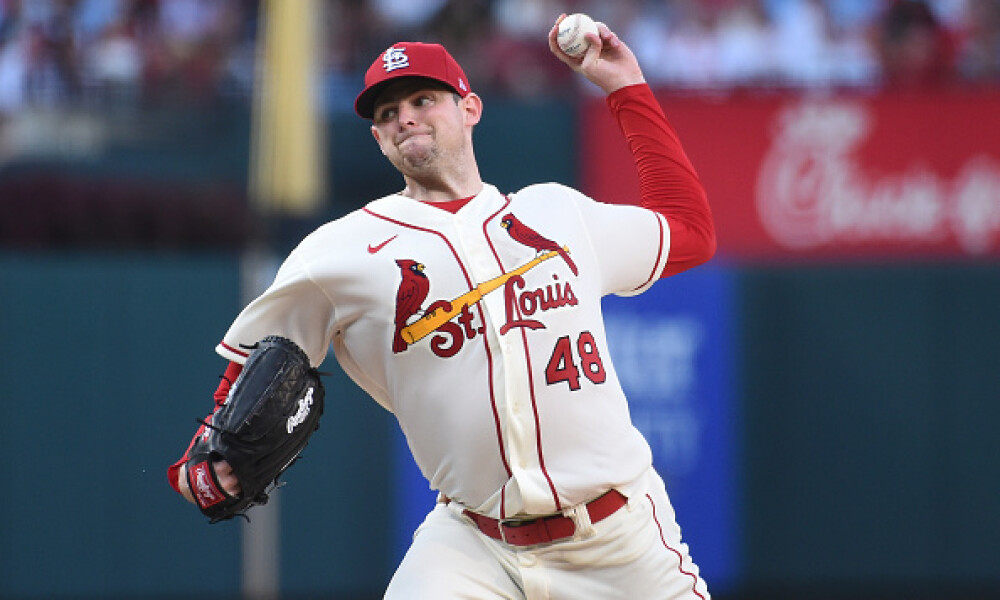 When the New York Yankees traded Jordan Montgomery to the St. Louis Cardinals at the 2022 MLB Trade Deadline, it certainly raised some eyebrows both in real life and for our fantasy baseball lineups. It’s rare to see a solid starting pitcher go from one playoff contender to another mid-season, but that’s exactly what happened here. Well, it turns out that the change of scenery is helping Montgomery a ton as he rises up fantasy baseball rankings and rest-of-season MLB projections. The left-hander has been dominant in his three starts with St. Louis since the deadline and his fantasy baseball stock is trending up. If you added him off of the fantasy baseball waiver wire or acquired him in a trade earlier this season, you’re loving Montgomery’s improvement since leaving New York. Let’s dive further into the Cardinals pitcher and his newfound success for the latest fantasy baseball player spotlight.

Before we get into Montgomery’s success in a St. Louis uniform, it’s important to go over some context as to how his time with the Yankees ended. First, the southpaw was pretty good to begin this season and even had a 2.72 ERA in mid-June with a run of five straight quality starts at one point. Then he gave up four runs on June 22nd and five runs in the following outing before some struggles kicked in. After beginning the season so well, Montgomery had a 5.36 ERA spanning eight starts from June 22 to July 31. In his last two outings in a Yankee uniform, the lefty gave up nine total runs over 6.1 combined innings.

Overall, Montgomery compiled a 3-3 record, 3.69 ERA, 1.10 WHIP, and 4.3 K/BB rate in 21 starts with the Yankees. Again, those aren’t bad numbers but the subpar month-long stretch leading up to the deadline makes New York’s trade a bit more understandable. For fantasy, he had been pretty solid with some higher-strikeout performances and a couple quality starts mixed in during that last month. However, Montgomery failed to earn a victory from June 22nd on and only had three wins over his 21 outings with the Yankees.

That leads us to Montgomery becoming a part of the Cardinals rotation at the trade deadline and flipping the switch from those mid-season struggles. Through three starts with St. Louis, the 29-year-old has allowed just one run over 16.2 combined innings for a phenomenal stat line: 0.54 ERA, 0.90 WHIP, and 17:3 K:BB ratio. Plus, he’s won all three of his starts this month – which ties the amount of victories he had all season with the Yankees.

Of course, this is a very small sample size and there’s no way Montgomery will continue to be this good the rest of the way. Still, it’s encouraging to see him pitching so well after leaving New York on a sour note. Check out how some of his stats and advanced metrics over three starts with the Cardinals compare to his numbers with the Yankees in 2022:

Looking closer at his three starts with St. Louis thus far, Montgomery’s performances are night-and-day from his last chunk of outings in the American League. In his first start after being traded, the lefty ironically tossed five shutout innings against the Yankees. Then he added six scoreless frames with eight strikeouts in a pivotal divisional matchup against the Milwaukee Brewers the next time out. This past week, Montgomery allowed one run with eight more strikeouts over 5.2 strong innings.

So, why is Montgomery doing so much better in a Cardinals uniform now? Well, we have a few different factors here.

First, and this can’t go overlooked, every St. Louis pitcher benefits from throwing to a veteran catcher like Yadier Molina. That’s not to say Yankees’ backstop Jose Trevino is bad, but he’s no Yadi. The below excerpt from Katie Woo’s story on The Athletic puts the Molina influence into perspective:

Secondly, some of Montgomery’s success may be stemming from his own mindset and being more confident and comfortable with his new squad. “Part of the business is being traded,” Montgomery said when asked about the Yankees shipping him off. “I know what I’m worth and I think the Cardinals know what I’m worth.” Maybe that’s a slight at the Yankees, but it shows us a pitcher that seems to be happy he’s on a team that wants him.

Third, and possibly most importantly, is Montgomery changing up his pitch repertoire since joining the Cardinals. While with the Yankees this season, the southpaw threw his sinker 35-45% of the time but the four-seam fastball made up just 5-10% of his arsenal. The use of the four-seamer has now increased a ton now that the lefty is in St. Louis. Over his three starts with the Cards, Montgomery is throwing his four-seam fastball 28.1% of the time while the sinker has reduced slightly to 30.2%.

Montgomery also utilizes a curveball and a changeup, but those pitch percentages haven't changed much after the trade. Instead, it's the big jump in usage rate of the four-seam fastball that's a notable difference from when he was with New York. Plus, even though he's throwing the four-seamer more, the pitch has been very effective. Montgomery's four-seam fastball has allowed just a .130 batting average and .161 wOBA across his three St. Louis starts and seven of his 17 strikeouts have come via the heater.

The increase in usage and effectiveness of the fastball can also be traced back to Yadi Molina's veteran pitch-calling from behind the plate. It can also be attributed to Montgomery's own confidence on the mound since joining the Cardinals. Getting seven K's on the four-seamer over the last three starts is even more impressive when you consider he only had six total strikeouts with the pitch across his 21 starts with the Yankees.

Montgomery's stats with the Cardinals after the trade are certainly a good sign of continued success for the rest of this season. The on-surface numbers tell much of the story, but hopefully you now have a better understanding of why he's pitching so well. If you roster him in fantasy baseball, you can safely expect more solid outings incoming in the final month-plus.

The lefty's next start is slated to come in Wrigley Field against the Chicago Cubs on Monday. It'll be his first road test since joining St. Louis, but there's reason for optimism. The Cubs have struggled against left-handed pitching over the last few weeks and we could easily see another high-strikeout outing for Montgomery. He's also in line for a two-start week coming up, though the following matchup against the Atlanta Braves may be tougher – at least it comes at home again.