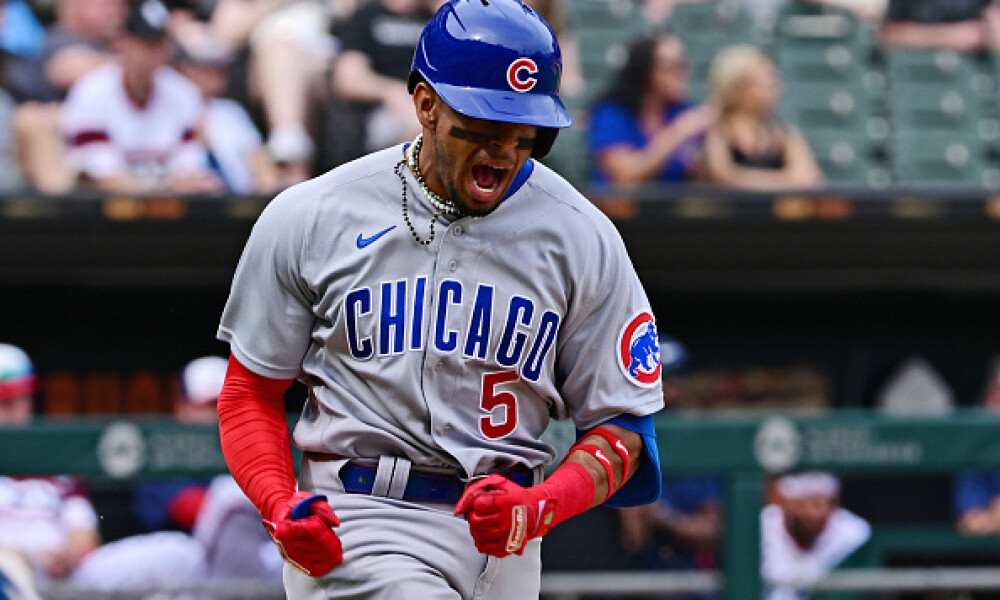 The Chicago Cubs may be nine games under .500 and trailing the Pittsburgh Pirates by a couple of games in the National League Central, but that doesn’t mean that there isn’t some fantasy goodness to be had with this team. Christopher Morel is making quite the fantasy baseball impact as a rookie and has been one of the best fantasy baseball waiver wire pickups over the last week or two. In Yahoo fantasy baseball leagues, Morel is already carrying second and third base eligibility, along with outfield, but he isn’t far from gaining second base eligibility for those who play in ESPN fantasy baseball leagues or NFBC formats, which makes him incredibly enticing moving forward. With the Chicago Cubs losing Jonathan Villar and Seiya Suzuki to the injured list, Morel is going to have ample opportunities to stick in the Chicago lineup moving forward. Can Morel be a diamond in the rough for fantasy baseball managers, and should he be owned in all formats? Let’s take a look at his start to the 2022 season.

First and foremost, how close is second base eligibility for those who play in NFBC or ESPN setups? Well, both sites require 10 games in-season to gain eligibility at a new position, and at the moment, Morel has six games at second base, three games at third base, and one game at shortstop. In his last seven starts atop the Chicago order, he’s played at second base in four games, so by the end of the week or early next week is very much in play for Morel and fantasy managers.

Is this sort of production sustainable for Morel? If you look at 2017-2019, you would be hard-pressed to believe so. However, in 2021, Morel was good, outside of his batting average. He hit just .220 with 124 strikeouts in 101 games at Double-A in 2021, but he did hit 17 home runs and go 16-for-19 in stolen base attempts. Prior to getting the call this year, he was hitting .306 with seven home runs, three stolen bases and a 30:10 K/BB ratio in 28 games. Essentially, what we’ve seen with the Cubs is what Morel was last year in the minors, which is a strikeout prone guy with decent pop and good speed.

Strikeouts were an issue in the minors, posting a career 26.6 percent strikeout rate, and his current mark in the majors sits at 24.6 percent through a handful of at-bats. However, that could be in some trouble, given that his contact rate sits at just 69.1 percent, and he’s posted a 14.5 percent swinging strike rate. If you look at current qualified players that have a contact rate at or below 69.1 percent with a swinging strike rate between 13-17 percent, Morel’s strikeout rate of 24.6 percent would be the second-lowest mark, being bested only by Kole Calhoun’s 24.5 percent mark. Of this group of 10 players, excluding Morel, the average strikeout rate is 30.62 percent. I have some concerns about where his batting average will sit long-term, and others do as well, considering that his hit grade is a 30/35 on a 20-80 scale.

While there are going to be some long-term concerns with Morel’s ability to hit for average, his legs are legit, and he’s willing to take the free pass to first base. Chicago is going to let him run, and he’s worked his way to the top of the lineup, serving as the team’s leadoff hitter in each of the past seven days. He’s stolen a base in four of his last five games and is in the midst of a 10-game hit streak at the moment. As mentioned earlier, the injuries to Villar and Suzuki further solidifies his starting role, and locks him in atop the order for the foreseeable future. The strikeouts could take its toll and start to hamper that batting average, but he does have some solid raw power, and again, he’s legit on the base paths.

Morel is only a week or two at most away from adding second base eligibility to his ledger, making him even more enticing to fantasy baseball managers who need some stolen bases and flexibility in their lineup. Morel is incredibly under owned in fantasy baseball leagues at this point, as he’s rostered in just 39 percent of Yahoo leagues and under nine percent of ESPN formats. The speedy infielder/outfielder could end up being a nice trade chip if he continues to hit and run, as the strikeouts are inevitable with the 22-year-old.