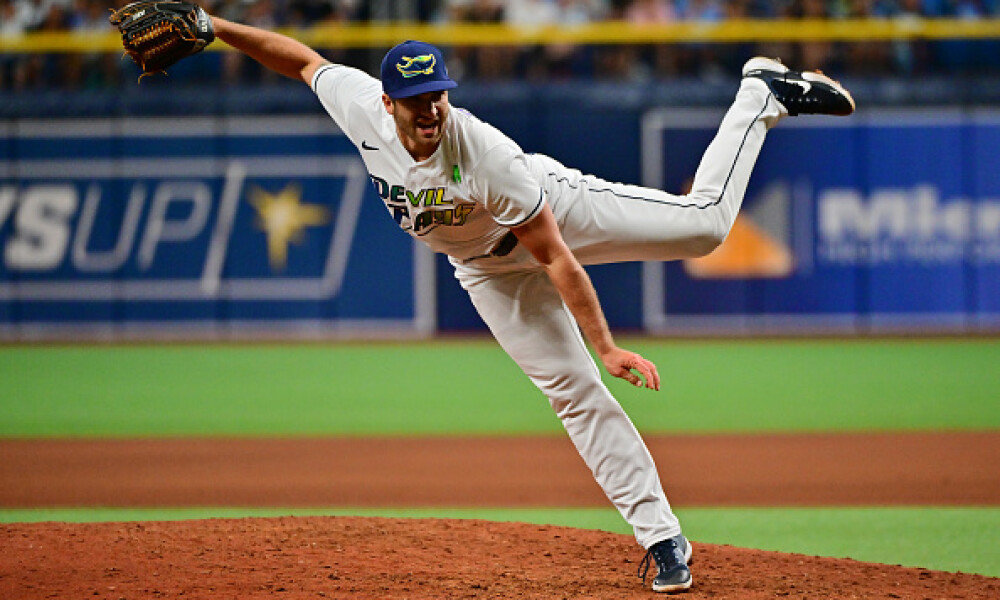 Two fantasy baseball pitchers have recorded their first saves of the season since last week’s article. Can we officially call them closers? Well, they pitch for the Reds and the Rays and both teams seemingly change their closers as often as you might change your socks so let’s not jump to conclusions. We’ll try to make some sense out of both bullpen situations and point out a couple of under the radar relievers who can sometimes provide better fantasy production than some ordinary starting pitchers. Don’t forget to utilize our Closer Grid throughout the week. It’s a great resource for identifying bullpen closers, handcuffs, and sleepers.

(The statistics quoted in this article are accurate as of the morning of 5.31.2022)

Hader converted all three of his save opportunities last week, despite spending three days on the family medical emergency list. He converted both ends of a double header on Monday and hasn’t given up a run all season (16.2 IP). Devin Williams filled in for Hader while he was out and saved two games and held one as well.

Rainey picked up two saves and a hold. He pitched 3.2 innings, striking out 4 batters and walking just one. They were his first saves since April 19th. Rainey now has five of the Nationals’ six saves on the season and is clearly their closer.

As expected, Holmes has taken over as the Yankees’ closer with Aroldis Chapman on the IL. He hasn’t given up a run in his last 22 appearances, striking out 26 batters in 24 innings while yielding just two walks during that span. With Holmes pitching so effectively there is no rush for the Yanks to reinstate Chapman from the IL until he is completely healthy.

Boxberger pitched four scoreless innings last week, striking out six batters and walking none. Entering Wednesday’s action, he has an overall 2.45 ERA and 1.036 WHIP, and he’s held 11 games on the season. Boxberger has 81 career saves but he shares a bullpen with Hader and Williams and won’t likely get the opportunity to close out many games for the Brew crew this season.

The Rays have used Adam as early as the third inning and as late as the 10th inning this season. He has five holds on the season, three of which were recorded over the past week, and Adam is one of several Rays pitchers to save a game. He has a sparkling 0.87 ERA, a microscopic 0.532 WHIP and is being used in late inning high leverage scenarios. Adam might get another save opportunity before the season is over, but don’t count on it. Instead look for him to provide more holds and help your pitching ratios.

Minter held three games for a second consecutive week and now has 11 on the season. He’s pitched 14.1 consecutive scoreless innings, striking out 20 batters and walking just three in that span. As we mentioned last week, Minter saved 20 games for the Braves during the 2018 and 2019 seasons.

Diaz picked up three holds in three appearances last week. He struck out four batters and walked one in three innings pitched. Diaz has been one of the most reliable arms in the Reds bullpen this season, posting a 1.19 ERA and 0.926 WHIP. He has five holds, a save and two wins on the season.

Like Boxberger, the Brewers have been using Gott in the seventh and eighth inning of late. He held three games last week and has seven on the season. Gott has been scored upon in two straight outings heading into Wednesday night’s action but still maintains a 3.00 ERA and 1.00 WHIP. The Brewers bullpen has been a good resource for holds. As a unit they have 36 which ties them with the Mets and Blue Jays for second most in baseball.

Former wrestling great “Rowdy” Roddy Piper used to say “just when you think you have all the answers, I change the question.” I’ve already used that quote in other fantasy articles I’ve written, but it seems to accurately describe what it’s like when trying to predict who’ll be closing out games for the Rays on any given day. Six different relievers have saved at least one game for the Rays this season. Andrew Kittredge leads the team with five saves but he’s on the IL. Last week manager Kevin Cash used Colin Poche to close out two games for him. He then had Poche work the eighth inning of a game the Rays were leading, and he promptly picked up the hold. J.P. Feyereisen picked up the save in that game. Earlier in the month of May Brooks Raley picked up two saves in the span of a week. He then blew a save opportunity and hasn’t gotten one since. The bottom line is that especially when Kittredge is unavailable, Cash is going to use the reliever he believes has the best match up and gives him the best chance to win a game. If you’re desperate enough for saves to roster a Rays reliever (other than Kittredge) thinking that you’ve figured out Cash’s strategy, at least roster the pitcher who’ll provide you with the best ratios. Cash’s favorite flavor of the week seems to be Poche…but heading into Wednesday's action Feyereisen hasn’t given up a run all season and he did pick up a save on Sunday…see what I mean?

The Reds are another team who have used several relievers (four to be exact) to close out games this season. On May 25th Hunter Strickland pitched the ninth inning and earned his first save of the season, but just four days later he was brought in to pitch the seventh inning and picked up his first hold of the season. Tony Santillan, the team’s leader with four saves on the season has pitched well recently. Dating back to May 17th, Santillan has given up just one run in his last six appearances (7 IP) and he’s saved three games, but he’s also held two others during that time span. Art Warren, second on the team with three saves, has also been used in non-save and hold situations as well. Like Kevin Cash, Reds manager David Bell generally uses a best matchup-based approach when deciding on who to bring in to try to close out games for his teams. Based on Bell’s strategy and the fact that entering Wednesday night’s action Reds relievers had a total of just nine saves on the season, season long fantasy managers shouldn’t expect to find much fantasy value within the Reds bullpen.

With starting pitchers averaging just 5.1 innings per start so far this season, in some instances you might get similar, or even better production by using a top middle relief pitcher instead of a mediocre starting pitcher in a given week. The following are examples of middle relievers who often make multi-inning relief appearances and might have deep league fantasy value based on their recent performance.

It seems odd to feature two Reds relievers in this article, especially since their team bullpen has a cumulative 4.82 ERA, third worst in baseball. However, Kuhnel, who had not pitched in the major leagues since 2020, has become a very reliable arm in the Reds bullpen. He has 13 strikeouts in 9.1 IP and a 0.96 ERA since being recalled from Triple-A on May 8, 2022. He made three appearances last week, pitching 5.1 scoreless innings last week. He struck out seven and walked none.

Morgan made one spot start for the Guardians earlier in the season but has been more effective when pitching in middle relief. He has an overall 2.57 ERA and 0.524 WHIP on the season. Morgan threw five scoreless innings last week across three appearances striking out seven batters while walking none.