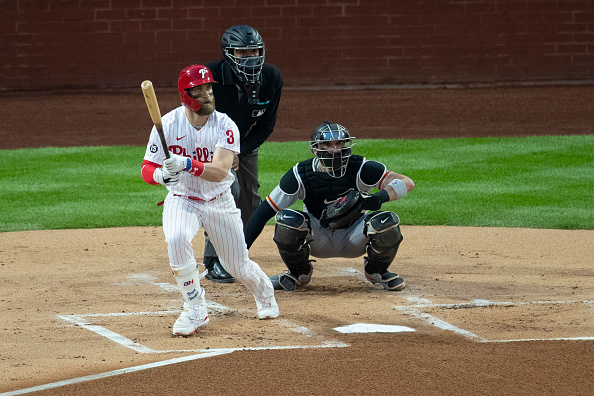 Again, with warning of the effects of small sample sizes, a tweak this week to the trends column adding three hitters due for positive migration to the mean.

Riding a .647/.727/1.118 slash line over his last 22 plate appearances to Coors Field sets up Harper well for the weekend. He's walked five times against one strikeout in this sample with two home runs, four RBI and a stolen base. Guessing he launches two-to-three home runs this weekend as a popular target in DFS.

Pondering what a healthy Olson may be capable of seems to be manifesting itself in 2021. He tied for second, with a multitude of hitters, with six home runs this year and launched four over his last six contests with 15 runs plus RBI. Displaying great plate discipline may unlock the door for a 40-plus home run campaign.

Finding batting average help at a time when the league average slash line of .233/.312/.391 proves difficult. However, over his last six games spanning 24 plate appearances, Reynolds owns a .438/.625/.750 slash line with seven walks against two strikeouts with a .313 isolated power. He's not a big power guy but he helps absorb struggling hitters in 12-team mixed leagues with some runs and RBI insulation.

Warning signs jumped off the page in his underlying data last year and he's off to a slow start made worse by going hitless in his last 19 plate appearances over six games. This results in a .000/.211/.000 slash line with a .146 weighted on-base average (wOBA) and -8 weighted runs created plus (wRC+) metric. Sprinkle in a 36.8 strikeout percentage and keep him benched if possible hoping for the power and speed to return. Meet this year's Danny Santana .

With a path to playing time cleared by Anthony Santander landing on the injured list, Mountcastle's struggling with no hits his last 17 plate appearances during his last five contests. He's produced one RBI and one stolen base with a -83 wRC+ in this sample.

Not just his spot in the batting order being argued, Tucker's flat line slash of .095/.095/.095 his last 22 plate appearances over six games hurts anyone who took him in the third round. Streakiness should be expected from the talented young outfielder but his .085 wOBA and -50 wRC+ need a spark.

While his defense remains shaky, Devers production on offense remains stable. In fact, he may be in for better results soon if his actual numbers shift towards his expected rates:

Scary to think another level may be on tap soon, but my Tout Wars team remains hopeful it comes to fruition.

Hear me out, this one comes with some trepidation based on past results. However, Carpenter remains on the precipice of positive outcomes if his numbers migrate towards the quality of contact he's produced this season:

No guarantees here but in a league only format or 15 team deep mixed league, kicking the tires on Carpenter may pay off, especially in terms of home runs.

This could be many of the players on the Mets roster, but Smith deserves better statistics than his current rate of production:

Do not be surprised to see Smith hit a home run or two this weekend if his hard hit and barrel rates translate to success rather than outs.