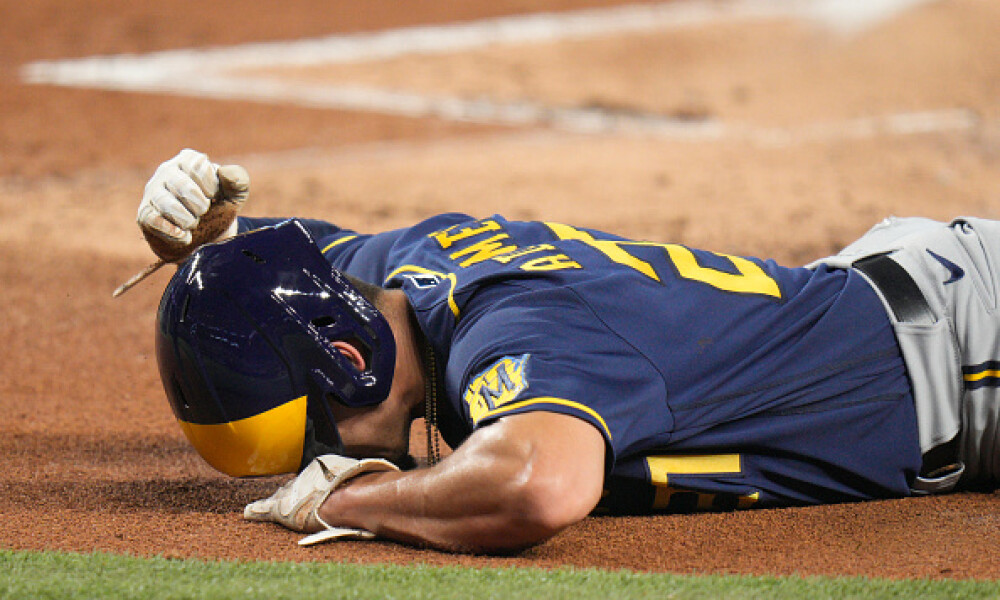 Ronald Acuña Jr. – He didn’t play the whole weekend with a groin injury, and Acuna underwent an MRI that didn’t show anything serious. There is no talk of him hitting the injured list, and it would appear that he is poised to return to the lineup on Monday or if not in the next couple of days. I will say that I am concerned that a second injury popped up with Acuna so soon after returning from the knee injury, but you can’t trade him at such a low point, and he was doing so well that you just have to play it out with him.

George Springer – He missed Saturday after colliding with the outfield wall on Friday, but Springer was able to return to the lineup on Sunday and although he didn’t get a hit you can feel comfortable putting him back into your lineups for the coming week even if you have once a week starting lineup moves. He is off to a solid start to the season and should never be out of your lineups when healthy.

Austin Meadows – He has missed several games lately with an inner ear infection and dizziness and now Meadows will be headed to the injured list to try to get himself right. Meadows did play on Sunday but left after one inning after popping out and having vertigo symptoms. There is no timetable for his return right now, but I can’t figure that this will be too much of an extended absence. Injury problems have always been his achilles heel and they rear their ugly head again. Stay tuned to this column for updates on his status.

Blake Snell – Padres pitcher Blake Snell will make his first start of the year on Wednesday against Philadelphia as he has successfully completed his minor league rehab assignment with his third start there. Padres manager Ryan Christiansen announced the start as well as Nick Martinez and MacKenzie Gore moving to the bullpen with Snell’s return. We will see how long Snell can last this time before he is back in this article again.

Willy Adames – He left Sunday’s game with an ankle injury, but x-rays came back negative and there is no structural damage. The team is declaring it a sprain as of now and we await further details, but it seems that he has avoided a major injury and as of right now seems like he likely will avoid the injured list as well. That being said, even with his nine home runs early, I would likely put Adames on your bench if you are in a league with weekly roster moves and for those of you with daily choices obviously watch for more news for when he returns to the lineup.

Tylor Megill – He gave up eight runs over 1.1 innings on Wednesday and he has now hit the 15-day injured list with right biceps inflammation. He is going to have an MRI to show the extent of the injury, but could this be a case of you were terrible now rest a little? Or was he bad because he was hurt? We will get more information on this situation in the coming days, but I am not sure Megill is a guy you need to stash if he is going to miss an extended period of time. He was great before that last start, but I certainly did not expect him to continue to pitch that well.

Jesús Luzardo – He has been pitching a lot better this season, but Luzardo’s year will now be stalled as he heads to the injured list with a forearm strain. If you have been following baseball or fantasy baseball for a while, you know that forearm injuries are often very bad news for pitchers. They did make the move retroactive to May 12th to try to limit his time on the injured list, but without knowing more I am going to speculate and say this will be a longer term injury than two weeks. Keep in tune to the news for a better diagnosis in the next few days.

Tyler Stephenson – The Reds backstop took a foul ball off the face mask on Saturday and didn’t play Sunday, but the good news is that he cleared concussion protocol and is eligible to return. Considering that he has had concussion problems in the past, don’t be surprised if he takes a few more days off, but it looks like he will avoid the injured list and didn’t suffer a significant injury. He has been one of the better fantasy catchers this season and you will want to get him in your lineups as soon as he gets back on the diamond.