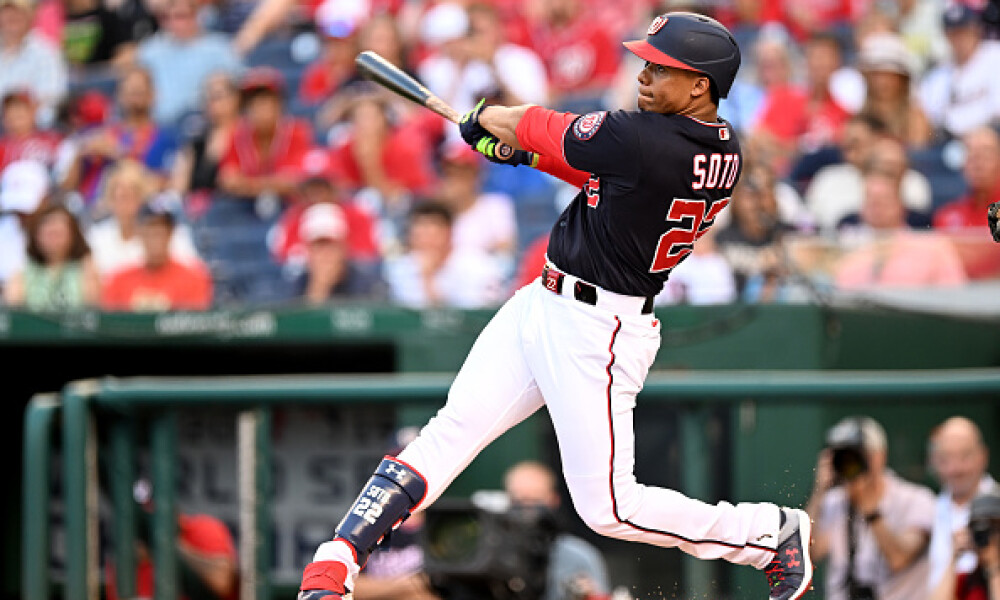 Happy Independence Day to all celebrating! The fun thing about sports is they don’t take a break for holidays. The bad news is that MLB injuries don’t take a break either and we have plenty of fantasy baseball news to get to on this Monday. Washington Nationals star Juan Soto and Los Angeles Dodgers closer Craig Kimbrel top the list of MLB injury news as they impact our July fantasy baseball rankings. We have plenty of other banged-up players that could impact your fantasy baseball lineups and MLB projections this week. If your players have landed on the latest MLB injury report at the start of a new week, be sure to check out the fantasy baseball waiver wire report to find replacements. Also, check out the fantasy baseball two-start or streaming pitcher options if it's an arm you need for MLB lineups. There is a lot of good news in today’s fantasy baseball injury report as we have some guys returning, some getting close, and a couple of injuries that weren’t as bad as first assumed. Before you have too many beers or head out for the fireworks, let's look at the latest MLB injuries and set your fantasy baseball lineups.

Juan Soto left Sunday’s game with calf tightness and wasn’t in the lineup on Monday. He did have a precautionary MRI and told reporters that he was fine. Now, I always say that the player always says he is fine, but there has been no news out of Washington that he was headed to the Injured List or anything. So, I would expect Soto to return in the next day or two. Fantasy players can breathe a huge sigh of relief on that one.

Craig Kimbrel was drilled in the back by a Jake Cronenworth line drive on Sunday and he tried to continue to pitch. However, it obviously didn’t go well as he blew the save and the concern then came for his injury. Dodgers manager Dave Roberts said that tests didn’t show any structural damage, so Kimbrel likely won’t miss significant time and could even avoid the Injured List. It will probably be a few days before he is trusted for a save again, so just keep your eyes on the news about him in the next day or two.

We’ve been following Jacob deGrom's progress every step of the way, and now it seems like he's getting closer. deGrom pitched 1.2 innings in a rehab start at Single-A and he struck out five of the six batters he faced. He did only throw 24 pitches, so the New York ace still has a way to go before he returns. However, I would not be the least bit surprised to see him starting for the Mets coming out of the All-Star Break.

Oakland’s ace left Sunday’s start after one inning with tightness behind his shoulder and, at first, I was thinking this was going to be bad. However, right now the news isn’t bad for Frankie Montas. He is undergoing an MRI to find the extent of the injury, but the feeling is that he could make his next start in the rotation next weekend. Keep an eye on the news in the next day or two and if you have weekly roster moves, you might want to be cautious and sit Montas this week. Still, at least it appears he avoided major injury.

The Red Sox shortstop is not playing on Monday after sustaining a thigh injury when Willson Contreras slid into him at second base over the weekend. Xander Bogaerts needed seven stitches to close the wound. The good news is that he isn’t expected to miss extended time. though, and I would expect him back on Wednesday if he doesn't return on Tuesday to the Boston lineup.

The Dodgers' stud didn’t look any worse for wear on Sunday as he returned from the Injured List. Mookie Betts had two hits and walked twice against San Diego after missing a couple of weeks. Get him back into your lineups right away as he looks like he hasn’t missed a beat.

Michael Wacha was scratched from Monday’s start in what was described as a “heavy arm." Not sure if that is the same as a dead arm feeling, but I would imagine that Wacha will undergo a battery of tests to try to determine what is causing this. If he doesn’t get placed on the Injured List in the next 24-36 hours, I would say that Wacha isn’t dealing with anything serious and could return to the Boston rotation soon.

The Cubs' outfielder was activated from the Injured List in time for Monday’s game. Seiya Suzuki was promptly put back into the lineup at the cleanup spot. He came out of the gate flying high at the beginning of the season before struggling pretty badly before his injury. So, hopefully, the time off will get Suzuki's timing back. Feel free to get him into your starting lineups as soon as you can.

The Reds catcher is starting his minor-league rehab assignment on Monday as he tries to return from the broken thumb. Considering Tyler Stephenson has been out four weeks, it looks like he will be back right around the five-week mark – assuming he plays three or four games in the minors. Get ready to activate him as soon as he is able, and we will likely update his status in Friday’s report.

Another player on the mend is the Cardinals' slugging outfielder. This time, Tyler O’Neill is returning from a hamstring injury he suffered shortly after returning from his previous stint on the Injured List. He will likely get three or four games in for the Cardinals' minor league teams before heading back to the St. Louis outfield. A reasonable expectation would be for O’Neill to potentially get back out there on Friday.

It is the week of the rehab assignment as the Cubs starter is also pitching on the farm. However, things did not go Marcus Stroman’s way in that minor-league outing. He was roughed up for five runs over 2.2 innings, giving up seven hits and striking out just two. The good thing, though, is that he didn’t report a setback – making him closer to returning to the team. Look for Stroman to make another rehab start or two before heading back to Wrigley with the Cubs.

The Braves have activated Eddie Rosario off the 60-day Injured List after the outfielder completed his rehab assignment returning from blurred vision. Rosario got off to an awful start, but you have to wonder if his sight was the issue at the beginning of the season. If you have stashed him this long, be sure to get him back in your lineups now.

As the Braves welcome Rosario back, it is Adam Duvall who is missing a second straight day after being hit in the hand by a pitch. However, the X-rays came back negative and there has been no sign of a move to put him on the Injured List – which you would have thought it would come with activating Rosario if it was going to happen. Look for Duvall to return in a couple of days, but I would keep him out of your lineup this week if you are only allowed to make roster moves once a week in case this lingers longer.

The Reds' rookie starting pitcher allowed one run in 4.2 innings in what likely will be his final rehab start. Nick Lodolo allowed six hits while striking out five in the minor-league outing. He has been pretty successful pitching-wise on his way back and was able to toss 78 pitches in that last start. This should be sufficient that the Reds have seen enough and his next start should be for the big club in Cincinnati. Lodolo was fairly inconsistent in his first three MLB starts previously, but he has a world of strikeout upside.