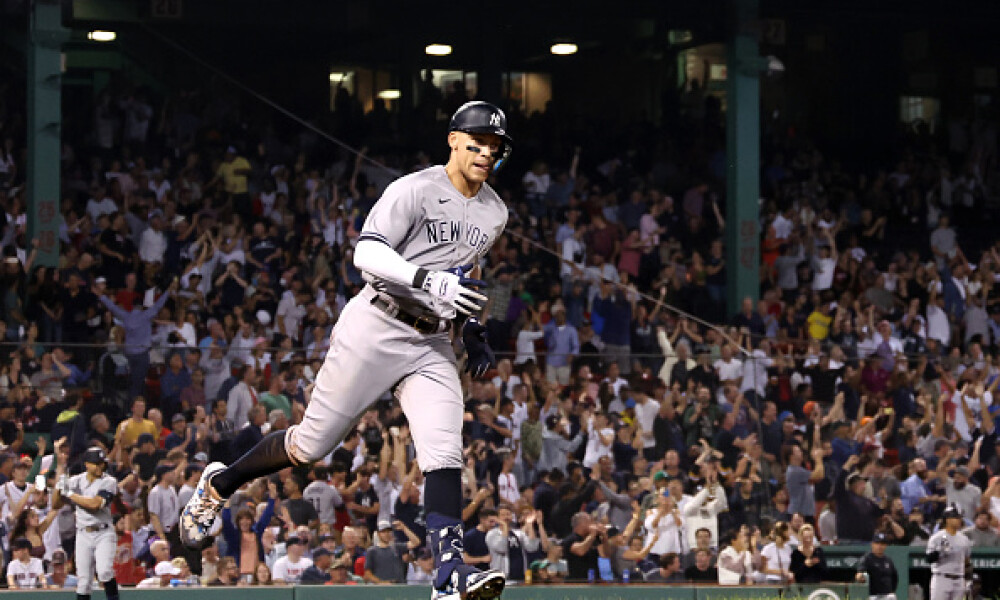 Aaron Judge wants to put no doubt into the thought that he will pass Roger Maris’ American League record of 61 home runs. He clobbered two more in Boston on Tuesday to get to 57 on the year. He has three weeks left to get five homers, which he will surely do. But it’s how much better he is than the rest of baseball this year that is also surprising. You don’t need me or the tweet below to tell you that Judge has been the most valuable hitter in fantasy baseball this year. There’s no reason to doubt he will slow down at all throughout the remainder of the fantasy playoffs.

It was only fitting that longtime Dodger Clayton Kershaw took the mound for the game where Los Angeles clinched the NL West crown with a 4-0 win over the Diamondbacks. He definitely turned back the clock with a seven shutout innings and a five-strikeout performance on just 82 masterful pitches. If he can just stay healthy throughout his playoff run, the Dodgers have the best shot of any team to win the World Series. Kershaw is back to pitching like his vintage self again and is back among the top pitchers in the league.

Even With a Stomach Bug, Alek Manoah Shuts Down Rays

Blue Jays pitcher Alek Manoah was scratched from the first game of Toronto’s double-header on Tuesday due to a stomach bug. But he was apparently good enough to go for Game 2, and I’m sure the Rays are hoping he had just stayed in the bathroom for a few more hours.

That kind of put-the-team-on-my-back attitude has made Manoah a team and fan favorite this year, and he has certainly endeared himself to fantasy managers as well. As he approaches 200 innings this year, the Toronto starter is sitting on a 2.43 ERA with a 14-7 record in the toughest division in baseball.

If young phenom Joe Ryan had been slightly more efficient with his pitches yesterday, he might have had a shot at a no-hitter against the Kansas City Royals. Instead, he had to settle for seven innings with no hits, two walks, and nine strikeouts while cruising to an easy win.

Needless to say, the opinions about whether or not Ryan should have been pulled from this game varied. What is not up for debate, though, is just how valuable he has been for fantasy squads when he was basically undrafted before this year. Through 129 innings, Ryan has a 3.80 ERA with more than a strikeout per inning and 11 wins.

After a frustrating slow stretch recovering from a nagging hand injury, Yordan Alvarez is back doing what he does best: destroying baseballs. He smoked his 33rd home run of the season last night right out of the gate en route to a 6-3 Astros win. In the last week, Alvarez ranks 12th in the majors in OPS (1.336) and his seasonal number is back to 1.000 – third behind the likely two MVP winners Aaron Judge and Paul Goldschmidt.

After seven straight games with a home run, Mike Trout’s streak finally came to an end with an 0-for-3 performance against the Cleveland Guardians. Despite the hitless night, Trout has been on an absolute tear lately, ranking fifth in the majors in OPS while batting .302 with 11 home runs over the past month. Those 11 bombs in 30 days tie Aaron Judge for the most in baseball. After what was thought to be a scary prognosis on his back injury, Trout has shown no ill effects and is once again one of the best hitters in baseball.

Justin Verlander May Return from IL This Weekend

After a calf problem forced him to the IL two weeks ago, Justin Verlander has resumed throwing and will try to return to action this weekend against Oakland. Now neck-and-neck with Dylan Cease in the AL Cy Young race, Verlander will look to post 2-3 more starts in his final tune-up for the postseason.

While trying to put down a bunt in Tuesday’s win over the New York Mets, Rafael Ortega was hit by a pitch and suffered a fractured finger. The injury will likely end his 2022 season. Ortega’s production fell off this year after a .291 average, 11 homers, and 12 steals last season. The versatile outfielder likely falls off the draft radar by time 2023 rolls around.

Brandon Lowe Placed Back on IL

Brandon Lowe’s troublesome back issues will require him to visit the IL for the third time this season, just a couple weeks after returning from his last IL trip. The Rays have missed Lowe’s bat in the lineup this season, but their priority now is getting him ready for the Wild Card round. It’s been a frustrating season for Lowe and fantasy managers, as he could now end the season with just eight homers and one steal.

Less than two weeks after returning from a previous hamstring injury, Avisaíl García was put back on IL Tuesday after not playing since September 10th. The former reliable power hitter is having the worst season of his career, slashing just .230/.267/.316, and his .583 OPS is sixth-worst among all players with at least 350 plate appearances.